When keeping up with the Kardashians goes wrong you end up with rumors and drama. This is nothing new with the popular family, but recently amid a publicly controversial breakup, one of the Kardashians has been rumored to have been dating a new NBA player.

It’s not like it would be inconceivable that Khloé Kardashian is dating another NBA player following Tristan Thompson cheating on her for the (fill in an unusually high rate of infidelity number) time, but she quickly shot down those rumors.

According to multiple blogging websites centered on pop culture, Khloé was rumored to be dating a new NBA player after her breakup with Tristan Thompson, who played for the Chicago Bulls this past season. The whole issue was brought up by a fan who was questioning when Khloé would start dating men similar to those of her sisters (Pete Davidson & Travis Barker).

In response to that fan’s inquiry, a celebrity gossip page (DeuxMoi) posted a screenshot of what seems to be someone in contact with Khloé Kardashian stating that she was seeing another NBA player. When asked who that NBA player was, the corresponding contact couldn’t identify him, stating that their source they got their info from couldn’t identify the player. 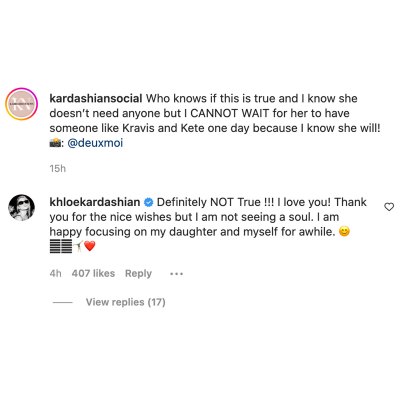 After seeing this post, a fan account quickly reposted it, which prompted Khloé to respond to these alleged rumors, taking to the post herself and explaining to everyone that she isn’t seeing anyone and is focusing on her daughter.

“Definitely NOT True !!! I love you! Thank you for the nice wishes but I am not seeing a soul. I am happy focusing on my daughter and myself for a while.”

Although Khloé didn’t specify any details of who the rumors were about or who they may have come from, she made it explicitly clear that she is only focusing on her and her family. Especially after her last relationship with Thompson went sour.

Thompson, 31, and Khloé went through a nasty public breakup, while trying to co-parent their 4-year old daughter True. Thompson was cheating on Khloe countless times with different women, and eventually got another woman pregnant. After their split Khloé has since been focusing on raising her daughter and growing her brand.

Khloé is one of the founding members of Good American, a female fashion brand and company, that has quickly grown to be one of the more successful clothing brands at the moment. Along with the rest of her family, Khloé’s still a mainstay on their iconic reality TV show “Keeping Up With the Kardashians”.

Though Khloé is an iconic figure herself, it didn’t come as a surprise to many who believed the rumors that she was dating a new NBA player, because not only has Khloé dated her fair share of NBA players (James Harden and married/divorced Lamar Odom), but her family is notorious for dating professional athletes.

Her sister Kim Kardashian, who is working through a divorce after a long marriage with Kanye West, dated former NBA player Kris Humphries,and former NFL star Reggie Bush, while Kendall Jenner has dated Devin Booker, Ben Simmons, and Blake Griffin (on the record).

It seems wherever they go, rumors and drama follow. Khloé Kardashian isn’t worried about dating any NBA players, or finding her next big romance or relationship. She is mainly focused on being the best mother to her child, and furthering her brand and being there for her family.