Dak is this, Dak is that, but Dak don’t know jack, but can Dak rap? Who cares at this point.

After yet another unceremonious exit via injury from Dallas Cowboys mainstay quarterback Tony Romo in the preseason, this time due to a back injury, rookie QB Dak Prescott was elevated from possible third string quarterback to opening day starter.

Those who believe draft order and talent evaluation are an exact science may have scoffed but now what are they saying?

Of course, Prescott’s emergence is something of a surprise. Drafted with the 37th pick in the 4th round, the former college superstar had been dogged by concerns not dissimilar to knocks on other, ahem, “mobile” quarterbacks.

While his athleticism, size and strength had always been applauded, pre-draft evaluators questioned his decision-making ability, knowledge of defensive schemes and accuracy. His poor showing in the Senior Bowl may have had something to do with Prescott falling from a projected 3rd round pick into the 4th round.

But preseason numbers for Prescott had the entire league gassed liked Exxon. In a world where hyperbole is more the norm than not, it was expected that Prescott’s regular season numbers would fall off just a bit. And they have fallen off from the scorching pace exhibited in the preseason. 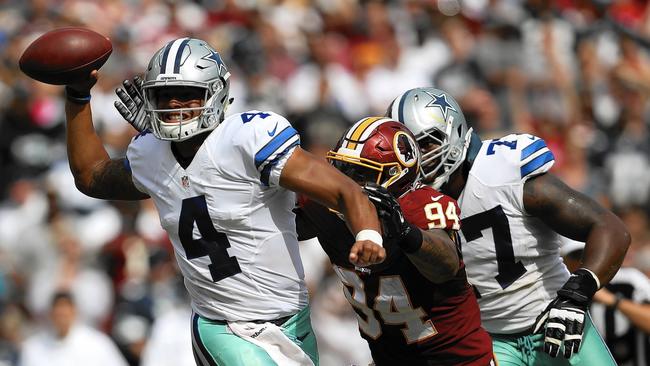 However, he’s still pretty dag-on good. He has completed 62.7 percent of his passes for 519 yards through two games. Also, Dak has been very conservative with running the ball, only attempting three rushes for 18 yards and 1 TD. It is something of a mystery that he has yet to pass for a touchdown considering he has Dez Bryant on the outside, and Cole Beasley in the slot, as well as veteran All-Pro TE Jason Witten as a safety valve. But Prescott also doesn’t have any interceptions either. Proof that he hasn’t forced anything.

In the Dallas Cowboys’ 27-23 win over the Washington Redskins on Sunday, Prescott looked poised and unflustered while his Washington quarterback counterpart Kirk Cousins looked like the very opposite. While it can’t be overstated how early it is in the season, Prescott’s composure juxtaposed against the lack thereof from a four-year veteran like Cousins is telling – even if this is only Cousins’ second year as a starter.

Just days before the season was to begin CBS analyst Tony Gonzalez said these prophetic words:

“Its time…If Dak can continue to do what hes done in the preseason then I dont know if Tony Romo ever gets that job back when he returns from his back injury.”

Next the Dallas Cowboys will play the Chicago Bears and try to get above the .500 mark for the first time in the season. If he doesn’t show up then Prescott’s performance can be chalked up as a rookie let down, but what if he balls out?

The blasphemous whispers of Romo’s imminent demise as Dallas’ respected and protected signal caller will swiftly rise into roars calling for his retirement. That’s just the way the game goes.