Tony Reagins has been breaking barriers, infusing culture, innovating and laying foundations in spaces that lack diversity ever since he served as the fifth African-American general manager in MLB history. During his time leading the Los Angeles Angels front office (2008-2011),  Reagins won two American League West titles and appeared in the 2009 American League Championship Series.

Reagins amassed a record of 363-285 (.560), averaging nearly 91 wins per season and overseeing LA’s first 100-win season in franchise history in ’08, which resulted in Reagins being named the Rube Foster American League Executive of the Year.

Reagins continues to oversee the booming growth of youth and amateur levels of baseball and softball, both domestically and internationally, as well as the streamlining of amateur scouting around the world and operations of the Arizona Fall League.

I get excited every day about being able to do that no matter where I am in the country or in the world. If we have the opportunity to change lives in a positive way then those are the wins.”

It’s In The Numbers

When Manfred took over for his mentor Bud Selig, he went full throttle with the plan to bring Blacks back to the game, drastically expanding MLB’s diversity team, its goals and the funding needed to meet those goals.

Manfred’s first power move was appointing Reagins as Senior Vice President of the first-ever Youth Programs department in the Commissioner’s Office in 2015. Reagins was eventually promoted to Executive Vice President of Baseball & Softball Development. Reagins’ success is backed by statistics and with his current promotion, he will now report directly to the MLB Commissioner.

Since 2015, millions of youth have participated in Baseball and Softball Development events led by Reagins. Some of the more notable youth development programs have produced hundreds of college players and MLB Draft picks.

“Our entire sport has benefited from the dedication and accomplishments by Tony and his team,” said Commissioner Manfred. “We are grateful to have Tony’s strong leadership in this important area as we look to bring baseball and softball to children and communities throughout the world. Tony’s department, which is composed of a diverse mix of professionals based on experience and personal backgrounds, will continue to play a crucial role for our industry with their invaluable work in the youth and amateur levels of our sports.”

Overall, Baseball has grown 20% in participation since 2014, which is the year prior to the launch of ‘PLAY BALL.’  This growth more than doubles the percentage of the second-closest sport (basketball at +8%).  In that same timeframe, baseball has added 2.65 million new participants while casual participation (playing 12 times or less in a given year) has increased by 55%.

Reagins’ department will continue to emphasize and innovate on its U.S.-based model of strengthening participation levels of baseball and softball, both at the grassroots and the development stages.

1. Grassroots Participation – Continued growth of the “PLAY BALL” initiative (www.PlayBall.org), which launched in June 2015, includes multilateral partnerships with USA Baseball, USA Softball, the U.S. Conference of Mayors and Little League International, and features youth engagement events held in the United States (all 50 states, Washington D.C. and Puerto Rico) and throughout the world. The initiative also includes widespread offerings to young people, including the in-school Fun At Bat program and the Pitch Hit & Run and Jr. Home Run Derby skills competitions.

2. Diversity-Focused Programs – Reagins has led the proliferation of diversity-focused programs geared toward the development and advancement of baseball and softball student-athletes. These initiatives include amateur development camps with USA Baseball & USA Softball, such as the Hank Aaron Invitational (which is operated jointly with the Major League Baseball Players Association), DREAM Series, Breakthrough Series (which is inclusive of boys baseball, girls baseball, and softball), and the Elite Development Invitational (which is inclusive of girls baseball and softball).

We tip our caps to the Negro Leagues. #NegroLeagues100 (via @MLB) pic.twitter.com/gc37xF1aP5

Additional efforts include the continued growth of the Reviving Baseball in Inner Cities (RBI) program, which is located throughout the United States, South America, Canada, Europe and Africa. Former Major League Manager Jerry Manuel will continue to serve as a consultant for Reagins in the areas of the amateur baseball development programs.

Other examples of Tony’s influence on the growing diversity in baseball, particularly on the grassroots level.

o   NOTE: 94-96% of alumni in the Hank Aaron Invitational, DREAM Series and Breakthrough Series who have graduated high school are playing (or have played) at the collegiate or professional levels.

Congrats to Chase Call on his commitment to UC Irvine! #COMMITTED pic.twitter.com/cStF2wMoPk 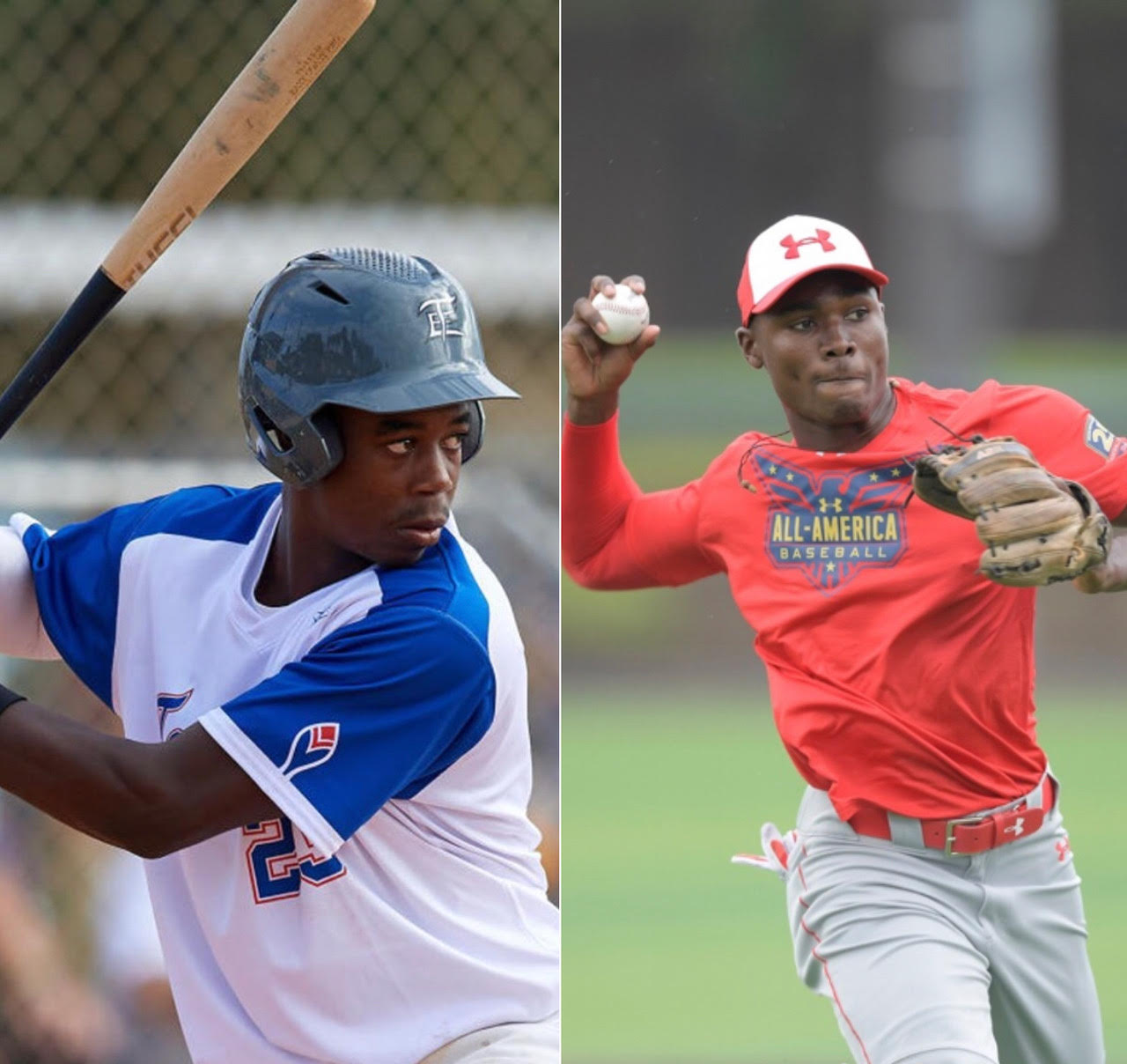 According to Manfred,“…over the past five years about 20 percent of our first-rounders were African-American, and our Youth Academies have been built in communities largely African-American. Almost all of those kids had some touch with one of our Academy programs or diversity series events.  The bigger we make those programs, the more diversity we will attract to the game.”

Most recently, MLB announced the operational responsibility of the Jackie Robinson Training Complex in Vero Beach, Fla., which is the former Historic Dodgertown site once occupied by baseball legends such as Robinson, Roy Campanella and Don Newcombe (among many others). The Jackie Robinson Training Complex serves as a hub for many youth- and amateur -focused programs such as the RBI World Series, Hank Aaron Invitational, Breakthrough Series, Elite Development Invitational, and others.

Earlier, Commissioner Manfred was at the Jackie Robinson Training Complex in Vero Beach where he met and spoke with players of the Hank Aaron Invitational, which has nearly 90% of its alumni who've graduated H.S. playing in college or at the pro levelhttps://t.co/bpBzAVyuq1 pic.twitter.com/oNreXppnlN

4. Softball Growth – As part of the burgeoning partnership with USA Softball, MLB will continue to be the presenting sponsor of the “Stand Beside Her” training tour for the Women’s National Softball Team representing the United States in the Tokyo Summer Olympic Games taking place in 2021.

Once safe to resume, the team will train at the Jackie Robinson Training Complex. Additionally, softball legends and Olympians Jennie Finch and Natasha Watley will continue to serve as Youth Softball Ambassadors for the Commissioner’s Office.

Girls are getting their invites to MLB’s Trailblazer Series! #exciting https://t.co/cMS6qsfq63

6. College Baseball Tournaments – In celebration of College Baseball’s Opening Weekend each year, MLB hosts two collegiate baseball tournaments featuring teams participating in two separate events – the Andre Dawson Classic and MLB4. The Andre Dawson Classic is an effort to highlight baseball programs at Historically Black Colleges and Universities (HBCUs) while the MLB4 tournament features some of the top-ranked programs in the nation.

"This should empower you to go forward and impact the lives of others."

Hall of Famer Andre Dawson spent time this weekend at his namesake college baseball tournament, the Andre Dawson Classic, which features 6 HBCUs.@alysonfooter caught up with him: https://t.co/XjqdRg2vml pic.twitter.com/yBcGXAkPEN

7. Showcase Platforms for Prospects – Reagins will continue to oversee showcase platforms for organizational prospects through the Arizona Fall League and SiriusXM All-Star Futures Game as well as amateur players through States Play and the Prospect Development Pipeline (PDP) League.

8. International Development – Since 2016, the MLB College Showcase Tour has produced nearly 80 players from 15 countries who have continued on to play at the professional or collegiate level in the United States.

.@l_fox24 sees the growth of baseball in his native Bahamas. 👏 pic.twitter.com/l7UK9EfuMY

There’s a baseball renaissance occurring not only in this country but around the world. Reagins and his partner Del Matthews, MLB’s Vice President of Baseball Development, deserve much of the credit.