As you probably know by now, Seattle Seahawks owner Paul Allen owns sports franchises like they’re properties on a Monopoly board. That’s not a statement critiquing how frivolous of a caretaker he is of pro sports franchises. Rather, it’s simply a comparison between the opulent wealth of Allen and Rich Uncle Pennybags, themonocled face of Monopoly.

This year, Allen has a monopoly on winning over the horizons that is microscopic compared to the software giant Microsoft’s pre-2000 heyday.

The Seattle Sounders and Portland Trail Blazers are both contenders in their sports of varying degrees.

Russell Wilson and Damien Lillard seem like two peas in a pod, however, the Trail Blazers spotty defense is too much of a wild card to be counted on once the postseason begins. When you scan the sports scene, I’ve recently wondered whether there is a team that could be considered the NBA’s Seattle Seahawks.  Seeing as how Seattle doesn’t house an NBA franchise anymore, is there a team out there that encapsulates the same virtues as the Emerald City’s Super Bowl champions?

If average age is the prime factor, the Oklahoma City Thunder fit the profile. With an average of 26 years old, OKC could become the third-youngest NBA champion in NBA history if the Slim Reaper continues slaying the league’s elite once Russell Westbrook plants himself back at the point.

Should the Miami Heat complete their improbable three-peat, they’d be the third-oldest NBA champion in league history—and that includes Greg Oden trying to legally pass himself off as an '80s baby.

They’re the equivalent to the Denver Broncos, which boasted the NFL’s second-oldest roster in 2013. Critics are always ready to hound him about his playoff shortcomings despite his two titles and copious amounts of regular season MVPs. Some of it is probably deserved. However, the team he must advance past in the Eastern Conference to claim his third ring is the one that bears the most similarities to the Seahawks.

Only one team perfectly mimics the Seahawks attitude, physical style of play and gradual rise from the cellar to the plaza among The Association’s commoners to the veranda overlooking the playoff also-rans and lottery moochers.

On Monday, Indiana Pacers coach Frank Vogel noted the parallels between his own team and Seattle’s.

“I was inspired by it,” Vogel said to the media on Monday, after the Pacers completed their shootaround at Bankers Life Fieldhouse.

“I see a lot of us in the Seattle Seahawks: a dominant defense. I think defense like theirs is something we can attain in terms of being dominant on the defensive end. What struck me and the message I gave our guys today is they won with their defense, but they had no turnovers. They didn’t beat themselves on the offensive end, and that’s the area we have to get to.”

When LeBron James watched the Super Bowl this past Sunday, he should have identified with Manning’s woes. Indiana is coming for his head with their guillotine defense.

It’s much simpler to complete a pass on an NBA court than it is against Seattle’s secondary, but the similarities between their defense-first philosophies struck me even before the Seahawks turned Manning into Campbell Soup.

Indiana’s answer to the Legion of Boom are the defensive stylings of Roy Hibbert and Paul George who are second and third in individual defensive ratings. At the end of January, their defensive rating was 9.3 points better than the league average which was comparatively better than any previous team in the last 37 years. 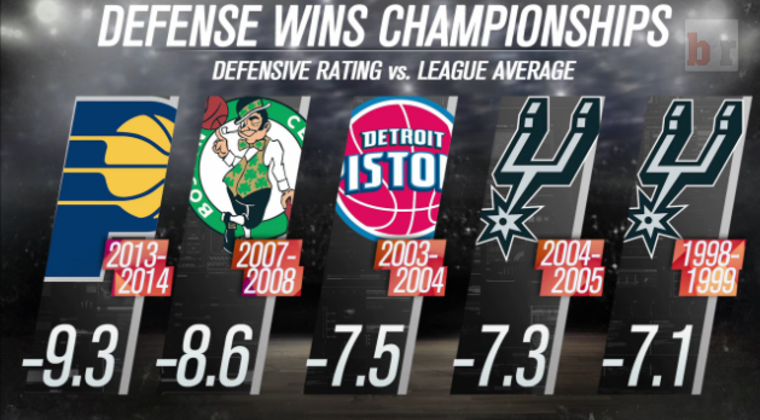 The other four teams depicted in the graphic above won the NBA championship in June.

Amazingly enough, they may have just eradicated their final glaring flaw at backup center when Andrew Bynum was signed over the weekend.

Aside from Bynum, most of the Pacers’ roster is composed of homegrown late lottery and mid-first round picks that were groomed internally. Paul George is the treasured diamond in the rough for Indiana.

Sparsely recruited as a high school prospect, George wound up getting discovered by scouts after his sophomore season at Fresno State. Although, his offensive repertoire has taken vast leaps forward this season, it’s his defense that has anchored the Pacers historically great defense.

Seattle’s bellicose persona came to define their team as a unit and the Pacers have it available in spades.  Prior to his injury, Danny Granger was the most prolific instigator in the league. remember when he made LeBron mad bro?

Lance Stephenson has replaced Granger in the Pacers starting lineup and emerged as a fringe All-Star in what could be the final year on his rookie contract. Like Seattle’s offense, Indiana’s cautious offense has been described as hard to watch at times. However, they can get away with is because of the relic of the past known as a true center.

Hibbert's probably more quotable than Richard Sherman, but the difference is that if he gets slapped with the Crabtree shove, he's pushing back.

Of course, this is a moot comparison if Indiana doesn’t bring the Larry O’Brien Trophy home this summer. Scoring is up league-wide across the NFL and NBA, but it’s a watershed year for historic defenses. The future forecast is looking sunny for Indiana and Super Bowl XLVIII was a reminder that he who can defend, can swipe the crown.

Meaanwhile, the Miami Heat defense is looking suspect this season. Championship teams are often sparked by a transcendent superstar, a Big Three or in today’s NBA, a finesse, small ball unit. The Pacers are nasty, grimy, downright vitriolic towards opposing teams, fueled by their rise from underdog status and anti-establishment. Everything the Seahawks represented and the Heat do not.

The casual fan may not appreciate them bringing offense back to the stone ages at times, but they’re perfect in the eyes of basketball purists.

Even In Loss Nick Diaz Delivers For UFC 266