One could easily make the point that protest is the most American of all things. After all, it was protest that birthed the nation. Both the Boston Tea Party and the Boston Massacre are indicative of that fact.

Today, as half of the American population moans and groans at the election of Donald J. Trump to the highest office in the land, there seems to be more opinions on the appropriate time and place of protest than ever before.

On Sunday, as the Tampa Buccaneers prepared to take on the Chicago Bears, wide receiver Mike Evans sat during the playing of the national anthem. Undoubtedly, the initial blame for this supposed affront to American sensibilities was framed as an action in support of San Francisco 49ers QB Colin Kaepernick’s protest against the domestic oppression of people of color in America.

However, those who attempt to prematurely frame a situation often end up with a picture that is askew. Evans, in step with hundreds of thousands of others across the nation, sat during the anthem to protest the election of a demagogue and xenophobe to the highest office in the land.

“I’m not big on politics or anything like that, but I told myself, ‘If this happens, America is not right right now,” Evans said on Trump being elected. “I said this a long time ago — when he ran, I thought it was a joke. The joke continues.”

Evans went on to state that, while he respects Kaep’s position, his protest had nothing to do with that.

“I know Kaepernick did that,” Evans said. “I’m doing it for a different reason, for how a reality star can be the president. That’s not a good look. … I’m not a political person, but I have common sense and I know something is not right.” 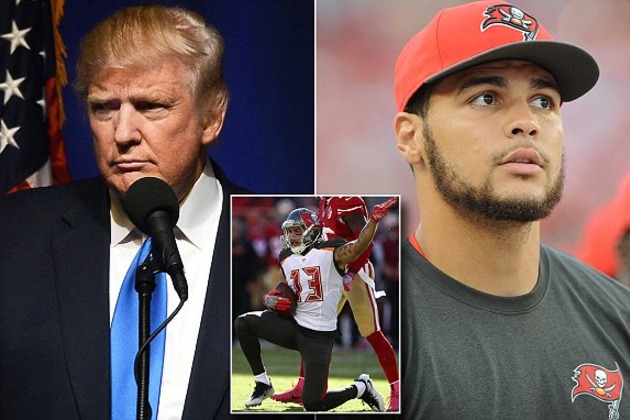 Coming just two days after Veterans Day, Evans told reporters that he didn’t want to disrespect the veterans and wanted to emphasis that point.

“I don’t want to disrespect the veterans or anything,” Evans said. “The men and women that served this country — I’m forever indebted to them. But the things that have been going on in America lately, I’m not gonna stand for that.”

“The Buccaneers are deeply committed to the military and honoring the great men and women that have dedicated their lives and have made great sacrifices to insure all the tremendous freedoms we have in this great country. We encourage all members of our organization to respectfully honor our flag during the playing of the National Anthem. We also recognize every individual’s constitutional right to freedom of speech, which is crucial to the American principles we cherish.”

Evans is only the most recent NFL player who has chosen to exercise his 1st Amendment Rights by sitting out the national anthem.

With his departure in reasoning from those who have taken similar actions in the past, Mike Evans may be the one who opens the Pandora’s box of political dissent among black National Football League players that has been simmering for years, perhaps decades. That is, unless that box’s lid has already been irreversibly torn asunder by prior protesting players.