Tony Allen kicked CP3 in the head during the first quarter of the Clippers-Grizzlies game, but Mike Conley and Zach Randolph had his back, handing LA their first home loss, 106-102. 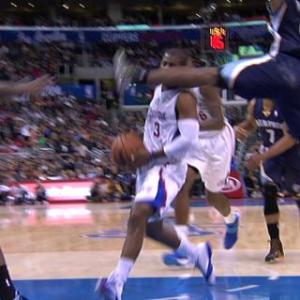 Urban Meyer calls the BCS "unfair" despite winning twice and despite having a loss in both seasons. Stop whining. It's gone next year, so racking up wins against San Diego State et al. might have some benefit.

The Miami Dolphins asked for a delay in the Richie Incognito hearing.

Cam Newton made a big statement in Carolina's 24-20 victory over the New England Patriots, leading the team on a 13-play drive for 83 yards to score the go-ahead TD, but the final plays of the game is what stood out to most fans. Rob Gronkowski was clearly held in the end zone, but the referees picked up the flag that was initially thrown and ended the game.

A fan mailed JR Smith $60 after winning a bet that he couldn't score more points with video game JR Smith than the Miami Heat in NBA 2K13.

Yasiel Puig got a bunch of little leaguers into Dodgers Stadium for batting practice and did not go easy on 'em.

Jhene Aiko released her contribution to the Saint Heron album, "Drinking and Driving."

Tyler, the Creator wrote a blog post about Camp Flog Gnaw and performing with Kanye West. Odd Future then released this track.

President Obama ordered the release of 2,000 NSA documents showing an email surveillance program beginning in 2004 aimed at tracking bookstores and libraries that are believed to have become safe havens for terrorists. Including logs with personal information and credit card numbers, the documents reveal that the court overseeing the program did not deny any of the government's requests from 2005-2011.

Just in case that tears the NSA down, the Pentagon is working on invisibility cloaks.

Greenhouse gasses will set a new high-mark in 2013, with over 39 million tons. Great job all around.

The Senate blocked another Obama nomination.

"Selfie" was Oxford dictionary's word of the year.

George Zimmerman was arrested for pointing a gun at his new girlfriend.

Rob Ford was stripped of most of his power as Mayor of Toronto shortly after this.

Another ScHoolboy Q track hit the web, though it may not be on Oxymoron.