Last week the hashtag #freePalestine exploded when the world and a handful of celebrities showed support by tweeting the phrase. But pro-Israeli fans and organizations jumped down their throats with steel-tip cleats at anything deemed anti-Israel.

Dwight Howard pressed the send button too soon when he tweeted #freepalestine. But 15 minutes later, the tweet was deleted with Howard issuing an apology. The Zionist Organization of America released a terse verbal reprimand of Howard, stating  his apology wasn't enough.

While pop star Rihanna also fell under the ire of pro-Israeli critics after she tweeted a story on the Palestinian conflict and then, like Howard, deleted it. Later telling TMZ that she sent the tweet by accident, the excuse is curious crap being that we all know she would have had to physically type the hashtag in the Twitter dialogue box prior to sending it.

Earlier this month, actor and singer Tyrese sent out a message in support of peace on the Gaza Strip. What followed were international protests and calls of condemnation from around the world by way of his Facebook page.  His message was deleted as well.

For nearly a week the Israeli military has gone on the offensive against targets on the Gaza Strip they say are havens for the Palestinian militia group Hamas.  Much of the bombing has been done by state of the art fighter aircrafts and missiles, neither of which are possessed by Hamas or the Palestinian people.  The aftermath has resulted in ongoing bloodshed. According to the Palestinian Center for Human Rights, 175 Palestinians died in the bombings, including 35 children and 26 women prior to the Israeli army's invasion of the Gaza strip. But since that invasion, the numbers have risen to a ghastly display. Reuters reports the death toll for Palestinians in the two-week conflict recently topped 500 deaths. While on Sunday alone, 100 Palestinians were killed along with 13 Israeli soldiers leading to media deeming Sunday “the bloodiest day in the Gaza.”

Though the politics surrounding the 67-year-old conflict are murky, the facts are irrefutable. The first Palestinian uprising in recent history began in 1987 as the Palestinian people grew weary of an occupation that dated back 40 years.  Decades of attempts by the United States, Great Britain, France, Egypt, Jordan and Saudi Arabia at resolving the hostilities have all been for naught.

While Howard, Rihanna, and Tyrese felt the pressure to delete their Palestinian support, this isn’t the first time we’ve seen instances of backlash. 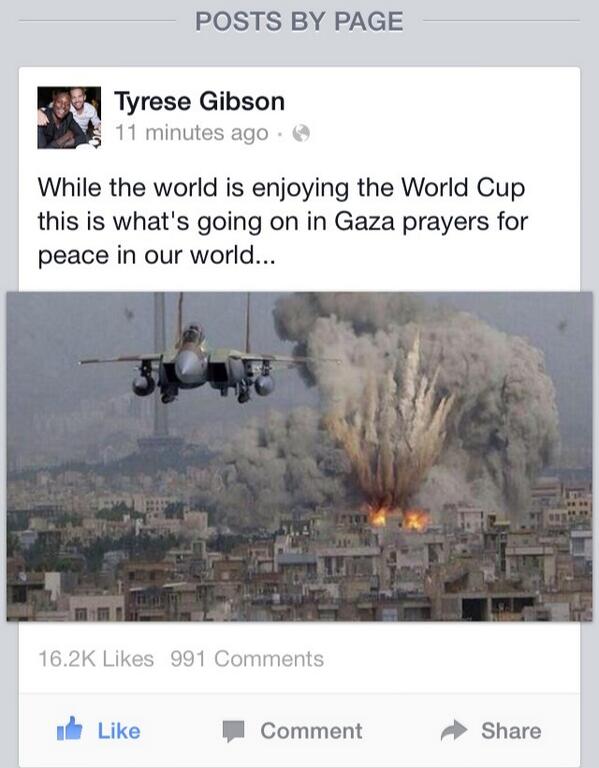 Back in 2012, Whoopi Goldberg came under fire for retweeting a comment that stated Israel “massacres” Palestinians. She quickly backed away from the comment.  While that same year, Kim Kardashian was taken to task for simply saying she was “praying for everyone in Israel.”  After a barrage of vicious tweets, she added “praying for everyone in Palestine and across the world.”

Today, a handful of Black celebrities have remained steadfast in their condemnation of the recent Israeli military offensive.  Producer Swizz Beats tweeted #freepalestine, along with Waka Flocka Flame, and Moroccan rapper French Montana.

Rapper Lupe Fiasco has been one of the most outspoken celebrity supporters of Palestine. In 2011, he released the single “The End of the World.” Featured on his mixtape Friend of the People, the song showcased him rhyming about a Palestinian scarf, one of which he wore at several live performances − most notably the 2011 BET Awards.

Despite the miniscule movement of support, celebrities and media alike are clearly playing coy in how they address the Gaza madness. Their actions are indicative of how many have been muted for speaking up and calling out Israel’s lopsided military campaign, supported by their top co-sponsor, the United States. Few news reports have attempted to look at the situation from the Palestinian point of view, for obvious fear of being called “anti-Israeli” or “pro-terrorist.”

But when innocents die and pictures of deceased babies land on the cover of major newspapers like The New York Times, what country they're from should not matter. Balanced journalism must prevail and celebrities who speak out should be hailed.