“C’Mon Son!!!” is a semi-regular column on The Shadow League where we lovingly tap some fool on the shoulder in order to help them through some personal growth. Today’s moron is former Heisman Trophy winner Johnny Manziel, who continues to prove that the thrilling days of Johnny Football are a thing of the past. He continues to talk a good game while making the dumbest decisions ever.

Im living out here with my guy, Von Miller, Johnny Manziel told TMZ on Saturday night. Everybody knows Von Miller. Super Bowl MVP, Von Miller, my brother. Im living with him right now. Were getting our lives together, bro.

It seemed like a good fit, when taken on face value. After all, Miller overcame the issues that once plagued him, a six-game suspension for violating the leagues drug policy in 2013, to produce a dominant season and a renewed, positive public perception while leading the Denver Broncos to a Super Bowl title.

Perhaps Manziel could receive the peer mentorship he sorely needed in order to get his career on track, or so the thinking went by those who subscribe to the school of eternal optimism. 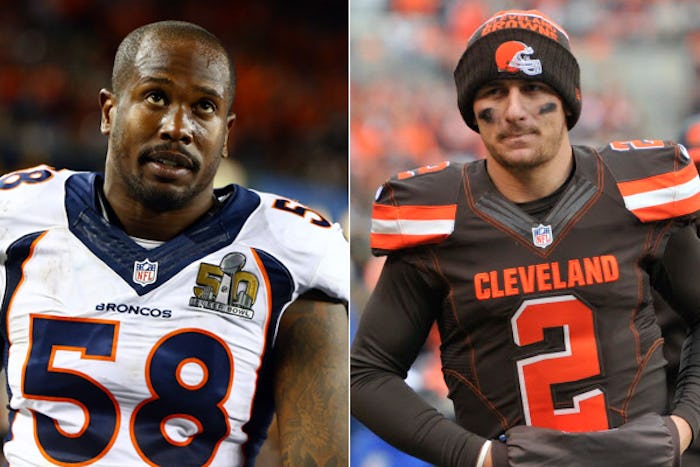 The star linebacker and pass rusher was outspoken in his desire to add Manziel to the Broncos roster, still believing that the former Heisman Trophy winner from Texas A&M, where Miller also thrived in college, could turn his life around and become an asset to the franchise.

“If I had to make my decision on it, he would already be on the Broncos,” Miller told reporters Friday. “But we’ve got guys in the front office that make those decisions, and they put us in championships with those decisions. So I’m just going to follow those guys and have those guys take the lead.”

But shortly after Manziel’s announcement, word seeped out that he was not living with Miller, but rather Josh Gordon, which proved to be yet another poor misrepresentation on Johnny Football’s behalf that further sullies any trust that an NFL team could hope to invest in him.

Many were not surprised at the development, believing that Manziel was long past listening to anyone who could help provide a moral compass in this most crucial time of his failing career.

If the best, most positive role model in all of sports, LeBron James, was unsuccessful in mentoring him in Cleveland, were we really to believe that Miller, or anyone else for that matter, could?

For those who need a reminder, Gordon was suspended for the entire 2015 season after violating the NFL’s substance-abuse policy. He recently applied for his NFL reinstatement  and is now waiting on word from NFL commissioner Roger Goodell.

As for Manziel, most teams are waiting to see how his upcoming Grand Jury hearing on a misdemeanor assault case in Dallas shakes out.

He was accused by his ex-girlfriend Colleen Crowley of striking and threatening to kill her in late January. Court documents allude to her statements that he hit her so hard, she temporarily lost hearing in one ear. She proceeded to file a protective order against him, which was granted.

Manziel, the 22nd overall pick by the Browns in 2014, was waived by Cleveland in March.

If Gordon and Manziel were smart, they’d obviously realize that having their names linked together as roommates, which conjures up images of Animal House, is not in their best interests, considering that they are both known for having substance abuse problems.

To make matters worse according to recent report by Fox News, Gordon failed an NFL-administered drug test last month, although it is currently unclear how that might affect his reinstatement. Either way, it’s definitely not a good look.

Johnny Football was an amazing college quarterback, but his two-year NFL stint has been atrocious. He’s proven, time and again, to be immature and lacking in pure common sense, let alone the heightened leadership that is required from someone who, by nature of the position, is the face of a franchise.

The act has now worn thin, and any goodwill that was once generated by his spectacular play in college is long gone. Despite his crumbling career, and the fact that he’d spent time in rehab, he was still seen publicly boozing in late February at a Miami hot spot.

Granting him chance after chance, while he has proven to be incapable of confronting his self-destructive tendencies, is mind-boggling at this point.

Substance abuse is an equal opportunity destroyer, it has felled some of the most talented and otherwise good people. I have sympathy for his struggle, but it’s about time that he step away from football and prove that he can live a sober and productive life away from the game for a sustained period of time before he’s granted any more chances.

Tim Tebow was a media darling and another phenomenal college quarterback whose skill set could not translate into the NFL. But his opportunities were a byproduct of his high moral fiber, work ethic and innate leadership qualities. I can see teams thinking about adding him to a roster because of his intangibles.

But in the NFL, if you can’t play, even the guys with the greatest character will eventually find themselves in another line of work.

I’d bring Tebow in to show guys how to show up early, how to work hard, how to take care of themselves while studying the playbook and beasting out in the weight room.

It’s just too bad that he throws a football like a wounded duck. But would I go to war with him on my team, even if he’s simply there to be a role model and mentor young knuckleheads while carrying a clipboard as a de facto assistant coach? You bet!

I’ll leave my response in the hands of Bishop Bullwinkle.

C’mon Son!!! Johnny Manziel might as well have stuck a joystick in his hind parts, because he continues to do nothing but play himself.

At some point, it’s time to deal with, as Ray Gibson once said, the consequences and repercussions of his actions.

And right about now, it’s time for Johnny to take his football and go home, until he learns how to play nicely.

And even if he does get it together, he’ll still have something to prove. Because no one is truly convinced, at this point, that he’s anything more than an over-hyped, undersized, privileged, spoiled brat who simply can’t cut it as an NFL quarterback.

Somebody will give him another chance, though. And he better make the most of it because more than likely, it will, and should, be his last.

Do American Athletes Think The Olympics Have Lost Relevance?