He’s also putting up a solid argument for best MLB player of all-time from the Dominican Republic as he is the first of a laundry list of superb players from the Caribbean island to achieve the statistical milestone.

In recent years, DR has become baseballs most fertile and cherished pro breeding ground.There are Dominican players with 500 and 600 plus homers, but none with the longevity consistency and hits production of Beltre, who is already garnering HOF votes from BBWAA writers while still producing, creating and innovating on a high level with the bat and glove.

Yes, 3,000 hits get MY vote automatically. Only 31 players have reached that milestone. It’s an incredible feat. https://t.co/HWGomRX52w

It’s a given that Beltre is one of the greatest third baseman in history. While Manny Ramirez, A-Rod and Big Papi Ortiz stole most of the headlines and juice when discussing the greatest Dominican diamond-miners, Beltre quietly outlasted all of these guys. He has survived any PED suspicions and is halfway home to Cooperstown.

Still kickin’ it with the young boys. Dropping jewels. Keeping it loose.

Despite the 10-6 loss to the Orioles, Sunday was Beltres day. As soon as he smacked a double and reached second base, his children – son Adrian Jr. and daughters Cassandra and Canola – sprinted out of the dugout toward the warning track and unveiled a 3,000-hit decal on the outfield wall in Daddy’s honor. 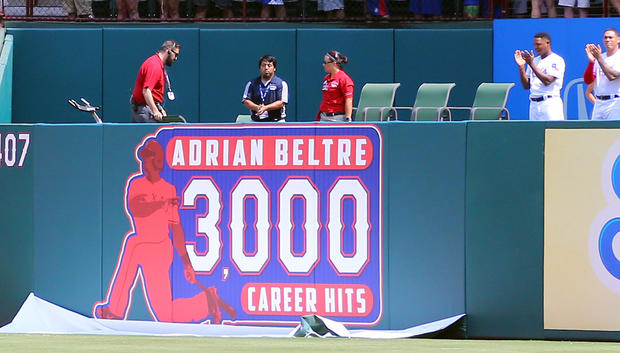 Then Beltre’s family embraced him on the field. 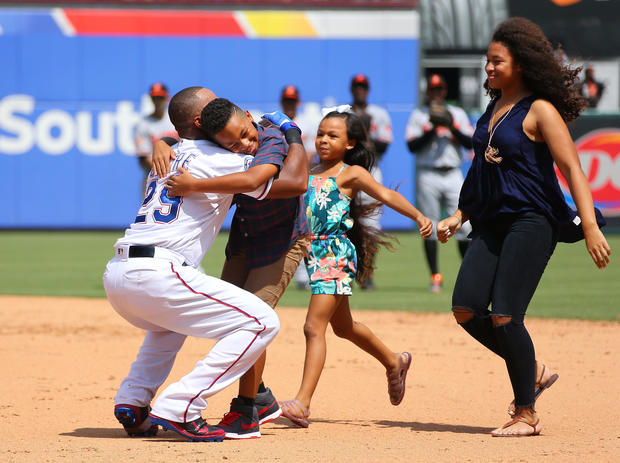 Beltre told reporters that seeing his kids run toward him was the best moment of my life.

I saw the joy in their faces, he said. A lot of things you do in your career, you do for your family. My kids and my wife have been supportive over the years. This was for them.

Beltre is now tied for 30th place on the hits list with another Latin Lord, Roberto Clemente. Al Kaline (3,007) and Wade Boggs (3,010) are next up on Beltre’s rising hit list.

Beltre broke into the game as a 19-year-old rookie with the Los Angeles Dodgers on June 24, 1998, four years after they had signed him. He spent seven seasons with the Dodgers, five years in Seattle and one in Boston before joining the Rangers in 2011 — his first season making it to a World Series.

Beltre is a great example of the term “slow and steady wins the race,” because he wasn’t always spectacular.

But the quality of his consistency, the force of his well-roundedness as a five-time Gold Glove winner with 454 career bombs and the totality of his career makes him a prime candidate for induction into Cooperstown and an example of how baseball can help a kid from anywhere in the world grow into a man with a lasting, meaningful legacy.