Back in 2016, the coach of the Capital City Buccaneers in Providence, Rhode Island got in deep trouble for allowing an 18-year-old to play in a game meant for 13-and-14 year olds.

It was a crazy attempt at gaining an advantage, but players wear helmets in football so it was hard for parents to see the facial hair on the 18-year-old until he was standing on the sidelines without his protective gear.

Apparently Sidney Bouvier Gilstrap-Portley a 25-year-old man who graduated from North Mesquite High School in Texas didnt see how that story unfolded and tried a bit of age-faking himself when he enrolled at Hillcrest High School in North Dallas as a 17-year-old basketball beast of a freshman.

Dallas Hillcrest was led by 6’2 Guard Rashun Richardson 34 points 15 Rebounds #ChrisBoshShootout Coaches he gave the #1 team in the Nation a 40 in 3 quarters a few weeks ago!

Sidney’s intent to deceive the high school athletic system and relive his basketball glory lasted nine months before police realized he was a ringer, arrested him and and booked the cheater into Dallas County Jail.

The man-child has since bonded out,  but the revelation of his true age sent shock waves through the Dallas community. According to several reports, Gilstrap-Portley began the school year at Skyline High School, where he enrolled claiming to be a Hurricane Harvey refugee named Rashun Richardson.

Gilstrap-Portley, who was arrested Friday night, faces a charge of tampering with government records. He has no prior criminal record and his decision to return to the high school court at age 25 seems to be a dumb decision inspired by a love for basketball and the absence of it at a competitive level.

The slick shooter who once played college ball at Dallas Christian College, was a star for Hillcrest’s team for the 2017-18 season and high school coaches voted him the District 11-5A offensive player of the year, leading The Hillcrest Panthers to an 11-10 record. 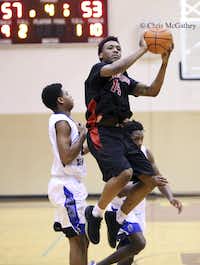 Dallas ISD officials said Gilstrap-Portley’s charade came to an end after one of his former coaches from North Mesquite High School saw him playing at a tournament in April and recognized him as one of his players who graduated from high school seven years ago.

Its a really bizarre story that thankfully ended with no one hurt other than the young players that Gilstrap-Portley terrorized on the court. The administration that allowed him to slip through the cracks and enroll as a 25-year-old freshman have some explaining to do and a revamping of its enrollment system to work out.