The NFLs marketing major, Triple OG character guy and advertising titan is a drug cheat, according to a damning report that aired Sunday night on Al Jazeera America called, The Dark Side.

The report follows British hurdler Liam Collins as he went undercover to expose the continuing use of performance-enhancing drugs in sports. Collins won the trust of medical professionals tied to the PED trade by telling them that he hoped for one last shot of glory at the 2016 Olympics in Brazil.

According to the report, Denver Broncos QB Peyton Manning used growth hormone to help recover from major neck surgery that sidelined the legend during the 2011 NFL season, while he was still King of the Indianapolis Colts.

The shocking and discrediting news about the NFLs Michael Jordan was billed as a six-month undercover investigation into “the secret world of doping.

Of course, the Denver Broncos QB immediately went on the offensive soon after details of the report were leaked on Saturday night.

The allegation that I would do something like that is complete garbage and is totally made up. It never happened. Never, Manning said in a statement released by the Broncos. I really cant believe somebody would put something like this on the air. Whoever said this is making stuff up.

But the damage is already done. Knowing the history of athletes and suspected doping around the world, doesnt give me much faith that Peyton is merely a victim of a foul, malicious rumor. Theres some truth to this. As weve found in past scandals, information gained from unsavory characters and opportunists doesnt make the intel false. Jose Canseco was one of the first snitches to teach us that, when he blew the cover off of baseballs neverending PED scandal.

Manning was back peddling like he was facing the 85 Bears defense Sunday morning , but he refused to flee the pocket. He told ESPN he’d gotten legal therapy at the Indianapolis clinic  including nutrition and oxygen therapy, “but never HGH.”

Thats like walking into the buddha spot, getting arrested in a drug sting operation and telling the cops you were there to buy a bag of onion garlic potato chips. Suspect at best.

The former Super Bowl MVP reportedly obtained the PEDS, which is banned by the NFL, from an Indianapolis aging clinic called the Guyer Institute. The clinic mailed the HGH to Mannings wife, Ashley Manning, so that the QB’s name wouldnt be implicated.

All the time we would be sending Ashley Manning the drugs, a pharmacist linked to the Guyer Institute named Charlie Sly says in a secretly recorded video.

Sly claims that he was a part of a medical team that helped (Manning) recover from the neck surgery.

Like growth hormone, all the time, everywhere, Florida. And it would never be under Peytons name, it would always be under her name Sly said. Its also reported that Manning and his wife also came to the clinic after normal business hours for intravenous treatments, Sly says in an undercover video, although the legendary QB denied that he received treatments at any time other than during normal business hours and indulged with the full consult and supervision of the Colts trainers and medical staff.

“There’s no truth to it,” Fleischer tells The Denver Post. “What they have is a well-known con man from England who secretly recorded a former intern.”

The wheels of pressure already seem to be clamping down on the snitch. We saw this coming as well. In a strange twist of events, Sly, the source behind the Manning allegation cited in the investigative report, posted a video on YouTube saying he’d been videotaped without his knowledge or consent by Al Jazeera and Collins (Which we know because its a secretly recorded video. However, that didnt make Donald Sterling’s words any less authentic did it?).

Sly also told ESPN he dropped famous names and told lies to Collins to “determine whether this guy was legitimate or just trying to steal some knowledge about the business,” The Washington Times reports.

“Someone who worked there said [Manning and his wife, Ashley] had been there before,” Sly says, the Washington Times reports. “That was the extent of any knowledge I had. I feel badly. I never saw any files. This is just amazing that it reached this point.”

“Knowing Peyton Manning and everything he stands for, the Denver Broncos support him 100 percent,” the team said in a statement released on Sunday morning. “These are false claims made to Al Jazeera, and we don’t believe the report.

Despite these denials, there seems to be another full-scale HGH saga unfolding.

Such revolutionary and enhancing drugs are always available. Even as one drug makes the banned list, another is created in some lab somewhere, by some overly ambitious doctor. Some are even undetectable. Players and scientists alike just keep pushing the envelope.

When billions of dollars are at stake, there will always be a market for HGH. Baseball has done a decent job of limiting HGH users, but players are still taking chances, getting caught and serving suspensions. I always assumed HGH, especially for recovery purposes, were widely used in the NFL and was always confused as to why people focus so much on baseball players juicing, when football and basketball players would have every reason and in some cases, more of a reason, to juice — especially to have longer careers and make more money.

This guy, Charlie Sly and the Guyer Institute seems to have replaced BALCO and former trainer Brian McNamee (Roger Clemens chief accuser) as the new hot spot for designer enhancement drugs, the next cutting edge, illegal PED producer and provider for a wide range of celebrities and athletes. 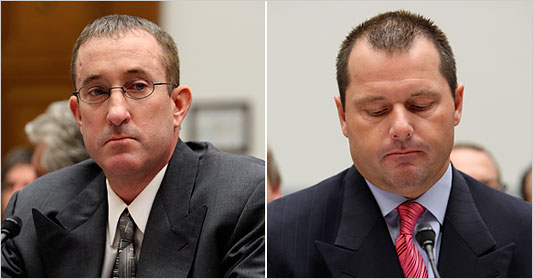 This isn’t anything new. And the way Manning is vehemently denying the use is true to form. Problem is, it just doesn’t add up to me believing he is innocent. He had some of the best seasons of his illustrious career with Denver AFTER his neck was glued together. He had already had a decade and a half of unrivaled success in the NFL prior to making what was termed a “miraculous comeback.” A comeback that further cemented his status as the NFL’s Iron Man.

In reality, Mannings remarkable longevity and sustained excellence is a gift and a trait consistent with the suspected PED cheats of the past few decades in myriad sports.

Manning is just the most popular name listed in the report, which also alleges the Steelers James Harrison, the Dolphins Dustin Keller, Clay Matthews, Mike Nealy and Julius Peppers of the Packers copped drugs from this guy Sly. Some MLB heads also made the report. Sly claims that he gave drugs to Ryan Zimmerman of the Nationals and Ryan Howard of the Phillies. Mike Tyson is also listed as receiving banned drugs from the pharmacist.

It makes sense. These guys are mostly veteran players with a history of injuries.

PEDs are known to help players heal quicker and play longer. The hormone supplement that Manning is accused of using, Delta- 2, was banned by the NFL  in the 2011 collective bargaining agreement and is also on MLBs list of performance enhancers.

According to various reports the drug is not detectable, but is considered a prohormone with an active ingredient that closely resembles that in the designer steroid madol.

Why would the face of the NFL. A role model. And the epitome of class, sportsmanship and doing everything right, allow any banned substances to be shipped to his place of residence at any time, for any reason ?

Another Fraud Or Victim Of BS ?

So far, everyone under the sun has defended Manning and tossed the snitch under the bus. It just couldnt be that the great Peyton Manning had a little help along the way like so many great athletes before him including Alex Rodriguez and Mark McGwire and Sammy Sosa and Barry Bonds and Roger Clemens in baseball.

The steroids related death of former Raiders defensive stud Lyle Alzado and other NFL players is proof enough that the NFL has had an ongoing epidemic equal to baseballs. Those MLB  guys were vilified and demonized for their PED use. Their stats are considered tainted and unofficial in baseball lore. Believing that only track stars and baseball players juice is extremely naive on our part.

Manning is just the first NFL superstar to get implicated. Its the equivalent of Barry Bonds getting accused. Theres no definitive proof, but the writing is all over the wall. The NFL doesnt need these problems. Even if the Colts or NFL knew Manning was juicing, I’m sure they wanted to keep it under wraps until he retired. For this to come out now is a mighty blow to his legacy and the integrity of the NFL. Hes supposed to be an example of the angelic, warrior and a guy who does everything right in a league rife with cheaters, domestic abusers and fringe criminals.

Right now, the Manning shills, loyalists, fans and obsessed will defend his honor until further proof is produced. This entire ordeal may get swept under the rug in due time.

However, something doesnt smell right in Denver and its making football purists and historians dizzy and faint of breath, but its not the altitude. Its the fact that Peyton Mannings attitude towards drugs and gaining an illegal edge might be more embracing than the holier than thou image we created for him. After all, hes only human and as fans, we forget that sometimes.