Jen Welter, the first female coach in the NFL once said, “The ones telling you cant do it are the ones not trying.”

This one statement sums up Welters approach towards life since she first started playing sports on the outskirts of Vero Beach, Florida. Before stepping out onto a football field though, Welter’s first love was tennis. She was ranked in the state, but was told despite her talent that she could never play professional tennis because of her 5-foot-2 frame.

“When I started playing team sports, it was really refreshing and special because I found that the limits that I may have had in terms of my size, on a team if they use me the right way, my size really didn’t matter,” she told the Shadow League in a recent interview.

Her jump into team sports would ultimately lead to her making history and becoming the woman’s face of the NFL one day.

A two-time captain for her high school soccer team, Welter knew she could compete on the football team as well, but the coach asked her not to. He wanted her to sacrifice her potential to protect the pride of male football players.

He said, “You know Miss Welter,  you’re a heck of an athlete. You could help my football team, but I am going to ask you not to play,” she said.

“I was waiting for it to be some answer like, Girls don’t play football, but instead he said, ‘Heres what would happen if you played football. You would make some guy look bad, and one of his teammates would cheapshot you and I would kill him and then go to jail.”

So when Welter discovered rugby while attending Boston College, she called the high school coach and told him she joined a rugby team, to which he said, Oh yeah, that’s perfect for you.

Welter shined in rugby and was eventually recruited for the Under-23 National Team. Once again though, she was told she was too small to play.

“So then I thought it was pretty much the end of my athletic career, ” she said.

In a small way, those rejections led Welter to take a path that she had never envisioned. While playing flag-football, she was recruited to try out for a women’s football team. Excited for a new opportunity, her past experience of being pushed to the side because of her size remained at the forefront of her mind. “I never feared getting hurt, I was just afraid of getting told that I was too little again, she said. I tell people that story because everyone is like, You must have been destined for greatness, but I was actually the one who was underestimated and undersized my whole career.

In this case, size did not matter.

At 23 years old, Welter joined the Women’s Football Alliance, playing fourteen seasons, mostly with the Dallas Diamonds. She then went on to win Gold with Team USA at the International Federation of American Football’s Women’s World Championship in 2010 and 2013.

In the midst of competing, she earned her doctorate in psychology, completing her dissertation on the relationship between the Wonderlic test and the success of NFL quarterbacks.

Welters testament to staying open to opportunities and not letting fear dictate choices opened the door to coach a men’s team, the Texas Revolution, in the Champions Indoor Football League.

“I never once dreamt of the NFL, Welter tells The Shado League. “There was no one I could look to and say I wanted to be her when I grow up, so it didn’t seem like a possible reality to me.”

So when the Arizona Cardinals called with a proposition, she knew she had to take it.

“To me, it wasn’t something that I set out to do, but I’m really glad I took that path, she said. It was very powerful men in coaching who saw something in me, probably before I saw it in myself, and I am eternally grateful that pushed me to step out of my comfort zone.”

During her one month-internship with the Cardinals, people were curious how football players, who most likely had never had a female coach in their lifetime, would respond to Welter.

I never found the guys to be as worried about a woman being there as the outsiders were, she said. It was really pretty easy. Of course there are going to be awkward times, but you choose how you respond to it.

When Welter completed her time with the Cardinals, she realized that sports truly transcends gender.

“I learned both about myself and about the guys in [NFL], that there was a lot of misperceptions about these football players, she continued. They thought these guys would never take coaching from a woman, and yet I learned that if you can help them and make them better, they’ll listen to you regardless of gender.

It had nothing to do with gender. To the players, we were more alike than different, we were all football players. That situation definitely reinforced my belief that diversity is a strength and when we are authentic to ourselves, we can always add value to a situation.” 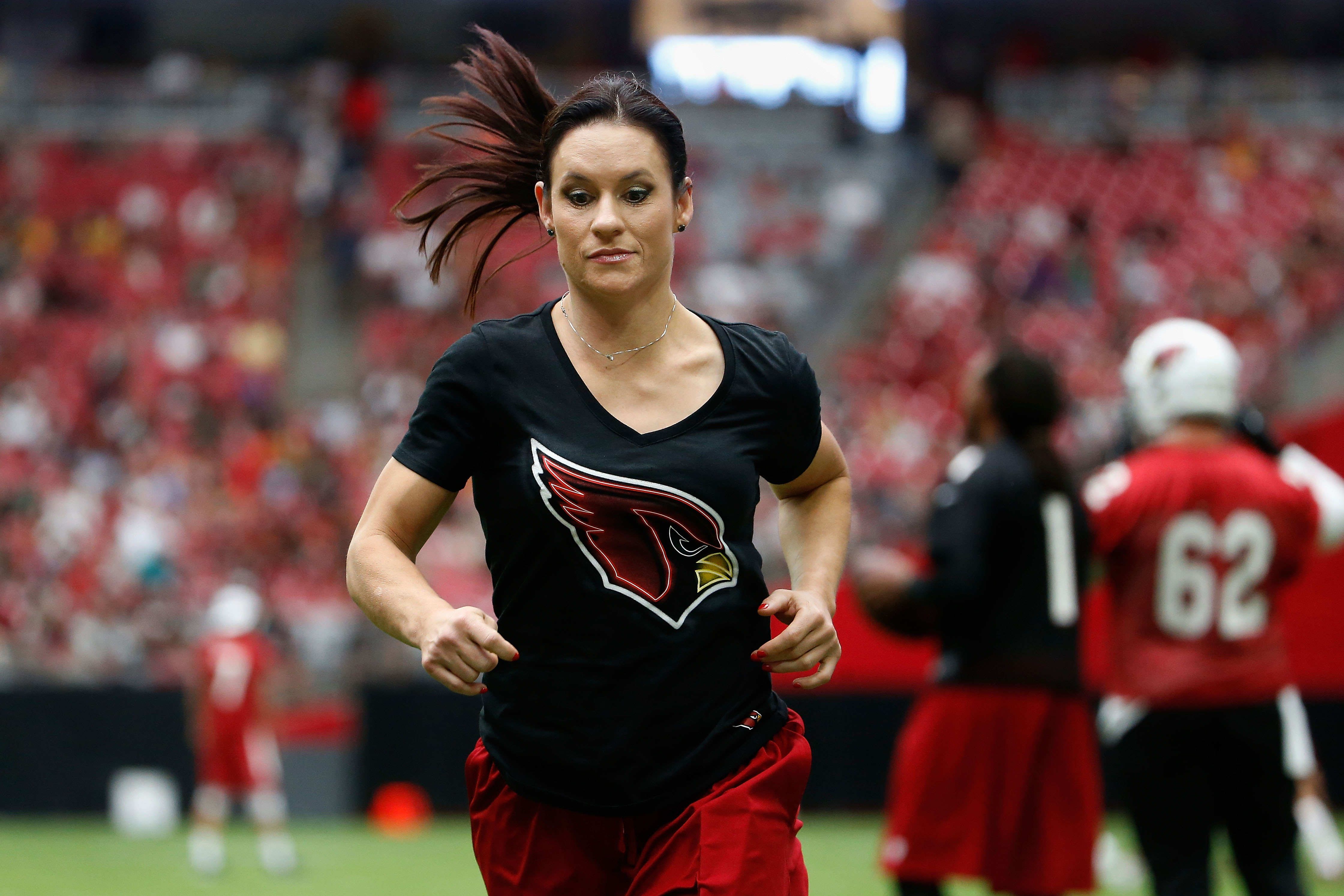 Now she welcomes any opportunity to share her story in the hopes of inspiring other women, whether being a keynote speaker, participating in panels, and sharing her story.

“Now I have girls who tell me that they want to coach in NFL when they grow up, she said. That’s a really powerful shift because when girls see themselves being able to walk in someone else’s shoes or coach in their cleats that’s a pretty powerful thing. We also cant overlook the impact it has on guys because it can change what they define as a coach.

As the postseason kicked off in January, six of the eight female coaches currently within the league were on the sidelines for playoff teams, and for the first time in NFL history, opposing playoff teams had women coaches on their sidelines when the Washington Football Team hosted the eventual champion, Tampa Bay Buccaneers.

What she hopes women in particular gain from her story though is to never limit themselves. “I think there has never been a better time to be a girl or a woman in football,” Welter said.

“You’re not entering a man’s world to be a man. Realize in some situations that’s what makes you different, actually makes you special, and an asset…Be willing to step up to a challenge and be willing to push yourself. Sometimes you have to have bravery and humility and realize you’ll never regret trying.”