We have been aware that award-winning author and writer Ta-Nehisi Coates would be writing a new Black Panther comic book since last year. Though many fans were wowed by the majestic manner in which the Black Panther aka T’Challa was portrayed by actor Chadwick Boseman, those in the comic book community have always had their own idea about T’Challa, his capabilities and what he stands for.

However, in A Nation Under Our Feet, Coates brings the reader to a rare point of uncertainty in the life of the Black Panther. It takes place after a series of catastrophic events that began with in Avengers Vs. X-Men #7, when Namor of Atlantis, powered by the Phoenix Force, laid waste to Wakanda with a flood. That was followed by a coupe that was incited by Dr. Doom and the seeming demise of his sister Shuri, who had been acting as head of state and Black Panther while her brother was away before presumably dying in defense of her country against Thanos: the Mad Titan. 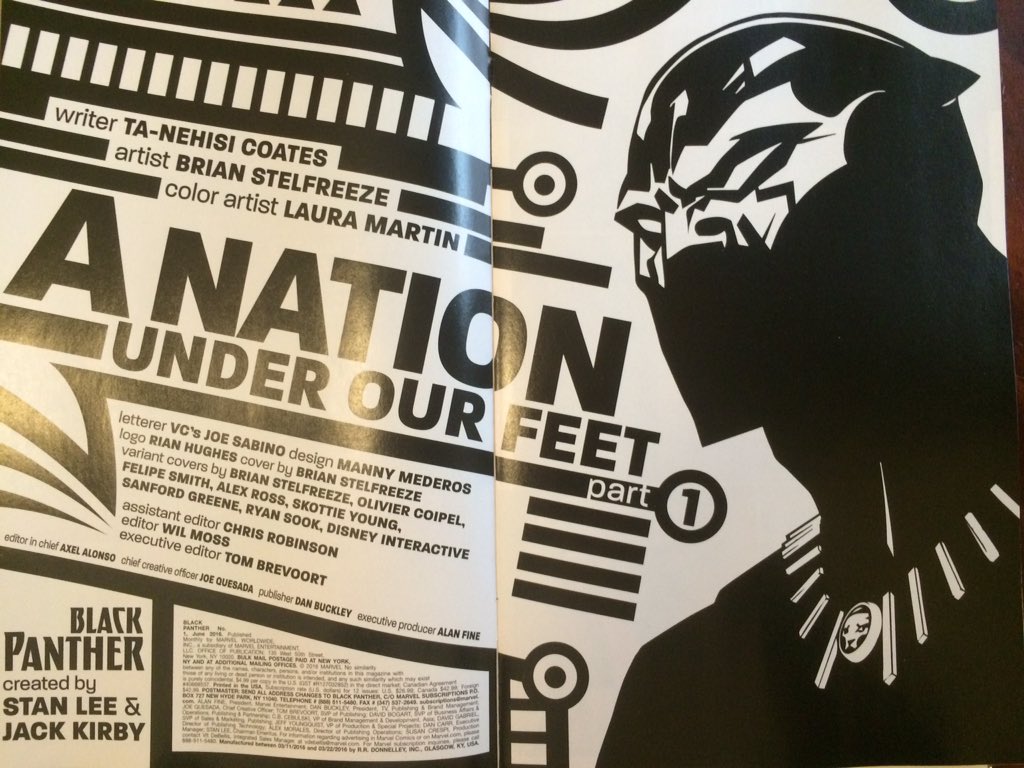 In issue #1 of Black Panther: A Nation Under Our Feet, we see that Wakanda, once the envy of the entire globe for its vibranium resources, stability and technological prowess, is now in the midst of a revolt from the lower class which is being spurned on by a metahuman terrorist organization called The People.

Other writers have had the Black Panther deal with complex domestic issues in the past, such as the multiple times that Man-Ape of the White Gorilla Cult has attempted to take over Wakanda.  However, no one has ever penned a book where T’Challa is seen as the bane of his people rather than their protector and savior.

In this offering, we find T’Challa full of uncertainty as he looks to track down a woman named Rage, who he believes used her powers to incite a riot between striking vibranium mine workers and the military and is responsible for the disdain his countrymen are feeling toward their King. Some comic book traditionalist may take umbrage to the slow pace of the first issue, but I was cool with it because I believe that Coates was trying to set the tone for the other three books in the series.

We learn that Ayo and Aneka, two Dora Milaje (royal bodyguards to the King) have decided to rebel against the crown family of Wakanda after Aneka is sentenced to death for killing a rapist. Indeed, these two individuals are featured quite prominently in the first issue and it is obvious that Coates will continue fleshing out their purpose as time goes on. Fans of Captain America: Civil War may recall the brief but impressionable performance given by actress Florence Kasumba as one of the Dora Milaje.

I have been reading comic books since 1979 when I was six years old. Black Lightning and Black Panther were among my early favorites, and I have never read or seen him more uncertain of himself. This is the man who has bested some of Marvel’s greatest heroes and villains with his hands and repulsed an invading Skrull army with nothing but spears and swords, but not only is he clearly conflicted in some of his actions, the reader slowly begins to question where his head is as well. It is apparent that Coates wanted to make this as difficult a time as possible for T’Challa and present problems that he can’t simply fight his way out of. Artist Brian Stelfreeze was masterful in designing and drawing much of this fictional African nation out of multiple African tribes and civilizations dating back to antiquity.

The tattoos, garb, buildings and habitats are something out of an Afrofuturist’s dream. He uses a great deal of shadow on faces to accentuate mood and intent. Stelfreeze’s articulation of facial expressions is masterful as well.

Color artist Laura Martin masterfully painted the Wakandans beautifully and with varying degrees of melanin.  Though she colored the entire book well, the way she gave them color and life brought dignity and humanity to each character.

I absolutely loved this book.