We place too much value on style over substance in basketball these days. For years, the same gibberish has been ricocheting around the NBA landscape, an often-repeated refrain that says, “The San Antonio Spurs are boring.”

I hope you’ve had a chance to watch San Antonio work thus far in this second round playoff series against the emerging Portland Trailblazers in order to understand how gross that misperception is.

If you think they just run through robotic sets, and don’t have any personality, you don’t have a discerning eye. Because the subtle flair and creativity that Tony Parker, Manu Ginobili, Kawhi Leonard and Tim Duncan display within the context and structure of their offense is really rather electrifying.

They carve up opponents like Dr. Hannibal Lecter on some Quid Pro Quo stuff, and they do it  in every offensive chamber imaginable: in the paint, in transition, out on the perimeter and in a grind-it-out, 24-second-milk-the-shot-clock half-court set.

In last night’s 114-97 victory, Parker was again majestic with his 16-point, 10-assist masterpiece of a floor game, while Kawhi Leonard connected on 8 of his 9 shots for a team-leading 20 points. And, oh yeah, in addition to the always Ultramagnetic M.G. aka Manu Ginobili, the other reserves like Marco Belinelli, Boris Diaw and Patty Mills create their own scenario of matchup nightmares for an opposing coach.

Since we’re percolating with the current excitement of the NFL draft, calling the Spurs boring is like ESPN draft guru Mel Kiper Jr. pontificating his esteemed analysis that Penn State running back Ki-Jana Carter could be the next Bo Jackson, or that  LSU’s JaMarcus Russell would be an elite, top-5 quarterback one day. Yeah, OK, and Eddie Murphy deserved an Oscar for his work in Norbit.

I’ve never understood the whole boring label that San Antonio’s been given, and never will. Because in actuality, the Spurs are the most exciting team in the NBA. And have been for quite some time.

Allow me to quantify that for everyone whose body involuntarily ‘Nae-Nae’ gyrates when Xavier Henry catches a wide-open, uncontested dunk.

Before you dismiss me as being curmudgeonly, please know that I love the dunk. I grew up on it, was nourished on its beautiful bosom by the revolutionary flight games of the incomparable Dr. J, Houston’s Phi Slamma Jamma, Dominique Wilkins, David Thompson and many of the progenitors of today’s high-flying rim-wreckers.

But a dunk is not a dunk unless you actually dunk ON somebody. Hard! (Will somebody please pass this message along to ESPN Top 10 headquarters in Bristol, Connecticut)

If not, to quote Clarence the Barber from Coming to America, I don’t care if you did a front-flip, 720-degree Jammy, a wide-open dunk that isn’t rammed in somebody’s grill “Ain’t nothin’ but a Ultra-Perm.”

By exciting, I don’t mean having a bunch of athletic freaks that can dunk a basketball with the back of their neck. Or a bunch of narcissistic exhibitionists who gyrate and do the goofy goggle thing when they hit a wide-open three-point shot. Exciting is not watching a guy pop-and-lock like Rerun on the Gong Show after he’s made a difficult shot.

That may be exciting to this microwaveable generation who grew up on And-1 videos, with the notion that NBA Street on a PlayStation video game console was real basketball. But that ain’t real basketball.

Exciting is watching the game being played at its highest, most efficient and beautiful levels. And that’s what the Spurs do. With an emphasis on ball-movement, spacing, a mastery of the pick-and-roll and one of the greatest big men the NBA has ever seen.

If it’s taken you this long to arrive at the party, it’s not too late for you to finally appreciate the magic and wonder that is Tim Duncan. Yes, he’s past his prime. But in short, stunning bursts, he still reminds us why this franchise, along with the Miami Heat, is the league’s Gold Standard.

I propose that we use this year’s playoffs to pay homage to a true national treasure, and take every moment possible to cherish the last vestiges of the player known as ‘The Big Fundamental.’ Because his brilliance is fleeting, the end of his remarkable career very near.

If it weren’t for a destructive tropical storm in 1989 that hit the U.S. Virgin Islands, the intense ray of sun that has warmed and nourished the hoops landscape for close over twenty years now, aggregating his college and pro career, might have remained hidden under a cloak of obscurity.

Prior to Hurricane Hugo, he was a wunderkind of another kind, a 13-year-old competitive swimmer on the island dripping with Olympic potential in the 50-meter, 100-meter and 400-meter freestyle events.

On the day before Tim’s fourteenth birthday, his mom transitioned into the spiritual essence after succumbing to a brief battle with breast cancer.

“The hurricane broke Tim’s routine by taking away our pool,” his sister Tricia told Sports Illustrated in 1995. “Then when Mom passed, he lost his motivation.”

He gravitated toward the backboard that was attached to a pole right outside of his front door. His older sister, Cheryl, had given it to him as a Christmas present. His pops, a mason by trade, had secured it so firmly in the ground that even Hugo’s vicious stealth could not remove it from its foundation.

Tim embarked on his hoops apprenticeship in games of one-on-one with his brother-in-law, Ricky Lowery, a former Division III basketball player. Lowery taught the 6-foot, 14-year-old Duncan the guard game and perimeter skills from the outset.

An eight-inch growth spurt in high school transformed him into one of the tallest men on the island. He starred as a senior at St. Dunstan’s Episcopal High School, averaging 25 points per game, while incorporating his perimeter skills into the subtle, yet intricate manifestations of post play.

But due to his geographic isolation, only Wake Forest, Providence, Hartford and Delaware State had shown an interest in offering him a scholarship.

Wake Forest coach Dave Odom went after Duncan harder than any other college coach. His prescience came from a scouting report that former Demon Deacon Chris King assembled when had toured St. Croix with an NBA rookie team. 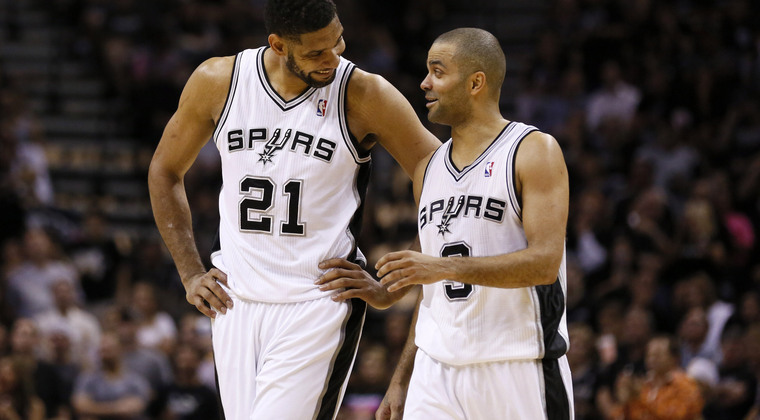 Wake had actually planned to redshirt him as a 17-year-old freshman. They thought he’d need a year of seasoning in practice to get ready for the ACC. But when Makhtar Ndiaye, a big man from Senegal, was ruled ineligible, Odom had no choice but to throw Duncan to the lions.

And in the midst of all of that talent, the Demon Deacon coaches, players and fans soon found that Tim Duncan was not merely ready to compete. He was, they’d soon learn, the new king of the college basketball jungle.

It only took 51 games for Duncan to set the school record for blocked shots. As a sophomore, he led the Demon Deacons to the ACC Tournament championship. In the ensuing NCAA tourney, he dominated Bryant “Big Country” Reeves with 22 rebounds, 12 points and eight blocks in Wake’s narrow Sweet Sixteen loss to Oklahoma State.

After his superb sophomore year, where he averaged 16.8 points and 12.5 rebounds per game, the ACC’s other elite second-year studs – Maryland’s Joe Smith and North Carolina’s Jerry Stackhouse and Rasheed Wallace – made the jump to the pros. They were among the top four picks in the draft. And the consensus was that had he come out, Duncan would have been selected #1.

As a junior in ‘95-’96, he put up 19.1 points and 12.3 rebounds per, and repeated his reign as the ACC Defensive and overall Player of the Year, while spearheading a run to the Elite Eight.

During his final year, he posted 20.8 points, 14.7 rebounds and 3.2 assists per game while shooting 61% from the field. He won the Defensive Player of the Year for an unprecedented third straight season. He added another first team All-American nod, a psychology degree, and the universal recognition as one of the college game’s greatest players. EVER!

As an NBA rookie, he grabbed 22 boards in his first game against Dennis Rodman. After hitting Charles Barkley up with his arsenal of simple but effective low-post moves and array of pump fakes, spins, up-and-unders and mid-range bank shots, along with some tough rebounding and defense, Sir Charles was moved to say, “I have seen the future and he wears number 21.”

Throughout compiling his first-ballot Hall of Fame credentials over his remarkable 17-year pro career, Duncan has maintained the same mild-mannered, quiet elegance that he exhibited back at Wake Forest.

It’s easy to appreciate the majesty and sheer dominance of some of the game’s current greats like LeBron and Kevin Durant. But savoring Tim Duncan takes a little more of a concerted effort.

Ya’ll can call him Spock if you want to, but I’m privy to the nickname ‘Sun, Moon, Planets and Stars’. Because there aren’t many more wondrous and comforting experiences for a real hoops fan than watching Timmy operating within the glow of his genius.

Since the minute of his pro arrival, the San Antonio Spurs have contended for championships. EVERY YEAR!!!

He just went about his business of winning titles and MVP’s, putting together a scrumptious resume behind a stunning, vicious arsenal of skills that is remarkably nutritious in its simplicity, without adhering to the Antoine Walker school of shimmying or Calvin Murphy’s “Pocket Rocket” school of acquiring Baby Mama’s.

He didn’t touch a ball with earnestness until he was a sophomore in high school, was nowhere to be found on the recruiting rankings and incubated in a remote outpost that was far from a basketball hotbed.

But nevertheless, he has become the best power forward ever. And for the remainder of this year’s playoff run, we should watch him with a mixture of joy, for what he does, and sadness with the recognition that his career is reaching its sunset.

Coach Pop, Timmay, Manu, Tony Parker, Kawhi Leonard and the rest of the Spurs crew have something special marinating this year. I hope you don’t miss out on it because you’d rather watch a Ben McLemore dunk than some impressive, great basketball.

So go on again and tell me the Spurs are boring. Go ahead. And I’ll give you the same response Tony Montana gave Elvira when she called him boring, dismissing the sheer absurdity of it as he ignored her, looked at his homeboy and said, “Manny, look at dee Peleecans fly. C’mong Peleecans!”