I’ve been sitting back over the last two weeks, like Bill Duke’s character in Menace to Society as he sits across the table from Kane, legs crossed, calmly flipping through the case folder during the film’s classic interrogation scene. 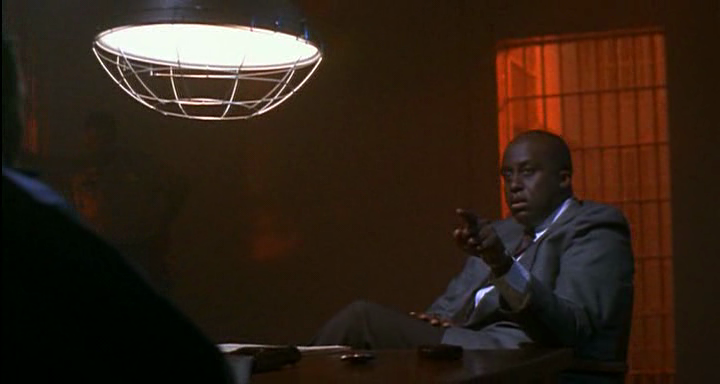 Examining all of the debate about the Seattle Seahawks Richard Sherman, trying to make sense of the vitriol he stirred up with his now legendary post-game interview with sideline reporter Erin Andrews, I laughed at the sinister comments from the nation’s peanut gallery, claiming that Sherman was, among other things, all that is wrong with the world of sports, a thug, obnoxious and classless.

I laughed, not because it’s funny, but because it’s a coping mechanism that helps me deal with the senseless idiocy of that visceral and intuitive reaction from a certain segment of the populace, black and white alike.

It was humorous to me, because I’d never heard tennis great John McEnroe or Hall of Fame Major League Baseball manager Tommy Lasorda or Oklahoma State football coach Mike Gundy labeled as thugs, and their various archived rants, in comparison, make Sherman’s look like President Obama’s State of the Union address. Oh, my bad, those guys were just passionate, right?

But that’s not really my point here. We understand the dynamics of the country’s reaction to Sherman’s reaction. It’s been exhaustively examined and intelligently articulated over the last few days, so I’m not going to beat that dead horse.

Honestly, I’m more perturbed at the hypocrisy of the NFL as it relates to performance enhancing drugs, when we’re inundated with ads for Cialis and Viagra during league broadcasts, causing some uncomfortable and awkward moments for me as I watch the games with my teen and pre-teen daughters. But that’s another story for another day.

I just find it interesting that in a society defined by the Selfie, where our celebration of, and unquenchable thirst for, divisive partisan politics and the dim-witted, where we make people like the cast of The Jersey Shore and The Real Housewives of (pick a city) rich and famous, that there are those with enough unmitigated gall to angrily say that Sherman is selfish, that he should have been calm and talked about the team rather than bashing his opponent.

Maybe it’s because I come from an environment where trash talk is the norm that I see it as a non-issue. Shoot, before dusting me off in a game of checkers, my own grandmother would go off on a diatribe similar Denzel’s Detective Alonzo Harris – “Shoe Program! You’ll be playing basketball in Pelican Bay when I get through with you!!!” We are the most narcissistic society the world has ever seen, with our plastic surgeries, silicone implants and the objectification of our women. But people have an issue with Richard Sherman because he was hyped about his performance and shouted about it after the game on live television? C’mon man! People need to get real with themselves.

The obtuse reaction took me back to a situation a few years ago with another young, black and gifted NFL defensive back, a circumstance that was unfortunately more serious and heart-wrenching. It reminded me of the immediate reaction to the news that Washington Redskins All-Pro safety, Sean Taylor, had been shot and killed.

Before he succumbed to his wounds and the facts came out, some in the sports media despicably passed judgment on Taylor, who they also branded a supposed “thug”, based on league fines he accrued, his reputation as a vicious destroyer on the field, his legal issues and the so-called disrespect he showed the almighty NFL by skipping out on a mandatory rookie symposium. They rambled about his murder as some possible payback vendetta and spewed diarrhea about how little he spoke to reporters and how many agents he fired prior to his rookie year.

With Taylor still in the hospital clinging to life, I was driving, listening to a local sports radio talk show in Baltimore, as the host flippantly blamed the victim, saying, “Where there’s smoke, there’s fire.” Her co-host, a retired NFL player who wasn’t articulate enough to recite his ABC’s on Sesame Street and had no obvious capacity for compassion or deep thought, ranted about Taylor’s alma mater, the University of Miami, for the thugs and the violence that it has supposedly produced.

ESPN’s Jason Whitlock, who was then working for foxsports.com and as a columnist with the Kansas City Star, as he is prone to do, went above and beyond with his own brand of foolhardy rhetoric, saying that Hip Hop and the “Black KKK” was responsible for Taylor’s murder.

So, let me get this straight, Tupac and Biggie, according to Whitlock’s mental midgetry, killed Sean Taylor, just like Kanye West robbed Eddie Curry and Antoine Walker at gunpoint during their respective home invasions?

Sean Taylor was where he was supposed to be the night he was killed, at his home, in bed with his fiancé and daughter, a home he purchased for his mother to reunite a fractured family. He’d been killed by people who’d attended his younger sister’s 21st birthday party, some jealous haters and crabs in a barrel who were envious of his life, wealth and material possessions.

Taylor was a target, not by sinister Hip Hop, or a “Black KKK”, thank you Mr. Whitlock, but of criminal predators. His lone responsibility for his own death was simply being rich and helping his family to have something better.  Through the filter of time, the collective memories of those primitive reactions have faded away though, as they will in a few years as it relates to Richard Sherman.

Unfortunately, we live in a microwave society proliferated with irrational and judgmental people, who have no clue as to the depth of their own selfishness and neuroses, a bunch of Cliff Clavin’s walking around wanting to be the next Skip Bayless.

I’d love to sit them all across from Bill Duke in that interrogation room, so they can feel trapped within the guilt of their own preconceived notions, as he stares and points and wags his finger, telling them something along the lines of, “You know you done messed up, right?”