The NFL and its trusted officials left Cam Newton out to dry last night and something didnt feel right to me about it. He took several blatantly dirty shots to the head, and the referees seemed to turn the other cheek on the severity and cheapness of the blows.

There was one flag thrown despite the fact that Cam took about 10 illegal hits in Carolinas 21-20 opening night loss to the defending Super Bowl champion Broncos on Thursday.

And honestly speaking, those dome blows definitely had Cam looking shaky in the waning moments of the game.

For a guy that is supposed to be the No. 1 QB in the NFL, Newton got a rookies respect from the officials, even though he was the reigning MVP facing a seventh-round rookie who never even took a snap in the the NFL.

The entire crew should be suspended.

The first malicious hit came in the third quarter, when his helmet connected with Von Millers.

The second came on the Panther’s final drive of the game. It was a straight-up illegal shot by Denver safety Darian Stewart.

Newton was also targeted with a blow to the head by Broncos outside linebacker Shaquil Barrett. There were so many, that YouTube doesnt even carry them all. Cam suffered another helmet hit the fifth of the night, according to FOX Sports’ Chris Chase, and the first that drew a flag. However, that flag was wiped out by offsetting penalties, which is indicative of how the night evolved.

Once a player lunges at you with intent to injure and maim and its allowed to rock, then any lighter infraction such as grabbing a QB’s head after a throw doesnt even get acknowledged.

Once the Broncos saw that the stripes werent going to legislate their dirty play, it was open season on Cam and made it very difficult for the Panthers to sustain any drives or get deep in Broncos territory at the end of the game.

These guys have got to be suspended. The Broncos were allowed to violate rules and purposely try to eliminate Cam from the game. The NFL has got to be appalled after reviewing this tape and if Roger Goodell doesnt assess a bevy of fines, and a suspension or two, then the NFL loses all credibility in my book.

They battered that man and he sucked it up, never complained and almost led his team back to victory. The guy didnt even undergo concussion protocol. Were NFL big wigs and the referees and the Carolina coaches so caught up in the ratings and the moment that they just would allow their MVP to be abused in this manner ? 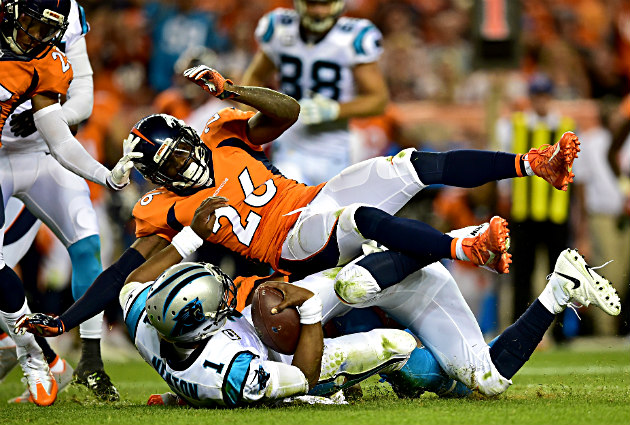 If I’m Panthers head coach Ron Rivera, after the first hit I’m causing a stink so big they would have to fumigate the place before another play could be run. He did nothing. Or at least it appears that he didn’t mention it. Why not?

Rivera said Newton absorbed “a couple shots” but would wait until he saw the tape before discussing them more. A couple of Cam’s teammates did speak up, saying the MVP needs to be protected “like a quarterback.”

Newton’s no running QB. He came out the shoot throwing for 4,000 yards. That shouldn’t even be a question. It was obviously above and beyond the abuse quarterbacks are allowed to take these days according to new NFL rules and a changing culture.

So let me get this straight.

Because Cam is a big, bad brother, it’s 1940’s rules football when he’s playing? If so, we might as well get the CTE lawsuit ready now for when Cam retires if NFL defenses can take liberties of this magnitude with him.

(Von Miller gently lays Tom Brady down for a sack)

You think the NFL would allow Peyton Manning or Tom Brady to be subjected to such violent and aggressive rule skating? In addition to these vicious hits to the head, which is a HUGE no-no in the NFL, especially when it comes to quarterbacks, Newton was hit after the play with arms, elbows and everything else, across the head area and Im sitting there saying, This ain’t right.

Showing a class and support of the NFL that is unique to Cam Newton, the battered QB refused to blame the officials or say that the hits were dirty. No matter what, this guy wont make excuses and his ego wont allow him to let Denver think they got in his head, even though they maliciously tried, time and time again.