With a berth in Super Bowl 50 on the line yesterday, Cam Newton added his name to the list of the greatest individual performances in NFL Conference Championship game history. In case you were wondering, those performances belonged to –

In NY’s dominant 41-0 victory of a Minnesota Vikings squad that featured Chris Carter and Randy Moss, Ike Hilliard proved to be the best receiver on the field that day. The Giants receiver caught 10 passes for 155 yards and two touchdowns. The best individual game by a Giants QB in the conference title game does not belong to Phil Simms or Eli Manning, but the man who was throwing the ball to Hilliard that day, Kerry Collins. He completed 28 of his 39 passes for 381 yards and five touchdowns.

Duhe was the headliner for an exceptional performance by the Miami defense in their 14-0 victory over the New York Jets. He intercepted three passes and scored a 35-yard touchdown on one of them. The Dolphins held Jets QB Richard Todd to only 15 completions out of 37 attempts for a mere 103 passing yards.

Montana passed for 286 yards and three touchdowns in the 28-27 victory over the Dallas Cowboys. The most memorable play of the game is the one that began Montana’s legend, “The Catch” that was hauled in by Clark in the back corner of the end zone with 51 seconds in the game that propelled San Francisco to its first Super Bowl. Clark caught eight passes for 120 yards and two touchdowns.

This game is considered a forgotten classic and isn’t discussed as much as other great title games, but it should be. Riggins ran the ball 36 times for 123 yards and two touchdowns while Brown caught five passes for 137 yards and a score. The 49’ers came back from a 21-0 deficit to tie the game in the fourth quarter, but Washington prevailed.

Aikman passed for 322 yards and two touchdowns while Smith has 173 all-purpose yards and two scores in Dallas’ 30-20 win in Candlestick Park. The game is remembered by most because of Jimmy Johnson’s “How ’bout them Cowboys!” exhortation in the victorious, post-game locker room.

Smith rushed for 150 yards and three touchdowns while Irvin caught seven passes for 100 yards and two scores in Dallas’ 38-27 victory over Green Bay.  The Packers held a 27-24 lead in the fourth quarter, until Smith’s 5-yard TD run capped off a 90-yard drive and his 16-yard score, which followed a Larry Brown interception and a juggling Irvin sideline reception for a 34-yard game, sealed the deal. Lost in the sauce of the Packers loss was Antonio Freeman’s 212 all-purpose yards in the loss. 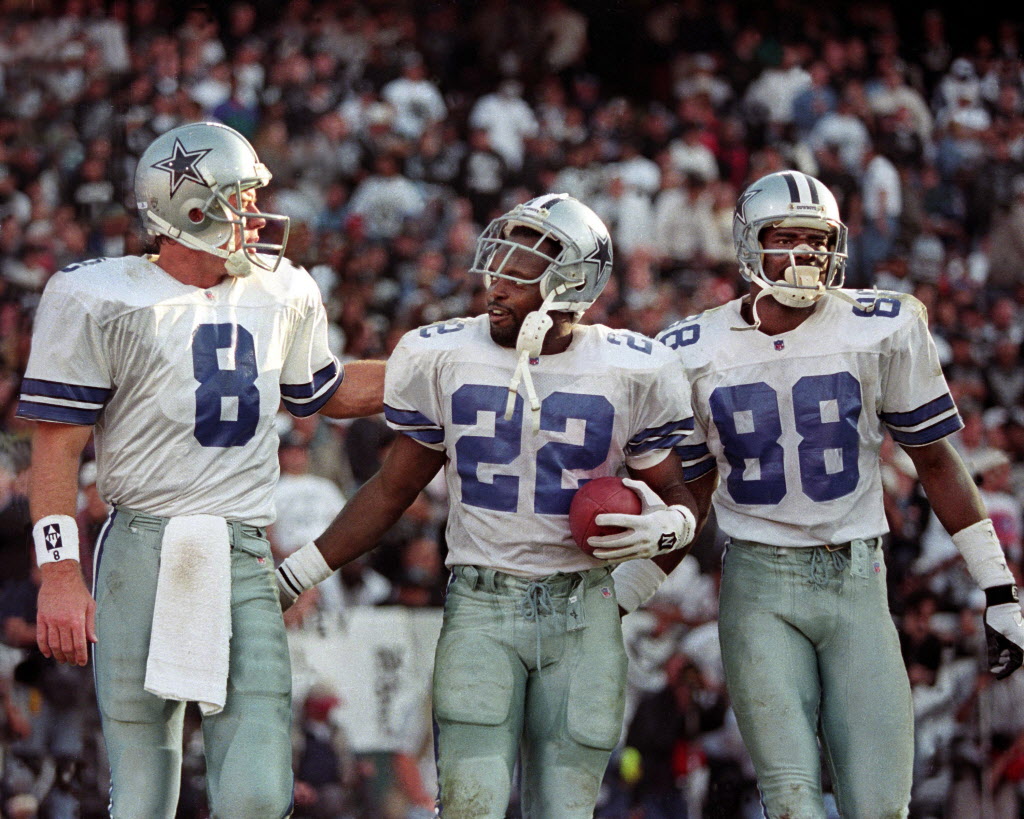 Ya’ll can slobber over Tom Brady all you want, but that coach on the New England sideline is a diabolical genius. Brady was 14-of-21 for 207 yards, including a 60-yard TD to Deion Branch, a 9-yarder to David Givens and did not throw an interception in the Patriots 41-27 victory. Branch caught four passes for 116 yards, rushed for 37 yards, and scored two touchdowns, one of which was a a 23-yard touchdown run on a reverse play, giving the Patriots a 4120 lead. But this big win, which derailed Pittsburgh QB Ben Roethlisberger’s phenomenal  year, was all due to the four turnovers that the Patriots caused, and how they made the Steelers one-dimensional by shutting down Jerome Bettis and their running game. It was Roethlisberger’s first loss as an NFL starter after a record 15-straight wins to begin his career.

Seau played perhaps the best game of his career as San Diego defeated the heavily-favored Pittsburgh Steelers, 17-13. The Chargers linebacker recorded 16 tackles, despite playing with a pinched nerve in his neck. It was the franchise’s most significant win since joining the NFL in 1970. Seau played like a man possessed and was all over the field on run and pass coverage. In addition to his 16 tackles, he also forced a fumble.

In the very last game played in Philadelphia’s Veteran’s Stadium, Tampa Bay led  2010 as the Eagles drove 73 yards to Bucs 10 yard line. Barber proceeded to intercept Donovan McNabb’s pass with 3:12 remaining and returned it 92 yards for a touchdown to propel Tampa to their first Super Bowl appearance. He also forced a McNabb fumble earlier in the game on a blitz.

In the game known as “Peyton’s Revenge”, Manning passed for 349 yards and a touchdown and led the Colts back from an 18-point secondquarter defecit, winning the game on an 80-yard drive late in the fourth quarter. In the pulsating 38-34 victory, directed an offense with his audibles at the line of scrimmage that gained 455 offensive yards and 32 first downs to earn the franchise’s first trip to the Super Bowl since 1970.

Chandler had perhaps the best game of his entire career in Atlanta’s 30-27 overtime victory against a Vikings squad that is considered one of the best teams to never win a Super Bowl. He threw for 340 yards and three touchdowns in beating the heavily-favored Vikings, who’d scored a then-NFL record 556 points sparked by the passing of Randall Cunningham, running of Robert Smith and pass catching of Chris Carter and rookie phenom Randy Moss.

Elway threw for 281 yards and three touchdowns in only 14 completions, and Jackson caught four balls for 134 yards and a score in the Broncos’ 38-33 win.

This game is synonymous with the Elway legend, as he orchestrated what is known in the popular lexicon as “The Drive.” In a little over five minutes, he led the Broncos 98 yards on a 15-play drive that tied the game against the Cleveland Browns with 37 seconds left in regulation. The Broncos proceeded to win, 23-20, on an overtime field goal. The final drive is still a source of angst to many in Cleveland.

In a game that was an instant classic, Sherman thrust himself into the national consciousness as the best defensive back in the NFL while also confronting America’s ignorance on the “Thug Narrative.” His hyped interview moments after one of the most memorable game-clinching defensive plays in championship game history seemed to scare White America as much as he scared opposing quarterbacks. Seattle’s top-ranked defense, led by the loquacious Sherman, forced three fourth-quarter turnovers.

Cam slapped the naysayers in the face with his play this season, and his majestic performance in Carolina’s 49-15 annihilation of the Arizona Cardinals in the NFC Championship was simply par for the course for how he’s played all year.

How can you count the ways of Newton’s brilliance? Let’s begin with 636 rushing yards, 3,837 passing yards, 14 straight victories en route to a 15-1 regular season record, the 35 passing touchdowns, the 52 passes of over 20 yards, the 10 passes of over 40 yards, the 10 rushing touchdowns, the Dabbin’ and the making of countless dreams come true by handing those scoring footballs to smiling, enthusiastic little kids.

Cam connected on 19 of his 28 passes for 335 yards, tossed two touchdowns and ran for two more. No matter what happens against the Denver Broncos in Super Bowl 50, the larger symbolism will be the passing of the torch to Newton, who is now the best player in the game and the new face of the NFL on the Golden Anniversary of its biggest event.