With the Heisman Trophy race between Alabamas Derrick Henry, Clemsons Deshaun Watson and Stanfords Christian McCaffrey garnering all the headlines, its easy to lose sight of some of the other great players whove had astounding seasons.

Here are The Shadow Leagues choices for who should be awarded all of the prestigious post-season hardware.

Quarterback of the Year, aka The Davey OBrien Award Deshaun Watson, Clemson

Navys Keenan Reynolds, Houstons Greg Ward Jr. and TCUs Trevone Boykin had outstanding seasons. I debated this one more than you might  think, at times opting for Oklahomas Baker Mayfield, who threw for 3,389 yards and 35 touchdowns against only five interceptions.

But in the final analysis, no signal caller had a better year than the Tigers sophomore Deshaun Watson. The leader of the countrys top-ranked team, Watson is the best dual-threat QB in America who has thrown for 3,512 yards and 30 touchdowns while also running for an additional 887 yards and 11 TDs.

Receiver of the Year, aka The Biletnikoff Award Sterling Shepard, Oklahoma

The herd is going to flock towards Baylors 5-foot-11 junior Corey Coleman, who has had an outstanding season with a national best 20 receiving touchdowns and 1,363 receiving yards on 74 catches. TCUs Josh Doctson was the front-runner until he injured his wrist. Doctson caught 79 passes for 1,327 yards and 14 touchdowns despite missing most of the Kansas game and all of the final two games against Baylor and Oklahoma.

Notre Dames Will Fuller and Ole Miss’ Laquon Treadwell deserve consideration as well, but Oklahomas Sterling Shepard is my choice for this recognition. In the biggest game of the year up to that point, in a head-to-head matchup with Coleman when the Sooners took on an undefeated Baylor squad that had spanked them two years in a row, Shepard caught 14 balls for 177 yards and two touchdowns. Overall, he caught 79 passes for 1,201 yards and 11 scores, but his value to the most balanced offense in all of college football cannot be ascertained by simply examining his numbers. This guy might be the smallest guy on the field, but he’s simply special.

Alright, alright, if you put a gun to my head Ill go with UCLAs Kaimi Fairburn for the Groza. He kicked a 60-yard field goal, did not miss an extra point attempt and connected on 87% of his field goal attempts.

Utahs Tom Hackett is an outstanding punter, but Im going with Oklahoma freshman Jordan Siebert for the Ray Guy Award. He has been a very underrated aspect to Oklahomas wonderful season, as opposing teams have combined to accumulate a grand total of seven yards (SEVEN YARDS!)  against the Sooners in the punt return game all year.

The Friends of John Mackey have already announced that Henry has won the award over Stanford’s Austin Hooper and Clemson’s Jordan Leggett. Henry is an elite blocker and pass catcher. 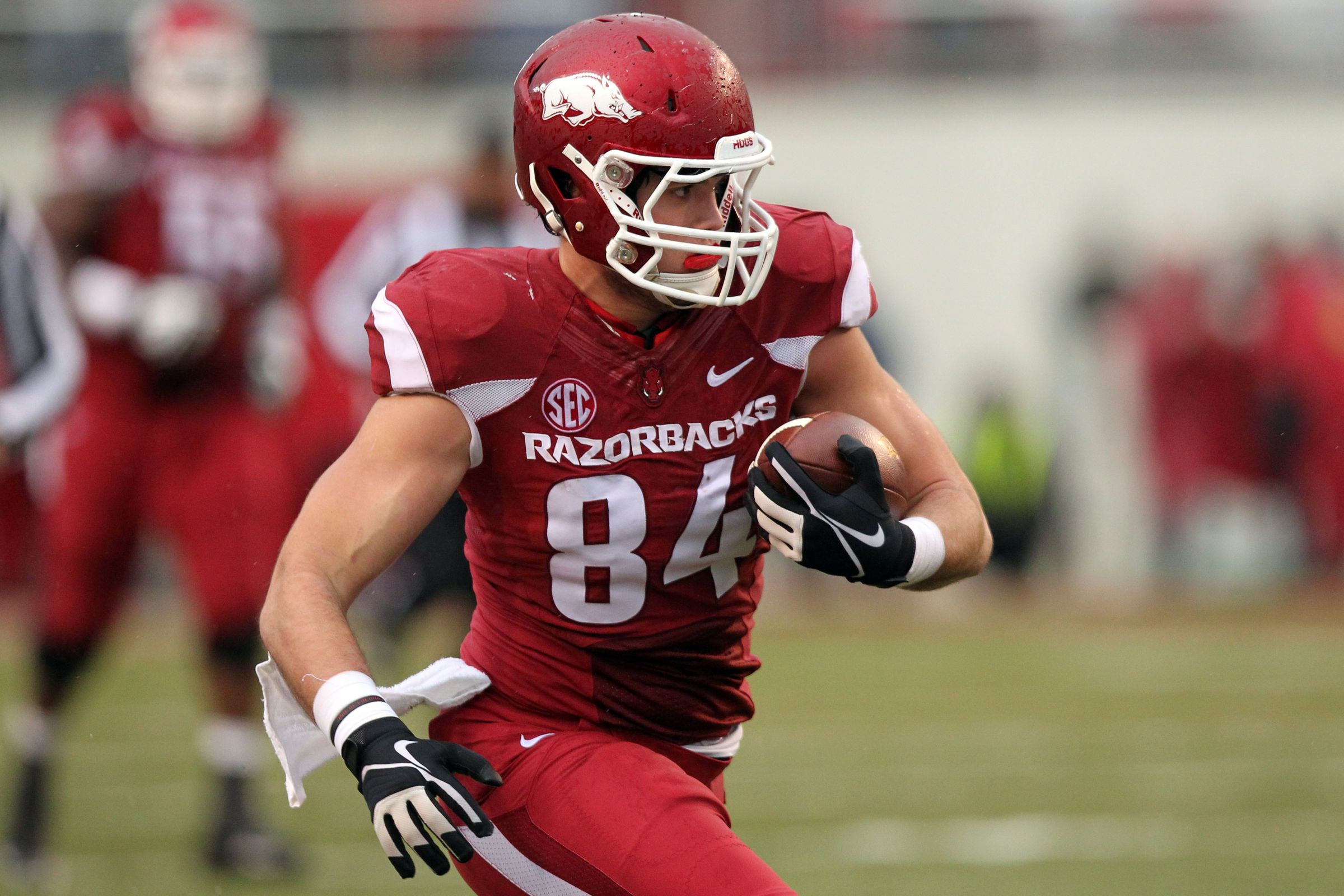 He has not allowed a sack all year and led all SEC tight ends in receptions, receiving yards and first downs. In addition, he has not dropped a single pass all year.

The Best Center, aka The Rimington Trophy – Ryan Kelly, Alabama

Kelly makes all the calls on a line that opened the holes that running back Derrick Henry ran through during his record-breaking season. He has not allowed a sack all year and has 16 knockdown blocks heading into the playoff game against Michigan State.

Lineman of the Year, aka The Outland Trophy Ronnie Stanley, Notre Dame

If Ole Miss Laremy Tunsil didnt have to sit out the first seven games of the year due to NCAA questions about his dealings with an agent, he probably would have gotten the nod here. My choice is the Fighting Irishs 6-foot-6, 315-pound junior, who was also voted as the 2015 Polynesian College Football Player of the Year. Last seasons inaugural recipient of the best Polynesian player designation went to Oregons Heisman Trophy winning quarterback Marcus Mariota.

If you watched Notre Dame run the ball this year, you witnessed the brutal brilliance of Stanleys work. Their rushing attack averaged a modern school record of 5.76 yards per carry. Runnig Back C.J. Prosise got the gaudy stats, but Stanley anchored the unit that made it happen.

Ragland quarterbacked one of the nations most ferocious defenses and led the unit with 90 tackles. The Crimson Tide has the countrys No. 1 ranked rushing defense, No. 2 ranked total defense and they rank third in scoring defense and fifth in passer efficiency rating.

Best Defensive Player, aka The Bronco Nagurski Award and The Best Lineman, aka The Lombardi Award  Joey Bosa, Ohio State

This isn’t about stats, it’s about who dominates on the defensive side of football more than anyone else.

The consensus choice as the #1 overall draft pick in the 2016 NFL Draft, Bosa is drawing comparisons to a young J.J. Watt. This guy bullies triple teams. No defender in college ball is more feared and respected than Bosa.

Best Player, aka The Maxwell Award and Running Back of the Year, aka The Doak Walker Award Derrick Henry, Alabama

His durability, incredible rushing totals in big games, and the extent to which Alabamas offense has depended on him all season because of their pedestrian passing attack has been phenomenal. All of the aforementioned qualities were on display in his incredible performance against Auburn in this years Iron Bowl: 46 carries for 271 yards in a 29-13 victory that punched his teams ticket to the SEC Championship. With his team clinging to a 19-13 lead, he carried the ball on a mind-boggling 19 out of Bamas 21 fouth quarter snaps. Out of the 76 total offensive plays that offensive coordinator Lane Kiffin called, over 60% wound up in Henrys hands.

A week later, he carried Alabama on his back against a rugged Florida run-defense, with another 44 carries for 189 yards, to propel his squad into the College Football Playoffs as the overall #2 seed.

He broke one of the most hallowed records in all of college football, the great Herschel Walkers SEC mark for rushing yards in a single season by rushing for 1,986 and counting. It was a record, in a conference that also boasts all-time greats like Bo Jackson and Emmitt Smith, that had stood for 34 years. And what makes it even more remarkable is that Henry crossed the threshold that was set by the Gold Standard of college running backs on 39 fewer carries than Walker needed back when he established it in 1981.

Defensive Back of the Year, aka The Thorpe Award Vernon Hargreaves III, Florida

Michigans Jourdan Lewis, Dukes Jeremy Cash and Iowas Desmond King played some exceptional ball on the island of the defensive backfield this year. But none of them is as special as Hargreaves, who has started and been one of the nations best since he stepped foot on campus three years ago.

This years crop of DBs is excellent, but Heargraves stands head and shoulders above all others. His ability to shift gears and change directions is wicked! He might not be a 6-footer, but his ball skills and ability to be disruptive in the air are unique. He might start out backpedaling and defending, but once the pass is airborne, he becomes a gifted wide receiver who also happens to be a shut-down corner.

The Player Who Has Had the Best Season, The Most Popular Player on the Best Team, The Player Who Has the Most Eye-Popping Highlights on a Good Team and The Award With No True Definition on its Qualifications, aka The Heisman Trophy Christian McCaffrey, Stanford

No player in the country has been more versatile. Hes scored touchdowns running, receiving and passing this year. In addition to his duties on offense, hes also the Cardinals punt and kick returner. The incomparable Barry Sanders held the record for all-purpose yards in a season, 3,250, which he set during his Heisman Trophy winning season at Oklahoma State in 1988. McCaffrey, after putting up an insane 461 yards against USC in the Pac-12 title game, now owns the record with 3,496.

Barry Sanders is the greatest player in the history of college football. If you dont believe me, just take a look back at his insane 1988 season. Anybody who breaks his record of all-purpose yardage in a season deserves to win the Heisman. Its really that simple.