At this weekends NBA All-Star festivities in Toronto, the Eastern and Western Conference squads, respectively, are supposed to have 12 players. But on Kobe Bryant’s last go-around, the west boasts an additional All-Star: James Hardens beard.

Over the last few years, “The Beard” has taken on a life of its own. No longer stepping out in public with hoodies zipped up to his chin, Harden has skillfully embraced the phenomenon of his lush and robust beard, creating an enigmatic aura that attracts fans from across the globe who would otherwise have no interest in basketball.

People who dont know a three-pointer from a three-second violation will immediately refer to him by a moniker that grows daily: “The Beard.”

The NBAs first ever Players Association MVP, Harden’s game and fame have become a global export, so much so that adidas enticed him to leave his sponsorship deal with basketball behemoth Nike to the tune of $200 million over 13 years.

He also has lucrative sponsorship deals with Foot Locker, New Era and others. That type of money is not simply given to a one-dimensional baller, no matter how gifted. Its bestowed on someone with an All-Star game that also has cross-cultural currency, something that Harden possesses in abundance.

His elevated status in the public consciousness is the latest crescendo for the wondrous marvel of facial hair. It will not be the last. And it is far from the first.

It was 2011, in the midst of a 45-minute show, when Rick Ross, drenched in sweat, pulled off his t-shirt and threw it into the crowd. A young lady caught and lifted it, opened her mouth wide and then wrung it dry of its liquid, pouring his sweat into her mouth.

Three decades prior to Rick Rosss magic funk-sweat potion, the 1978 Ladies Only tour saw Teddy Pendergrass capitalizing on his sex symbol status. Linda Berry, 67, went to several of the shows engineered specifically for the ladies where panties were routinely thrown on stage, often missing their intended target and landing on people in the front rows.

It was everything about him, his luscious lips, his height, his body, his legs, Berry said about his appeal. It was also his beard.

Teddys sex-symbol status could be attributed to his beard, his raspy, low tenor voice, his height, his keen features, or his aloof but commanding presence.

But its much harder to distinguish the kind of rabid appeal that would make someone drink Rick Rosss sweat. Theres actually nothing that can justify that, but this much is known: both Ross and Pendergrass are known for their masculine beards.

And they both represent how the evolution of the beard as a style device has changed with the culture from the 70s – where a masculine but sensual style of R&B was king and in the words of Slick Rick, where people wore pajamas and lived life slow – to the 90s and 2000s, where a hard-edged, fast-paced lifestyle fatally altered the scenic route of the courting ritual toward Method Mans Ice Cream school of getting all up in some guts.

In the last few years, style has seen a resurgence of the beard; sometimes overgrown like Philly rap star Freewayreferred to as a Philly beard or a Sunni named for Sunni Muslimssometimes a clean shadow beard like Omari Hardwick from the hit Starz show, Power or a goatee like New Jack Swing creator Teddy Riley.

(Freeway Has His Own Brand Of Natural Beard Cream)

But former Pittsburgh Steeler defensive end Brett Keisels is on top of the heap of the redheads with a beard that looks like he got a wet set and a deep conditioning from the Dominican hair salon.

Former Baltimore Orioles first baseman Eddie Murray and UFC fighter Kimbo Slice have mastered the connection beard: linking to mustaches and in Kimbos case, what looks like a coupling with his scalp.

Drew Goodens facial dreads and Antonio Grays geometric pinball-machine-beards win awards in categories that have yet to be created.

Even OJ Simpson had a beard, a fake one that police found on the floor of his Bronco!

I think that beards are the ultimate sign of masculinity, says Franzette Browne, a NYC native and self-described beard fan. When we were coming up in the 70s, men with beards were the epitome of strength, masculinity and manliness. The lumberjack man always had a beard. I used to love when my dad would kiss my cheek and I would feel his facial hair. It always brings sweet memories.

There are religious connections to beards in Hinduism, Islam and Judaism. In Islam, devout Muslims allow their beards to grow as a way to pay respect to the prophet Muhammad and a sign that youre trying to walk the righteous path that he once walked. Malcolm X, who looks eerily similar to a maturing Steph Curry, wore a goatee after he left the clean-shaven Nation of Islam and became an orthodox Muslim and African nationalist.

There are thousands of Instagram pages devoted to the sexiness of beards or even how to employ your beard to grow Instagram followers.

Its in the news often and some of them have even taken on a life of their own, with their own followings in the tens of thousands, if not more.

Beards and mustaches deal with masculinity, says scholar Todd Steven Burroughs. When the money people on the set of the movie Shaft told director Gordon Parks that Richard Roundtree would have to shave off his beard, Parks said, Hell no! Because he knew what that meant. He wasnt trying to take away his masculinity.

On the ’70s athletic landscape at the time, when Black urban culture exploded into the larger national consciousness due to the Blaxploitation films and the weekly televised images and sagas of the Sanford, Jefferson and Evans families, there was no greater arbiter of cool than New York Knicks All-Star guard Walt Clyde Frazier. On and off the court, Clyde walked with a bop and an aura of unflappable bravado. Frazier, at the time, was the personification of fashionable chicness and sartorial splendor. He was, and probably still is, quite possibly the coolest individual walking the earth.

But we can go even further back, before Clydes swishing and dishing, and prior to John Shafts black leather style and sideburn-manliness made an imprint on the public consciousness.

John Stauffer, co-author of Picturing Frederick Douglass, says that Douglass was the most photographed person in the 19th century. In photos, Douglass rarely smiled and refuted the notion of blacks as happy slaves and servants.

A marker of Douglasss continued evolution was his facial hair, said Stauffer on C-Span. While 19th century men experimented with hirsute faces, few did so as frequently as Douglass.”

As Douglass evolved from revolutionary freedom fighter and steely visionary to wise prophet and elder statesman, his facial hair did as well.

He tracked and often led the prevailing fashion, said Stauffer. In the 1840s, a clean-shaven look was most prevalent and Douglass was clean shaven. He grew chin whiskers in the 1850s and that evolved. By the mid-1850’s he became a trendsetter with a full beard with side hairs that covered his ears, a look that wasnt popular until the end of the decade.

Erick E Fleming, a barber at the Perfect Gentlemans shop adjacent to Lexington Market in downtown Baltimore, has a full beard like rapper Freeway that he maintains by shampooing, combing and conditioning regularly. He says the new resurgence in beards started around the time he started cutting hair in 2000.

When I first started, beards werent that big, said Fleming. Older men had them and younger dudes had the thin line, goatee and chin straps. That was like the way Freeway wears his beard. Rick Ross came on the scene and he wore it full. Back in the day it was Isaac Hayes and Teddy Pendergrass. Gerald Levert always kept a mean beard. Anthony Hamilton wears it thick but doesnt get it cleaned up. He keeps that down-south-cruddy-rough look.

Fleming says some men opt to dye their salt-n-pepa beards with Bigen hair dye. Sometimes you dont want to look older than you are. You dont want a 50-year-old looking at you, like Hey, baby!

A few men have taken it a step further and completely draw in their beards or hair line with dye.

Many women have a fetish for the salt-n-pepa look, said Browne. A lot of men think they have to dye it black, but they dont. I really like the full shadow beard. Its a classic man. It never goes out of style.”

“He may be an average guy, but if he has a nice beard thats well-managed, well-maintained and not scraggly, that works,” continued Browne. “I dont like the Rick Ross look too much, I call it the Bin Laden. Black Thought from The Roots has a nice beard, as does Omari [Hardwick] from Power. Idris Elba, his beard is love.

I couldnt wait to get a salt-n-pepa beard, remembers writer Michael Gonzales. Ed Bradley was the motherf—in man. He was the black James Bond as far as I was concerned. Its distinguished. Its intellectual. It has a certain flair to it. It wasnt like, Oh, damn now Im getting older. It was like, Oh! Now I got some Ed Bradley shit! 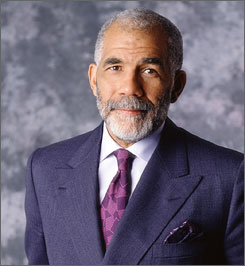 Gonzales remembers when having a beard wasnt necessarily a good thing, in the same way that wearing glasses wasnt considered sexy. Different vocations viewed beards differently. Writers who didnt need to go into an office could sport a scruffy one. Others looked at wearing a beard as a form of freedom.

A lot of white guys have been rocking the beard for years, like bikers, said Fleming. For them it was more like, ‘Im living free. Im not bound by the office or the workplace.’ Now its okay to have a beard in the work place. Its part of your style, your swagger. Its a statement. Its a man thing.

Clyde Frazier and Isaac Hayes were cool, remembers Gonzales. Barry Gibb had the coolest effing beard. The comic book character, The Green Arrow, had a green funky goatee. Having a beard was synonymous with being intellectual like Sigmund Freud. One of my favorite science fiction writers, Samuel R. Delany, had an incredible beard. Its black and grey and its a spectacle.

Even Drake, who has been accused in the past of being as soft as baby thighs, has crawled onto the beard bandwagon. And his young fans have responded, some asking to fertilize his face.

At the NBAs marquee mid-season event, James Harden is not the only one rocking the style. Sacramento All-Star DeMarcus Cousins, Detroit manchild Andre Drummond, Clippers point guard Chris Paul, Wizards blur John Wall, Timberwolves rising star Karl-Anthony Towns and even Hall of Fame finalist and retired legend Shaquille ONeal, whose got some Suge Knight flavors blossoming on his chin and neck, are just a small sample from the league that might soon be known as the Nice Beard Association.

Some of the latest various incarnations of the beard has its roots in black masculine style, from the Fedora hats of the aforementioned Clyde Frazier to the baggy jeans of the hip-hop generation. As men continue to redefine what masculinity looks like, the styles will continue to evolve. For now, its seems to be driven by that irresistible force: what the ladies like.

Ladies have been promoting this trend, says Fleming, with a sly smile and his Rick Ross-styled beard glistening. It has its perks.