Jim Boeheim has been King of the elite Syracuse University mens basketball squad for 40 years. Since taking over in the ’76-’77 season, Boeheim has been the driving force and mastermind of one of college basketballs all-time distinguished hoops programs.

Boeheim has sent a slew of ballers to the NBA, most notably Carmelo Anthony, who helped lead Syracuse to its only NCAA title in 2003.

Boeheim’s a college hoops coaching icon and has continued to thrive at Syracuse, despite dodging and ducking NCAA investigations, accusations of improper benefits, academic misconduct and being labeled as a coach that is as loose with the reigns as any successful sideline stalker in NCAA history.

Former Cuse star and NBA player John Wallace once told me that Boeheim never stressed his players about going to class, or hanging out late and fully immersing themselves in the universitys notorious party atmosphere. As long as you made it to practice and showed up for the games, you were good, Wallace said.

Boeheims hands-off approach benefited him in recruiting and in developing a reputation as a players coach whose wide open system allowed ballers to develop an NBA game. Before dipping to the ACC after the 2013 season, Boeheim had won nine Big East regular season championships, five Big East Tournament championships, made four Final Four trips and three appearances in the national title game.

After suffering through an uncharacteristic 18-13 season and a suspension from the 15-team ACC tourney in 2015, Boeheim AKA The Rubberband Man, has rebounded this season to advance to another Sweet 16, as No. 10 seed Syracuse pulled off an upset of No. 7 seed Dayton in the tournament’s opening round. They proceeded to blow out the Cinderella squad that destroyed everyone’s bracket with a stunning win over Michigan State, Middle Tennessee State, by a score of 75-50 on Sunday. 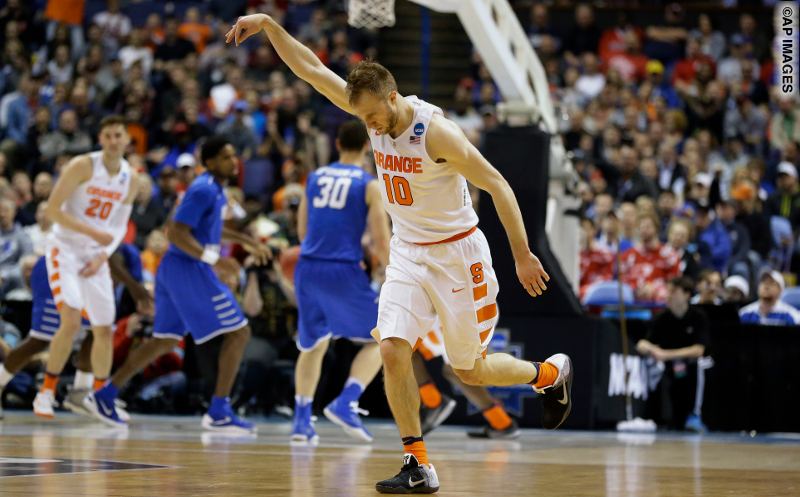 After holding their breath on the bubble a week ago, Syracuse is fully in the title mix and will play No. 11 seed Gonzaga on Friday in Chicago with a chance to advance to the Elite Eight. The Orange became the sixth ACC school to advance to the Sweet 16, a record number for a single conference since the field expanded to 64 teams in 1985. The league went 12-1 in the opening two rounds with only Pittsburgh losing.

NCAA title-hunting is old hat for Boeheim, whose Syracuse program was one of the flagship universities of the old Big East and helped shape the culture of college basketball in the ’80s, ’90s and 2000’s. However, the 72-year-old Boeheim, who says he will retire in March of 2018, has to feel somewhat vindicated and fulfilled with this unexpected trip to the coveted Sweet 16.

Boeheims cat and mouse game with the NCAA had been going on for years and finally last season, on March 6, 2015, the NCAA suspended him for the first nine ACC games of the 201516 season and took away 12 scholarships over a four-year period, as a result of a multi-year investigation into the university’s athletic programs. The ruling also constitutes the second-most wins ever permanently vacated by one program, behind the 113 wins vacated by Michigan during the Fab Five Era.

For years, Boeheim showed us why he was a master at elevating the Syracuse program to more colossal heights each season. His poker face is notorious as is his occasional outburst. In the 2012-13 season, when Syracuse was making another run to the Final Four, the media and NCAA was turning up the heat on his handling of the athletics program.

Same story they had last year at this time, Boeheim said. I guess thats annual. I guess next year well get it again.

Boeheim is as old school as Shell Top Adidas and hes undoubtedly had to adjust his recruiting techniques and coaching style to advance with the changing dynamics and academic demands of NCAA D-I basketball over the years.

Hes never wavered in his insistence that he does things the right way, despite the fact that the university even acknowledged that the college sports governing body had inquired into old allegations that players were allowed to practice and play despite being in violation of the schools drug policy. Every year, around tournament time, we start hearing rumblings about Boeheim’s program, but the results of any investigation have been no more than the equivalent of a slap on the wrist.

All things considered, last years sanctions were the equivalent of Boeheim and Syracuse stubbing their toe. It certainly didnt hurt recruiting and did very little to damage Boeheims legacy in college basketball. Hes built relationships that are unshakeable, hes represented the country as a coach in international play and hes been a part of every major decision to shape the sport in the last half century that involved the vote, opinion and input of the games most respected coaches.

This time last season, people were wondering what would become of the mighty Syracuse program, who won less than 20 games for just the second time since Boeheim assumed the helm back when Isaac Hayes was still popping.

Just as he bounced back from missing the 93 NCAA Tournament for recruiting violations, beat cancer in 2001 and rebounded from two tough NCAA finals losses — especially that 1987 loss to Bobby Knight, Indiana and Keith Smarts corner jump shot — Boeheim has reminded us that he is a machine as far as producing Ws goes and it didnt take but one year to get back on track.

Most coaches wouldn’t have been able to survive the first scandal. In situations such as these, somebody has to be the scapegoat and it’s usually the coach. However, a coach like Jimmy B who has compiled 37 20-win seasons in 40 years at the university — good for most on the all-time list — plays by a different set of rules.

Hes earned his right to go out on his own terms and we are seeing in this NCAA tournament that Boeheims terms usually include finding a way to become a major player in the National Championship discussion.