Director Tina Mabrys multiple award-winning film Mississippi Damned might be one of the most heart-wrenching looks into generational poverty and abuse within a Black household that this writer has ever seen and has been applauded vigorously by both the mainstream and Black press for overall quality. Even though it was originally completed back in 2008, I had not been fortunate enough to give it a glimpse up until a few days ago when the African-American Film Festival Releasing Movement (recently changed to ARRAY) reached out and advised me of the opportunity to speak with this talented individual regarding Mississippi Damned being vetted by Netflix-a venue that seems more concerned with high-quality works than any other viewing platform available to consumers.

Shot on location in Ahoski, North Carolina in May 2008, Mississippi Damned stars Tessa Thompson, Malcolm Goodwin, Jossie Thacker, Chasity Keshal Hammite, Kylee Russell, D.B. Woodside and many other great performers, as well as top-flight technical support from cinematographer Bradford Young prior to his critically-acclaimed work on Selma, Middle of Nowhere and A Most Violent Year).

I asked Tina how such she came to head a film filled with untapped talent on her first feature film.

As any director knows, half our job is casting the right person. It makes things so much easier for us.  It lessened the pressure on me as a first time director, and we jelled on a creative sense and also on a personal level. We were like family coming together to do something rather than just a group of people doing a job and it was a corporate thing.  I think that is what made the film come out to be so rich.  It was all of that collaborative energy that kind of percolated there. We were all so young at that time.

The moment Tessa Thompson walked into the audition I knew she was the one. There was no doubt about it. Maybe it was just the way she carried herself as that character when she came in. We talked afterwards and it was like Tessas really good people.  What are the chances that you see several actresses and you know theyre the one as soon as they open their mouths. Tessa has always had those chops. So, it never surprises me to continue seeing her excel and grow on screen. Shes done Selma, Dear White People and I cant wait to see Creed when it comes out to see what Tessas bringing to the table. It such a good thing for me as a director to be able to work with an actress that has the type of talent as Tessa, but I think we both fed off each other very well.

She came into our production two weeks into it and we were already chugging along.  So, she had to jump right in. And because Mississippi Damned is not a comedy its really tough for an actress to come in and do all this emotional stuff. She came in on two very hard scenes that she had to do on her first day, and she handled it and got into the flow immediately like a champ.  We were like How can we make sure this a good film? How can we all be there for one another? And it went beyond just action and cut. Thats something I really appreciated about her and the rest of the cast and crew.

In addition to Thompson, cinematographer Bradford Young has been on fire as of late with his work on Selma, A Most Violent Year and Ava Duvernays Middle of Nowhere. However, as was the case with Tessa, you could clearly see Youngs talents were considerable even seven years ago.

I remember us having the first conversation about the script and talking about family, and lighting scens. He said I remember my Grandmomma used to have the pilot light on and you would always see that light sort of in the background in the kitchen. And I was like Yeah, I remember that from Grannys house. Immediately, I knew that this was someone who was going to get it.   It wasnt about what kind of technological gadget I could bring on. It was whatevers organic to what were telling.  He knows story and he understands character. He is completely open, connected and in tune when youre filming. Hes just so easy to work with.  Ive been so excited to see his career just blossom.

The tagline for Mississippi Damned is Wanting to escape was the easy part. But even those ominous words do the film very little justice. To be frank, this is a very heavy, emotionally gut-wrenching offering. However, to properly explain the lives and motivations of humans, artists must sometimes craft work that causes introspection. Tina says this film is based on a true story and, even as she was writing it, her real life circumstances prompted script changes and adjustments.

The story is based on my life and my familys life. We just never had the vehicle to tell this story until I got to that point.  Once I got out of graduate school at S.C. (University of Southern California), I came out as a writer/director, and no one was out there handing me a feature right out of film school. So, I just started writing everything down. Like, little scenes of things that happened in our lives, and I wasnt quite sure how it would come together as a script. How do you put a lifetime into a finite amount of time? So, I just started writing little by little, and my producing partner Morgan R. Stiff, who is also my wife, she was reading everything I was putting out.  She was like Dont be afraid to do it. Lets go ahead and finishing it. Once I got to down to writing it was about powering through it and reliving a lot of harsh things and a lot of happy moments as well.

But I had to take a hiatus six months into this. My mother got cancer, and it was right around page 60 in the script, where I had just given her character cancer.  I did not know that was something was going to happen. I just stopped. I was extremely superstitious that I had just willed that on her. I told my Mom Every time I start a script with a character that is somewhat related to you I never finish that particular story. Shes always had health problems and I was afraid that if I finish it that character might die.  It was probably a month before she passed and she said Will you promise me that youll just finish this and write it exactly how it was supposed to go. Promise me that. 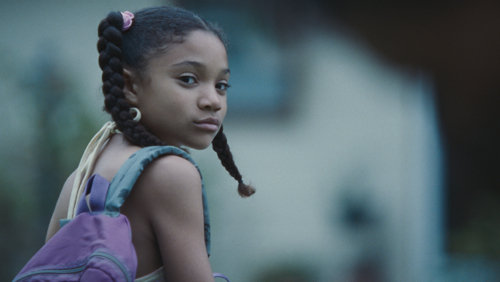 And I couldnt touch it for about six months after she died.  I cried like a baby as soon as I got back to it, but it was exactly what I needed to get through the grieving process. I went ahead and finished the film. I did that for her. I wouldnt to finish it because I didnt want to let her down. Its something thats so personal, and youre exposing yourself in such a way that, as a writer, is really vulnerable. But especially when its your story, and you want people to understand why these characters are in the position theyre in without judging them. It was really tough. But, I felt thats what was needed. You have to do that with cinema. Thats the point. Its supposed to last with someone. Its supposed to help change someones mind, open minds, open hearts, and give people something they can connect to and to hold on to. Because thats what cinema did for me.

Mississippi Damned is now available on Netflix for your consumption.  Also, check out her work as a writer on Itty Bitty Titty Committee and the short Brooklyns Bridge to Jordan.