It’s been almost 30 years since one of the most infamous and anticipated games in college football history. Anyone who followed the sport since the late ’80s, along with fans of the ESPN 30-for-30 series, knows that the Notre Dame vs Miami football rivalry, which resumes this weekend with national championship implications once again for the first time in quite a while, reached its crescendo surrounding the 1988 game, which colloquially is simply known as Catholics vs Convicts.

Back then, No. 1 Miami was considered the brash bad boys of college football. They were riding a remarkable 36-game regular season winning streak, and had just come off of a year where they won the national championship by defeating Barry Switzer’s Oklahoma Sooners, led by perhaps the greatest option quarterback ever in the incomparable Jamelle Holieway, 20-14 in the Orange Bowl.

Notre Dame was undefeated as well, walking into that mid-October game against the Hurricanes with a 5-0 record and No.4 national ranking. Both programs were led by iconic coaches – Miami’s Jimmy Johnson and the Fighting Irish’s Lou Holtz.

Notre Dame won that game 31-30, and went on to capture the national title that season after beating West Virginia, who was led by the remarkable and unforgettable quarterback play of Major Harris, 34-21 in the Fiesta Bowl.

Most people will tell you that the ’88 contest between the Fighting Irish and the Hurricanes was one of college football’s great games, and Notre Dame fans remain adamant that it’s among the greatest regular season victories in program history.

But what stands out all these years later is the racial divide in how those teams were portrayed. The Catholics vs Convicts moniker, which was birthed as a t-shirt slogan prior to the game in South Bend by two Notre Dame students that the national media delightfully picked up on and magnified, was apparent in its coding.

The Fighting Irish were portrayed as the white, good, thoughtful, wholesome, religious boys that lived piously off the field, a piece of the fabric of all that was right. The Hurricanes were the black thugs and gun-wielding crack dealers who were terrorizing America’s urban streets in the Reagan Era, certain to be headed toward a life of criminality and prison once the charade of their student-athlete status expired.

It was yet the latest example of how race has been used throughout history – from Jack Johnson vs Jim Jeffries to Larry Holmes vs Gerry Cooney, and on through today with Floyd Mayweather vs Conor McGregor in the boxing ring – to sow racial angst and animus within the framework of defining good and evil within the sporting arena. 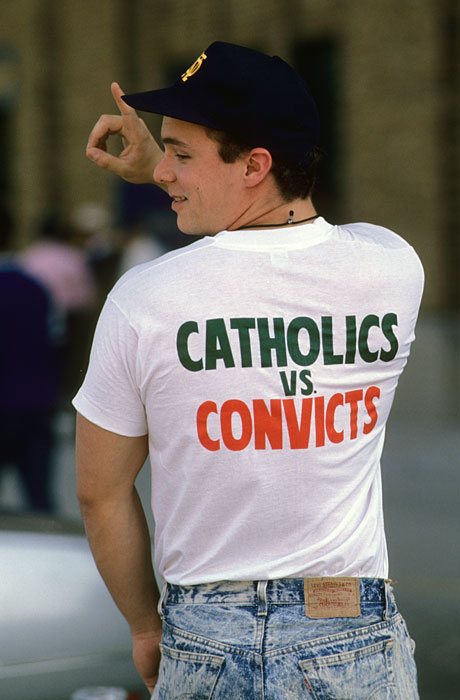 The underlying racist tenets of physical prowess vs intellectual superiority were laced throughout. America can’t seem to help itself with this flawed, lazy approach even today.

Donald Trump is the leading voice in the latest manifestation of this foolishness with his labeling of protesting NFL players as “Sons of Bitches”, as opposed to men that demand an American reconciliation of its values, racism, false promises and societal inequities.

People bought into that Catholics vs Convicts nonsense – hook, line and sinker. And don’t tell me that it was a simple way to hype the game. Because most people, other than Miami fans, became emotionally invested in seeing good triumph over evil, with the Fighting Irish and the Hurricanes representing both ends of that respective spectrum. Never mind that some of the greatest players in Miami history like Jim Kelly, Bernie Kosar, Vinny Testaverde and Steve Walsh were all Catholic.

I’m looking forward to this weekend’s game and the renewal of the rivalry when No.3 Notre Dame plays the No. 7 Hurricanes. Both teams are in the mix for a coveted playoff birth, harboring realistic national championship implications. The football part of the equation should be great.

But you know the rest, as the lingering beliefs and stereotypes that  have been regenerated with swelling fervor in the midst of Trump’s culture war will inevitably come into play.

It’s been almost 30 years since Catholics vs Convicts, and a lot hasn’t changed. Most people, sadly, will still ignorantly see this matchup as being one of good vs evil. And all these years later, that’s even more shameful than it was back then.