We saw it, as did many others, but were content to lay in the cut like Neosporin while psychologically exploring the myriad ways by which NFL prognosticators, scouts and sports analysts attempted to besmirch the name of one Cameron Jerrell Newton.

From the very moment it was announced that Cam would be entering the NFL after leading Auburn to it’s second national championship in 2010, the polarizing QB drew the ire of just about any football “expert” with an outlet upon which to express his beliefs. However, at the end of the day, those on the outside looking in are just making stuff up. Scouts and coaches were in a unique position to potentially do damage to Newton’s career and didn’t hesitate to try and derail his rise to greatness before he played one down.

Pro scout Nolan Nawrocki, 2011: “Very disingenuoushas a fake smile, comes off as very scripted and has a selfish, me-first makeup. Always knows where the cameras are and plays to them. Has an enormous ego with a sense of entitlement that continually invites trouble and makes him believe he is above the lawdoes not command respect from teammates and always will struggle to win a locker room. Only a one-year producer. Lacks accountability, focus and trustworthinessis not punctual, seeks shortcuts and sets a bad example. Immature and has had issues with authority. Not dependable.”

Nawrocki wasn’t alone in his assessment, either.  For clarity’s sake, this was right after Cam had led the Auburn Tigers to a ch’ip and won the Heisman Trophy in doing so. The criticism only got worse over time. There were numerous comments from so-called insiders that seemed to be making things up about Cam as they went along.

Very personal, very malicious, and, with few exceptions, most of his harshest detractors also happened to be white.

People even tried to say Cam was the moral antithesis to choir boy Tim Tebow, and some even stated Newton wouldn’t be as good a pro prospect as Tebow.  It sounds crazy now, but it was plenty crazy to say back in 2011, too. But there were plenty “respected” analysts who were saying it. 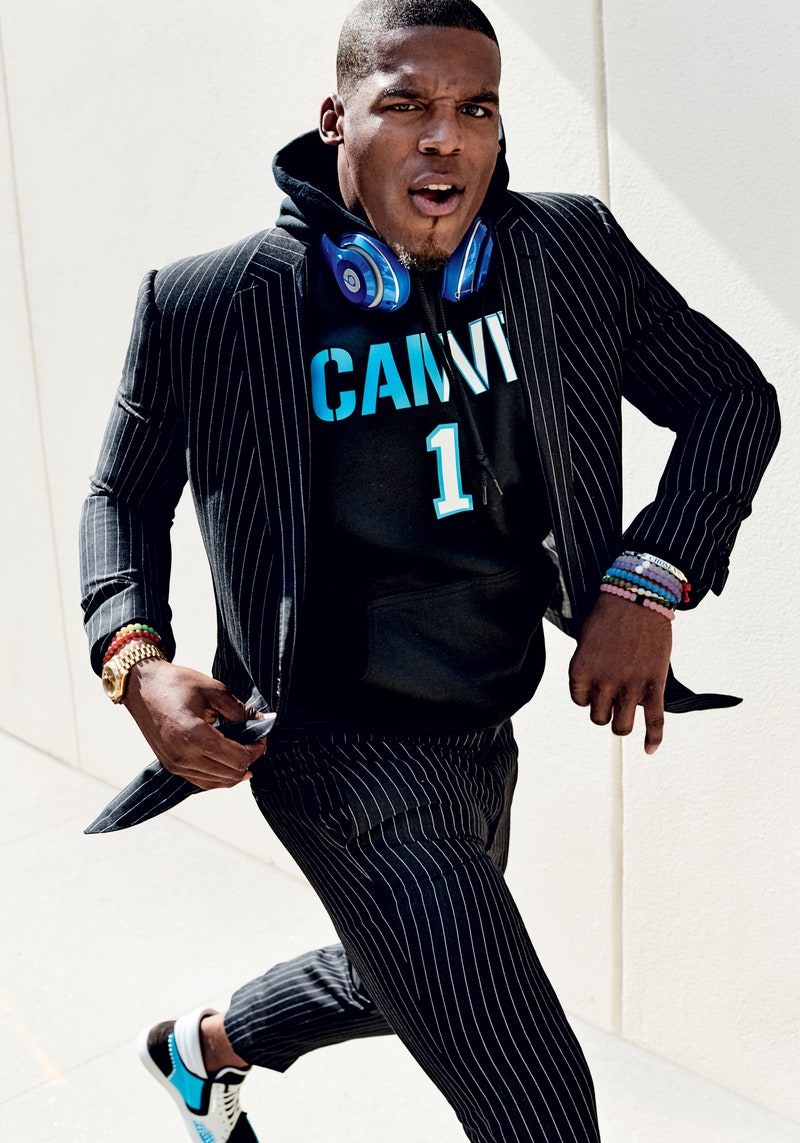 Cam was accused of being a sulker, a bad leader, a poor role model, and just about everything but a child of God. Despite getting in some trouble as an 18-year-old freshman at Florida, Cam hasn’t had a single run-in with law enforcement or suffered any serious societal slip up since he came into the NFL. But that hasn’t stopped folks mentioning his name in disdain whenever they get the chance.

In January, just prior to the Super Bowl, Cam spoke about his station as a Black quarterback in the National Football League in an interview with the Charlotte Observer.

I’m an African-American quarterback that may scare a lot of people because they haven’t seen nothing that they can compare me to,” Cam proclaimed.

That quote seemed to set the nation ablaze as if it were spoken by a world leader and not a professional athlete whose sole job is to entertain us. Black people were throwing Cam Newton parties, White people were losing their minds. In this maelstrom of controversy, Newton “clarified” his statement just weeks later.

I dont even want to touch on the topic of black quarterback, Newton said when asked about his legacy in the shadow of black quarterbacks Warren Moon and Randall Cunningham, because I think this game is bigger than black, white or even green. So I think we limit ourselves when we just label ourselves just black, this, that and the third.

“I wanted to bring awareness because of that, but yet I dont think I should be labeled just a black quarterback, because its bigger things in this sport that need to be accomplished.

Cam doesn’t know how he wants to approach his provocative persona. Proclaiming his place within the pantheon of Black QB greats like Randall Cunningham and admitting that race is a driving factor among his haters,  to stating that color doesn’t matter in professional football is quite a roller coaster.

Then, following his dejected post game interview after the Carolina Panthers lost to the Denver Broncos, he really caught fire from middle America. Spoiled, entitled, immature and lacking leadership were some of the least offending terms used to describe him. Many of those unmentioned insults were obviously and purposefully meant to be racist.

On Monday, GQ published an article titled Cam Newton on Everything, From Those Versace Pants to Race in America in which the versatile signal caller breaks even more hearts with the following statement when asked of his detractors;

Its not racism. Everybodys entitled to their own opinion…Ill let you be the judge. I dont look at it like that. I look at it like some people have certain beliefs, and I have my own belief, and we can agree to disagree on certain things. But this is what makes sports so amazing, that we can start a discussion around a table, in the newspaper, in the magazines, that will get peoples attention. And thats what sports does.I dont want this to be about race, because its not. Its not. Like, were beyond that as a nation. 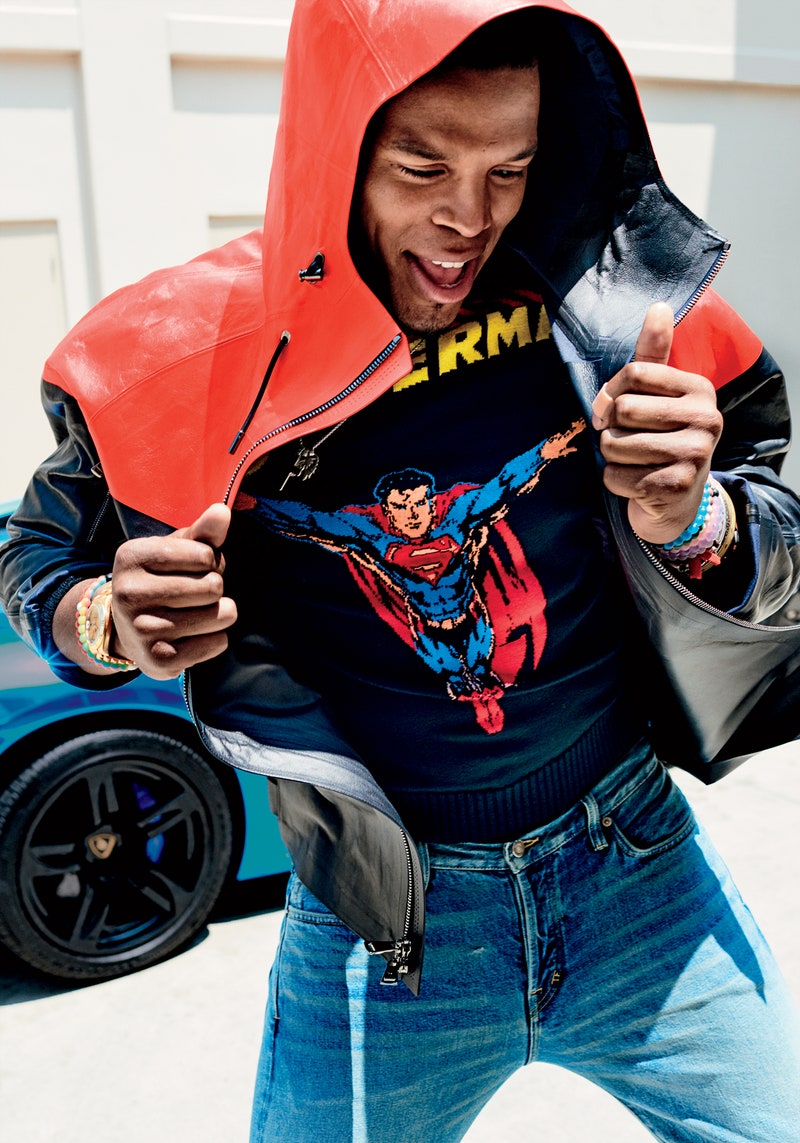 As expected, similar to when he backtracked on prior comments on race back in February, Newton was raked across the coals of social media public opinion. Indeed, it would be nice to have a physically gifted would be football Golden Boy to pick up the banner of Black nationalism, wrap himself in all its splendor, and parade around with a red, black and green emblem upon his chest as proudly as the telltale Superman “S” he is so fond of, but that would be my worldview and apparently not his.

No one likes a puppet, yet when individuals speak against what values we hold dear we suddenly consign him among the ranks of madmen?

Besides, I hardly believe Newton really believes the words that are coming out of his mouth. How could he when everything that has happened over the past three years screams to the contrary of his claim that America is beyond race? I think he is a people-pleaser who is painfully aware that simply embracing his own heritage could interfere with his “dream” life of excess and color pants.

He is a walking endorsement waiting to happen, and a man with a charitable heart. But he is no cultural icon, no driver of public opinion and not a defender of Black virtue. He’s just a football player. Apparently, that’s all he wants to be.

I’m not mad at him. Heck, I’m not even a little disappointed. What kind of leader of Black struggle would he be if he constantly bowed to public pressure and swerved to avoid controversy in the manner he has as a football player?

Activism ain’t for everybody. As much we may wish for him to be otherwise, he’s Cam Newton the football player and not Rev. Minister Cam Newton X. And it’s all right, y’all. It’s all right.