The distance between Chapell Hill and Durham couldn’t seem further than it does now. Both basketball programs are ranked in the AP’s preseason top 10 next season and in the top 30 among U.S. colleges.

Duke is the private institution ranked eighth  nationally among US News’ Best Universities.

The President of the United States has played ball with UNC as a candidate, picked them to win the national championship in 2009 and attended the Carrier Classic between the Tar Heels and Michigan State, but he chose a former Duke Blue Devil to be his body man.

Academically, Duke is considered superior. Now we may know why.

The disparity between UNC and Duke University’s collegiate rankings is about to expand.

The poetic verse Kanye West laid down over interpolations from Ray Charles’ “I Got A Woman” on 2004’s Goldigger illustrates how UNC is reacting after the extent of their academic fraud was disclosed on Wednesday.

According to an independent investigation conducted by UNC, the papers, grades or degrees of thousands of students and notably, prominent student-athletes were as legitimate as the toddlers featured on Maury’s Baby Daddy DNA Test episodes.

More specifically, the rampant cheating, plagiarizing and blatant apathy for the integrity or honor code included 3,100 students and over the course of 18 years.

Between 1993 and 2011, a disproportionate amount of student-athletes were funneled into classes which essentially served the purpose of keeping student G.P.A.’s above the 2.0 minimum.

According to the report, 169 athletes out of 329 total students received a boost that pushed their G.P.A. over 2.0 for a semester.

According the Wainstain Report, athletes benefitted from artificial grades that were faker than Mrs. West’s bone structure.

Students enrolled in these fake classes wouldn’t have to show up, stay awake and in many examples, would get passing grades for plagiarized papers and/or work that didn’t meet minimum collegiate standards.

In the two years since the NCAA launched a probe into the football program's ties between sports agents offering improper benefits to players and accidentally stumbled upon academic help from tutors.

The NCAA’s sanctions were limited to a reduction in the loss of scholarships for the football program in June of 2011.

A month later, Michael McAdoo's academic fraud on a paper titled "The Evolution of Swahili Culture on the East Coast of Africa” in his Swahili class was revealed and Pandora’s Box was opened.

This seems trivial in the grand scheme, but it’s hard enough to get Americans to appreciate African-American history. It’s almost a slap in the face to find out that this specific department was chosen for the illegal academic grade laundering operation.

Soon the scandal had spread to the entire African and Afro-American studies program.

In March of this year, a Rosa Parks essay, which read like a Drunk History sketch was featured in an ESPN report.

The most remarkable part was that this paragraph earned an A-. There were hundreds, even thousands like it that were skimmed over and given passing letter grades

Dean Smith, Roy Williams, Raymond Felton, Michael Jordan, Ty Lawson and James Worthy have been integral to UNC hopes over the last three decades, but nobody did more to aid UNC athletics than Ms. Deborah Crowder, the African studies program administrator who managed this scheme.

As opposed to the majority of college sports scandals, origins of this athletic scandal didn’t hatch within the athletic department pressuring professors, but with a member of academia voluntarily looking out for athletes.

Like Walter White, Crowder began fixing grades with good intentions on her mind before things got out of hand. From Crowder’s perspective she was an academic equalizer for elite athletes unprepared for the rigors of college workloads.

"She felt the school paid too much attention to the best and the brightest and not those who felt adrift." Wainstein said of Crowder in a news conference.

Eventually, her misguided philanthropy was aided by colleagues within the academic department.

One of the professors who was complicit in altering grades for students (some of which were actually pleased with a D) and directing students to AFAM courses is currently the university's Parr Center for Ethics director. 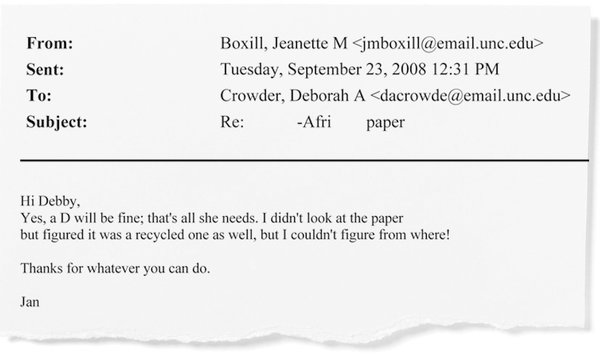 Kenneth Wainstein’s independent investigation implicates the football program, but conveniently enough, it also quarantines the basketball program's leadership from the pandemic of academic misconduct. UNC's former athletic learning specialist Mary Willingham challenged one of Roy Williams' assertions that one of his players couldn't read and was summarily dismissed by the head backetball coach, who then backed down when she challenged him to meet with her and was told by a group of researchers hired by UNC to investigate that her assertions of the university admitting athletes who didn't possess high school literacy were invalid. A  few weeks later, she reigned due to a hostile work environment.

Former UNC basketball hero Rashad McCants led the chorus and sang about Williams' direct involvement, but was dismissed as nothing more than a disgruntled ex-athlete.

Maybe, I’ve been jaded after years of corruptive practices by athletic departments protecting their golden gooses, but it seems convenient—too convenient that the coach whose players (Julius Peppers and Michael McAdoo) got this thing poppin’ off, and whose own player explained in detail how he directed him to particular AFAM courses could have been so unaware of what was transpiring around him.

At the very least he was incompetent. At worst, he was complicit. The same applies to his predecessors Steve Doherty and Bill Guthridge.

This isn’t the first academic scandal to be exposed in recent years, but is the most organized and extensive one thus far and in history.

The closest academic scandal involving Duke occurred in 2007 when 15 prospective Duke MBA students were nearly expelled for corroborating on a take-home exam. The previous unofficial record for academic fraud dates back to the mid-90s at Minnesota where Gophers tutor Jan Gagelhoff copped to completing 400 assignments for 20 players.

In the midst of their most successful period on the hardwood in school history the Gophers were banned from the postseason for four years, all honors dating back to the 93-94 season where extrapolating and head coach Clem Haskins was given a seven-year show cause penalty

Two years ago, the Ivy League was scorched by a Harvard cheating scandal which was contained to a government class’ take-home final as well as 70 students and members of their top-25 ranked basketball program.

Notre Dame football and men’s basketball has been rocked by a string of ongoing miniature academic scandals involving their starting quarterback and returning scoring leader, which they hope—no pray, don’t mushroom into a full-blown crisis.

It’s too late for UNC. The NCAA’s enforcement lacks any structure as it relates to comeuppance, which has led to the inevitable “death penalty” murmurs.

The merits of the “death penalty” are up for debate, but the one characteristic that separates UNC from SMU is the recidivism. SMU’s administration blatantly continued paying player contracts they still owed money on after getting sanctioned the first time. UNC began scaling back the cheating efforts after Crowder retired in 2009 and by 2011, the African studies department had been sterilized.

A lobotomy slightly worse than the one originally performed at Penn State should be on the table though.

It took 18-years for UNC’s answer to Ed Martin to get caught, but the walk towards the gallows should be much shorter.