The 2015 Little League World Series begins on August 20th, but the fallout from  Little League International’s decision to strip Jackie Robinson West Little League of its 2014 United States championship is just heating up.

JRW made history by becoming the first all-black squad from an urban city to win the coveted Little League World Series last season. The entire LLWS was a PR grand slam and a wonderful advancement in the perceptions concerning race and baseball and a revelation of its growing diversity at the grass roots levels. In addition to JRW’s dominant display of power, speed, pitching and personality, 13-year-old pitcher Mone Davis from Philly, captured the hearts of America by becoming the first young lady to toss a shutout in a LLWS game for her Taney Dragons squad.

Jackie Robinson West is a league — a baseball haven — operating on Chicago’s crime-ridden South Side and it has a long-standing baseball tradition fueled by the communitys love for the sport. They advanced to the first round of the 1983 World Series, coached by the late Joseph Haley, and after a few near misses, they finally went back to the World Series and shocked the nation by bringing home the U.S. Title.

It may not have been a huge story in the 1980’s when over 20 percent of MLB was black, but in todays climate when the numbers are below 8 percent (and even ex-MLB Commissioner Bud Selig displayed an increased concern for its dwindling African-American base), the success of JRW was inspirational and uplifting for a community of people. The accomplishment put a darker face on baseball while shedding a light of hope concerning the African-American athlete’s viable future in the sport.

Then all of a sudden a dream season became a nightmare for the young African-American men of JRW.

Little League International determined that Jackie Robinson West used a falsified boundary map for their 2014 tournament, and that JRW officials met with other leagues in Illinois District 4 to try to get the territory they wrongfully claimed was theirs for their 2014 tournament. Jackie Robinson was officially stripped of its championship in February

In the blink of an eye, the pride of a city became labeled as cheaters and that doesn’t sit well with the parents, community leaders or politicians in the Chicago community. A community that has refused to abandon its team of spectacular ballers and despite the turn of events, continues to fight vehemently to regain the community’s lost baseball dignity. The JRW officials — the true perpetrators of whatever infraction was found — are hiding in a hole somewhere until this travesty blows over. Everybody else is still on the grind.

According to CBS 2 in Chicago, lawyers for Jackie Robinson West have filed a lawsuit against Little League’s governing body questioning the fairness of the decision. According to the report, JRW is not denying having ineligible players on the roster. Instead, it is questioning the methods and procedures of Little League International, the timeline of the events and the basis for the decision itself.

“Until Little League International establishes to us that they have, in fact, acted properly, then we are not willing to concede that these young men are not still the champions from 2014,” said Victor Henderson, attorney for JRW.

Henderson said he isn’t claiming JRW did not have ineligible players on the field, but said the Little League rulebook requires the league to check each team’s paperwork during tournament play, and any protests should be lodged before the games are played.

In basic terms, JRW is petitioning for Little League to turn over all of its unseen information to help determine whether it’s satisfied with the process. They want to make sure that every player on every other team submitted the proper paperwork and were held to the same standards of scrutiny and procedural compliance. Little League International said it had not reviewed the petition and could not comment on it. But in a prepared statement, the league said it takes” player eligibility seriously and all 152 teams in last years 16 regional tournaments underwent the same verification process”.

This law suit will probably rub a lot of folks the wrong way. How can you justify cheating by saying the convicted cheater wasn’t treated as fairly as another cheater would be by the system ? But let’s be blunt. JRW questions whether or not LL International would have gone through such lengths to acknowledge parent rumors from opposing teams and obvious hatorade tactics and risk retroactively crushing the spirits of an entire baseball program and embarrassing an entire community, if that said community wasn’t comprised of inner city African-American kids.

Ultimately, JRW wants to determine if it was treated fairly in comparison to others leagues and teams. There are certainly those who believe that isn’t the case, and according to many of them Little League’s decision may have been fueled by racism.

“…if JRW made any mistakes  and they likely did  they will acknowledge them, but (we still) believe they were singled out for punishment, and held to standards other teams didn’t have to meet.”

There are people (like Chicago.com’s Dan Bernstein) who feel that JRW should accept the punishment, regroup and go at it again in a few years with all their legal and zoning wrinkles ironed out. They say the adults are only making it worse for the kids who have suffered enough. This is America, however, and JRW has options of defending its integrity in a court of law where the issues can be debated by competent litigators away from the influence of media and social media sensationalism. The bottom line is, JRW has some legitimate issues with how this situation was handled…or mishandled.

The Chicago Tribune has been all over this story and outlined Henderson’s case.

To make their case, Henderson and team officials on Wednesday released a 100-page report documenting the team leaders’ correspondence with officials at Little League International and defending their actions.

The report includes emails between the team’s director, Bill Haley, and a Little League official whose name and email address are blacked out. The documents show that starting in September 2014, there were questions about where the Jackie Robinson West players lived and whether they were within the proper boundaries.

But Henderson said those questions were raised too late.

One letter in the report, which appears to be from Little League officials, states that league staff reviewed JRWs records and determined the players met the proper requirements.

Henderson said none of the parents or coaches knowingly allowed boys who didn’t live in the district to play.

The saga continues for last year’s LLWS darlings, but this summer a new crop of kids will capture the hearts of baseball fans across the world as 2015 LLWS champions. The memories of JRW’s auspicious rise and disheartening fall will fade into memory like so many game-winning homers.

On the South Side of Chicago, however, trying to regain the lost 2014 crown is a fight they can’t relinquish. The integrity of every kid on that team, their community and the coaches are at stake. This is a bigger battle than any they’ve had on the baseball field and JRW’s reputation as odds beaters in life and baseball will really come in handy against a governing body that is pretty straight down the middle with matters such as this. Or so they say. 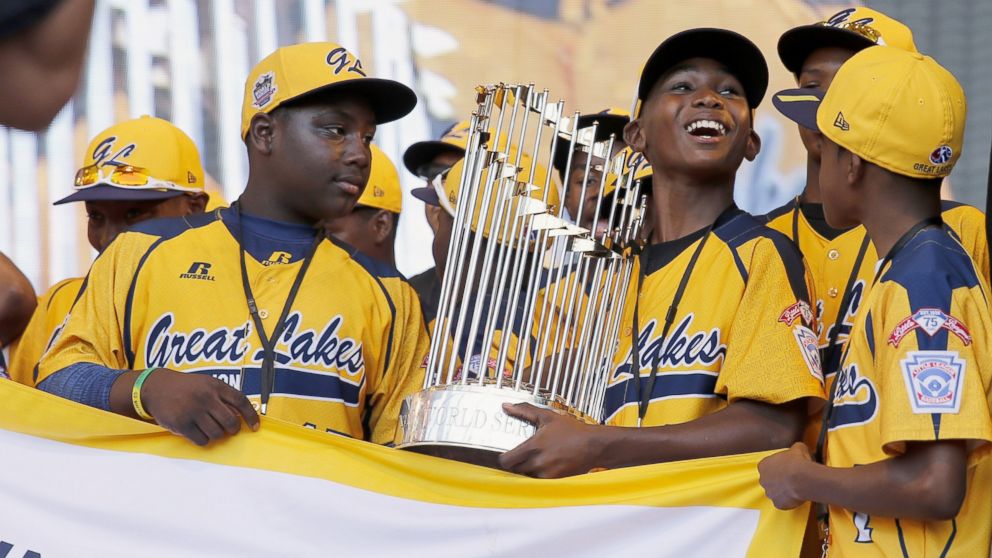