April 13th is Jackie Robinson day, when the baseball world annually celebrates Robinson’s barrier-breaking entrance and unrivaled contributions to MLB from his integration of baseball in 1947 to his mourned death in 1972.

Every player will be wearing Robinsons number No. 42 as a symbol of respect and honor for a man who endured so much so that the African-American and Latino players of today can survive, thrive and get paid in the lucrative and once segregated MLB.

During the past decade, starting with former commissioner Bud Selig and continuing with current commish Robert Manfred, MLB has made a conscious effort to diversify baseball at the grassroots level. they’ve also honored the African-American ball players who have historically made this game one of the greatest pro sports in existence, and elevated baseball to a social standing in this country that could once be considered exemplary, society-altering and pioneering.

In an effort to revive baseball in the inner cities and urban communities, baseball has set up new departments and initiatives with these specific goals and hired a multi-cultural staff of former players and baseball people to carry out these initiatives and guide baseballs mission.

Most recently, Del Mathews was hired by MLB and named its Senior Director of Baseball Development, which includes overseeing the day-to-day operation of the the leagues Urban Youth Academies. A former minor leaguer in the Milwaukee Brewers organization, Matthews comes from a family deeply-entrenched in the MLB machine. His dad Gary Matthews Sr., AKA Sarge was a star player who helped lead the Cubs to the 1984 National League East title.

His brother Gary Jr. was a productive MLB player for 11 years in the league.

His mission will be to have academies representing underserved communities across the country, and ultimately, changing the lagging participation of urban kids in the national pastime.

In one-on-one conversations with Matthews, however, he also agreed that “every mission must be funded” and his new position, since transferring from his position as assistant director of player scouting and development  with the Chicago White Sox, is another example of MLB putting its money where its mouth is.

Major League Baseball and the Jackie Robinson Foundation (JRF) announced today that MLB has increased its financial commitment to the Foundation and that the two organizations will expand their programmatic partnership beginning this year. MLB will fund 30 four-year JRF scholarships one for each of the 30 MLB Clubs and by contributing $1 million to the Foundations Jackie Robinson Museum project.

Jackie Robinson inspired change throughout the National Pastime and society, said Commissioner Manfred in a statement released by MLB and JRF. “Major League Baseball and its Clubs have long been proud to support the Jackie Robinson Foundation, recognizing the Foundations important role in perpetuating Jackies legacy by advancing education. MLBs expanded commitment reflects a shared desire to inspire and broaden opportunities for young people in our communities to truly reflect Jackies vision for our American society and positively impact future generations.

Said Della Britton Baeza, president and CEO of the Jackie Robinson Foundation: This increased support from MLB and Commissioner Manfred for the Foundations scholarship program and to help bring the Jackie Robinson Museum to fruition provides a tremendous boost to our efforts. We are thrilled also about the Commissioners commitment to expand…both job opportunities and community service engagement for JRF Scholars, not to mention the benefits to the greater community of young people.

JRF Scholars will also mentor participants in these various youth programs, encouraging their young mentees to embrace educational opportunities and joining them in extra-curricular activities, such as attending MLB games with the Leagues support. 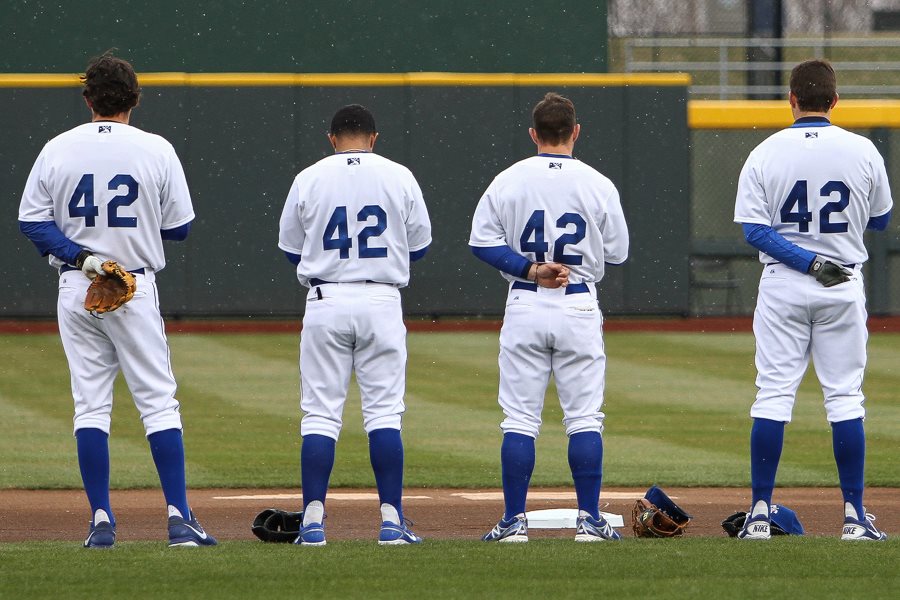 The LA Dodgers, New York Mets and New York Yankees organizations have been leaders with their generosity to the Foundation, donating millions of dollars and partnering with JRF around various initiatives.

Other Major League organizations that provide funding are the Baltimore Orioles, Chicago White Sox, Philadelphia Phillies, Boston Red Sox, and the San Francisco Giants, as well as a roster of current and former MLB players, including Derek Jeter and the Turn 2 Foundation, which has endowed a scholarship in perpetuity at the Jackie Robinson Foundation.

If the number of African-American players in MLB doesnt significantly increase in the next 10 to 15 years, it wont be baseballs fault. The league is continuing to raise the bar and push the envelope to diversify the game, introduce new potential players to the diamond and stress the importance of college and education while providing incredible athletic opportunities.

The increase in scholarships and funding is just another step towards strengthening the sport all across the board.

Why does baseball go so hard to support and ignite a passion for the sport in urban communities?

Because to give up on the African-American presence in MLB is to risk allowing Jackie Robinsons heroic and historic legacy as a civil right hero, baseball player, scholar, businessman and politician to fade away.

And baseball will never allow that.