Since Michael Vick was the No. 1 pick in the 2001 NFL Draft, he has been one of the NFL’s most tantalizing “what ifs.” He was undersized yet exceedingly talented, in possession of as many gifts as any quarterback ever. He was one of the fastest men in the league, had one of its strongest arms and the rarest characteristic in football — singularity. There wasn’t another Vick, hadn’t been another, and it seemed unlikely we’d ever see anyone else like him again.

We’re over most of that now. Even before Vick was incarcerated, the “what ifs” — what if his passing was even half as good as his running, if he learned to function in the relative safety of the pocket, if he was surrounded by better playmakers? — gave way to what was, and that wasn’t good enough.

Fast forward to 2013, seven seasons removed from Vick’s last as the Falcons’ starting quarterback. It’s insane to think of a 33 year-old, 13 years 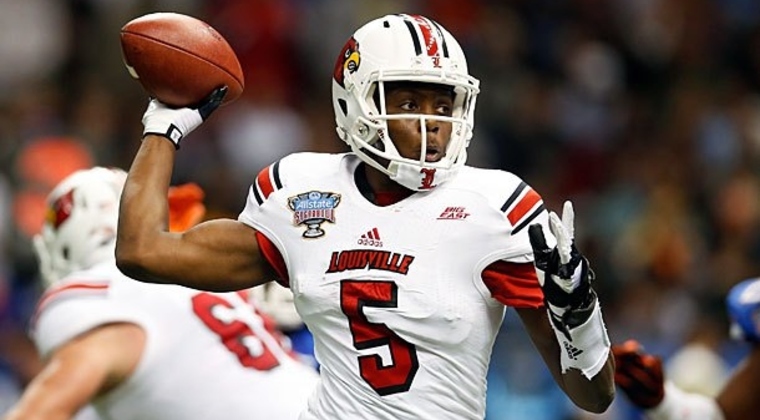 Teddy Bridgewater Is Another First For Black QBs:

The Louisville quarterback doesn't scramble much, but teams won't be passing up the chance to draft him No. 1 in next year's NFL Draft.

removed from his last season in college, in terms of potential. But here we are, at the dawn of the Chip Kelly era, with Vick preparing to lead a futuristic attack that rocked college football, and has already begun to influence play in the NFL. We don’t know just what Kelly will want to do, nor whether Vick is the man to make those things happen.

And just like that, the “what ifs” are back.

The “what ifs” relevant to the Eagles will play themselves out. But there’s a bigger “what if” out there, one that will color every Philly game I see this season.

This is the sort of offense Vick was born to play in. It’s one that would have better prepared him for the NFL than the scheme at Virginia Tech, where he attempted just 343 passes in 21 starts over two seasons. And given the success NFL quarterbacks — from Robert Griffin III to even Tim Tebow — have had with the read option and formations to utilize running threats at quarterback, it’s one that could have made a young Vick into something between a superstar and superhero.

He was ahead of his time way back when, or at least it seemed like it. Seeing what the Falcons could do around his legs, a counterintuitive notion in the NFL, had fans and pundits wondering if Vick would change the quarterback position. The obsolescence of the dropback passers like Drew Bledsoe, the No. 1 pick in 1993, was in forecast. The athletic quarterback, something the NFL long shunned — especially if said quarterback was black — suddenly seemed vogue, with emerging stars like Vick, Donovan McNabb and Daunte Culpepper.

But they were still guys who could run, running offenses built around their ability to pass. The Falcons tried to build around Vick’s legs when Jim Mora took over for Dan Reeves, but that system produced the 25th ranked scoring offense — 29th in net yards per attempt — in Vick’s last season as a starter. No quarterback had ever won because he could run, and as the rules changed to punish defensive ends for hitting pocket passers late — effectively slowing the rush — running became devalued. The game Vick was supposed to change? It changed right along with him, just enough to stay the same.

The intriguing thing about Kelly’s scheme — along with the one Kyle Shanahan runs in Washington and Jim Harbaugh’s offense in San Francisco — is that it’s built for the quarterback who can do both. It won’t shield a poor passer, nor will it protect a guy who can only run. It makes the most of the quarterback who can threaten teams in both ways. We’ll see if it’s an offense Vick can run in 2013, but it would have been the dream offense for the Michael Vick we used to know.

Of course, that dream would have required Vick be more grounded than he was. No quarterback could thrive in the NFL with his poor work habits, including his admitted laziness about studying his playbook. And that’s shameful, especially when each year will take more of Vick’s once-in-a-generation athletic ability from him. With each passing day, we move farther from what he could have been.

We’re about to see Vick, in football middle-age, run an offense we’ve only seen operated by young quarterbacks. Things like the zone read and pistol are new and sexy in the NFL, and Vick looks like he could fit right in at 33. He really may have been ahead of his time.