LeBron James is his own man, doesn’t have to be linked to other great NBA players before him.

You don’t have to talk about James and put Michael Jordan in the conversation.

Clearly, James can stand on his own from here on out.

On Sunday night, James sealed his legacy forever. He did something NO ONE has ever done in the Association.

James led the Cleveland Cavaliers from a 3-to-1 deficit over the Golden State Warriors to win the NBA Finals, winning Game 7 on the road in Oakland.

“I’m true to the game and I know what I bring to the table,” James said. “I came back for a reason. I came back to bring a championship to our city. I knew what I was capable of doing.” 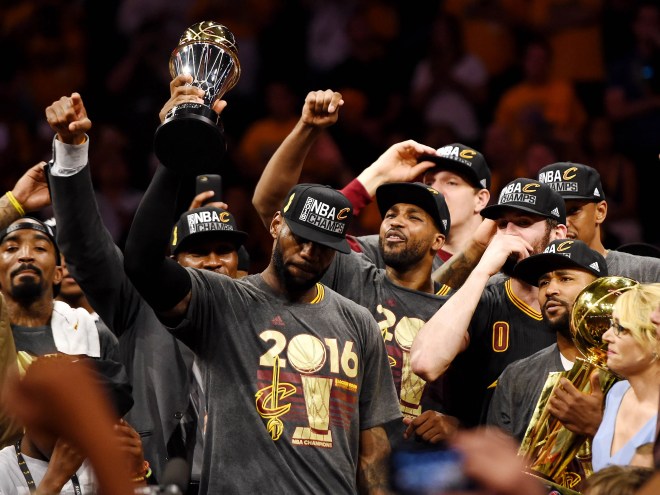 It was epic comeback for the ages. Plus, it gave the city of Cleveland its first championship in 52 years.

Better yet, James, who was named the Finals MVP after recording a triple-double, had a signature play in the deciding game.

For years to come, many will talk about The Block – James’ block on Andre Iguodala.

It came in the final minutes. With the score tied, the Warriors were about to take the lead on Iguodala’s fast break layup. But James flying out of nowhere pinned Iguodala’s layup into the backboard. It was clean. No foul. It was special, one of the all-time greatest block you have probably seen in a big time moment with so much on the line.

Coming into this series, James’ legacy was on the line.

Peeps, even the LeBron apologists, were ready to pounce if James came up short and his record dropped to 2-5 in his seven Finals appearances.

Instead, LeBron delivered on something he promised when he first got to the NBA and delivered something others – in any major sport in Cleveland – hadn’t been able to do in more than 50 years.

In the hardest path possible, LeBron delivered a championship to Cleveland for the first time since 1964. Yes, 52 years ago. The great Jim Brown got it done for the Cleveland Browns.

“Our fans, they ride or die, no matter what’s been going on, no matter the Browns, the Indians, the Cavs and so on, and all other sports teams,” James said. “They continue to support us.

“And for us to be able to end this, end this drought, our fans deserve it. They deserve it. And it was for them.”

Yes, the stakes were high for James and the negative narrative that would follow him for the rest of his life. Getting to another Finals meant nothing, especially for James. He was there last year against the Warriors and lost in six games without his two other stars – Kyrie Irving and Kevin Love.

The last time the legacy police were out in full force was when James was trying to get his third title in a row to cement his legacy as a winner, as a player who honestly did something special in the Association.

Despite having Dwyane Wade and Chris Bosh, it didn’t happen. The Heat lost to the San Antonio Spurs in 2014.

The third in a row would have sealed the deal for James. Not many great players have accomplished that feat.

Jordan, arguably the greatest player ever, did it twice. In fact, MJ was 6-0 in NBA Finals and won all six MVPs in those championship series.

That’s the standard James setup for himself. The reason he left Cleveland, according to James, was because he couldn’t win alone. He said he needed help, other great players. James had that with Irving and Love. There was no reason the Cavs couldn’t get it done – even against the coronated Warriors.

James refused to lose, refused to accept what history stated. The previous 32 teams that fell behind 3-1 in the NBA Finals went home without the trophy.

James has it, has his own place in history. He doesn’t have to share the stage with anyone else.

James’ scenario is kind of like Peyton Manning. He needed that other Super Bowl victory to cement his legacy as one of the greatest. It finally happened this past season. Manning is the only QB to win a Super Bowl with two different teams. Hence, his legacy isn’t debatable.

James ended his legacy debate as well by giving Cleveland a championship, in comeback fashion never seen before.