Kyrie Irving waited a long time and endured a lot of criticism before finally asserting himself as an NBA superstar, clutch performer and championship-ready partner to LeBron James with a legendary and career-defining 41- point performance helping the maligned Cleveland Cavs defeat Golden State 112-97 in Game 5 of the 2016 NBA Finals, cutting Golden States commanding series lead to 3-2 and staving off elimination.

He’s a very humble kid and very appreciative of his moment. That will go down as one of the all-time greatest moments in (NBA) Finals history by my point guard, said King James, who also caught wreck with a classic 41-point, 16-rebound masterpiece, regaining some of the luster he lost with Clevelands early series deficit.

The tandem became the first in NBA history to both drop 40 in the same finals game. It may have come against a compromised Golden State defense, but that doesnt change the magnificence of the moment or the impact of being able to send this series back to Cleveland on Thursday with a punchers chance of defying the odds.

With Draymond Green sitting out Game 5, Clevelands odds of extending the series and closing the gap were as good as they could possibly ask for. In Game 4, Greens growing playoff proclivity for nut hunting earned him a fourth flagrant foul and one game suspension. Golden State looked ready to close Cleveland out before Green was disciplined, but as expected his absence on Monday night was felt, especially on defense as James and Irving ran roughshod over a usually formidable Golden State D. King James was aggressive and lethal with his driving ability and long range hoisting.

All playoffs, heads have been crediting or complaining about LeBron basically playing by himself at times. Kevin Love may have deserved the abuse based upon his mediocre performance since joining Cleveland as the third part of what the NBA world expected and hoped would be a championship Cavs team, but Kyries been solid. The sad part is nobody cared because Cleveland was on the brink of elimination.

Now, hes getting his props. Thats what coming up clutch in a finals elimination game will do for your legacy. No matter how well the Cavs played in Game 5, coming back from 3-1 and beating Golden State at home was going to take a little luck. Kiki Vandeweghe threw Cleveland a bone and Irving did the rest, putting on a shooting exhibition and display of offensive prowess reminiscent of a Young Black Mamba when he was in his zone either fighting for his playoff life or trying to close out an opponent that stood between him and another championship.

Irving had the swag and the confidence and the deadly stroke. He was playground killer with his array of drives, jumpers, acrobatic moves, drop steps, pivots and change of directions. Despite LeBron’s offensive prowess and Klay Thompsons phenomenal aerial display, Irving was clearly the most unstoppable force on the court.

He was indeed the Ying to LeBrons Yang. When Golden State seemed to be mounting a mini comeback, Irving would get the ball and go head up with Curry and any other defender who dared to stop him. His performance was as good as any we have seen from any number of superstars on the grandest NBA stage, prompting analyst Mark Jackson to compare Irvings stellar performance to Isiah Thomas unforgettable Finals exploits. 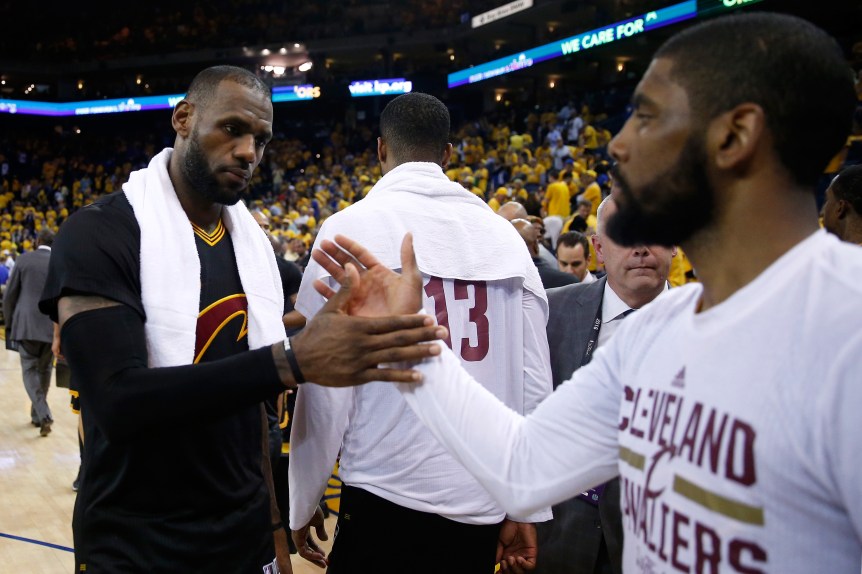 Kyrie had 34 in a losing effort in Game 4 and followed that up with Monday’s history making evening with James. With almost a yard of points from LeBron and Kyrie, Cleveland was able to withstand another three-point barrage by Golden State and most importantly keep Curry from going off. While Curry has been relegated to somewhat human status in this finals, Irving has risen to prominence and proved to the world that on any given day he can be the best guard in the league and shutdown the MVP on both sides of the ball.

Jackson summed up the evening best:  You step into any arena with LeBron James and Kyrie Irving,” the former Warriors coach told fellow analyst Jeff Van Gundy, ” and you have a chance to win. I dont care what the numbers say.