As the day of the indictment announcement approached in the case of Officer Darren Wilson shooting and killing Michael Brown in Ferguson, many in the African American community hoped a favorable decision would be rendered and prayed for justice in the death of Mike Brown; yet as time progressed, many recognized the unlikelyhood of this transpiring. The actions of the authorities would strengthen the growing belief among many that prosecutor Robert McCullough would fail to bring an indictment. The National Guard was called up by Governor Jay Nixon and a state of emergency was declared amid calls for restraint and peace almost a week before the announcement was made.

Yesterday, on the day of the announcement, information circulated that said the decision would be announced by 5pm, then 7pm and ultimately became 9pm eastern. The news was given in a rather uncompassionate, accusatory and defensive manner by Missouri prosecutor McCulloch. For those who have been following the case from its tragic beginning back in August, you might recall Missouri State Senator Jamilah Nasheed requested that McCulloch step down in a two-page letter.

Sometimes when Prosecutors hem and haw, drag their feet and intentionally smear the character of the victims of crimes – crimes that they should be prosecuting — those Prosecutors HAVE TO GO! Said Senator Nasheed:

“This racially charged climate demands an independent investigation, and to be perfectly blunt, the African-American community has no confidence that your office can carry out an impartial investigation and prosecution.”

Senator Nasheed cited several reasons for her lack of confidence, including McCullochs’ failure to bring charges against police officers accused of killing two African American men in 2000 despite findings from an independent U.S. Attorney Office investigation that those officers lied about their behavior and fired 20 shots into the unarmed victims’ vehicle.

Though Senator Nasheed’s request went unheeded, her words appear prophetic in hindsight as McCollough’s callous tone reverberated across the cable news networks from the very start of his statement on the indictment. Members of the grand jury, whose identities remained concealed but reportedly contained nine whites and three blacks (one black male), had been meeting weekly since August 20 to consider the evidence. In announcing his conclusion, the prosecutor explained that his office gave all the evidence to the grand jury months ago but offered no recommendations and almost appeared to blame Brown for his own death.

While we don't have any resident legal expert on staff, our cursory research has not been able to locate any precedent for the actions of McCullough. The prosecutor stated that the witnesses’ contradictory testimony was another reason why charges were not filed. But the witnesses’ inaccuracies in light of the facts appeared to have carried far more weight than they deserved to. Right or wrong, many can attest that flawed witness testimony has never stopped people from being thrown in jail in the past.

It has also been revealed that the Ferguson Police department did not file an incident report on Brown’s fatal shooting but were very cavalier in the manner they released the video of a shoplifting incident in which Brown was a suspect as well as an incident report for the same crime. Additionally, McCullough was unable to answer several questions regarding Officer Wilson’s justification for the use of deadly force. Though the authorities have released their version of the incident, Wilson’s use of deadly force against an unarmed civilian was never addressed, but McCullough did mention that there was a scuffle between Brown and Officer Wilson in or near the vehicle in which the Ferguson Police Officer fired two shots that grazed Brown. His 20-minute diatribe seemed to be more of an attack on media outlets and social media, and defense for his department and Wilson rather than an explanation of their conclusion. But the real kicker was Wilson’s explanation of his thought process leading up to the shooting.

According to Wilson’s testimony, which was released as part of a 1,000 page report following the announcement, the officer says he called for backup and attempted to block the street with his vehicle. When he tried to open his door Brown slammed the door shut. Wilson then says he tried to push Brown with the car door but was punched in the face by Brown. In addition, a photograph was released of Wilson’s injuries he claims were caused by the alleged Mike Brown punch. The photo shows slight discoloration above Wilson’s right cheek. 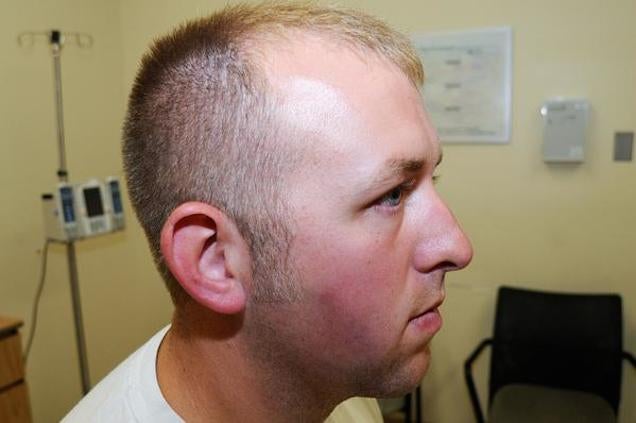 “What do I do not to get beaten inside my car” he told investigators.

“I tried to hold his right arm and use my left hand to get out to have some type of control and not be trapped in my car any more. And when I grabbed him, the only way I can describe it is I felt like a five-year-old holding onto Hulk Hogan,” Wilson reportedly said.

“Holding onto a what?” he was asked.

“Hulk Hogan, that’s just how big he felt and how small I felt just from grasping his arm,” Wilson replied.

Wilson told the grand jury he then drew his firearm. “I said, “Get back or I’m going to shoot you.”

“He immediately grabs my gun and says, “You are too much of a pussy to shoot me,” Wilson told grand jurors. He said Brown grabbed the gun with his right hand, twisted it and “digs it into my hip.”

Asked why he felt the need to pull his gun, Wilson told grand jurors he was concerned another punch to his face could “knock me out or worse.”

Upon reading Wilson’s testimony it is absolutely clear to this reporter that he played on the sympathies and inherently racist ideas of the investigators and the prosecutor’s office. His explanation for the use of deadly force appears to have been meant to make himself seem helpless in the wake of this raging black buck. But he had a gun and backup on the way while Brown was unarmed. Additionally, Mike Brown’s alleged “p*ssy” comment seemed way over the top for any person involved in a life or death struggle to say. It just doesn’t seem plausible. After all, Officer Wilson stands nearly 6ft 4in tall himself and is trained in hand-to-hand combat as most law enforcement officers are.

Wilson went on to say that Brown attempted to flee after the initial shots were fired. The officer also says Mike Brown turned around and charged him at which point he fired the fatal shots. That sounds highly unlikely seeing as though Brown was already wounded at that point and had no weapon. That just sounds too convenient in support of Wilson’s justification for the use of lethal force.

As was expected in the wake of the announcement, the night's peace vanished, replaced by loud protests, sporadic arson and looting. There were several non-violent protests that took place across the country in Oakland, Los Angeles, Seattle and New York City. At the end of the day, another Black male is dead at the hands of a person who was sworn to serve and protect. We are not disputing whether or not Brown committed a crime on the day he was accosted by Officer Wilson. However, the circumstances leading up to his death as described by authorities seem "shady" as Wilson portrays himself as a floating leaf in the gale force winds of Mike Brown’s rage. What is certain is the outcome was a foregone conclusion prior to the actual announcement.

Once again, justice is denied, or at the very least, differed yet again.