On Saturday the Jackson State Tigers capped off a perfect run through the SWAC with a 27-10 win over the Prairie View A&M Panthers in the 2021 SWAC Championship Game. The Tigers finished their season 11-1 overall and 8-0 in the SWAC.

As they prepare to face MEAC Champion South Carolina State in the Celebration Bowl and we reflect on Deion Sanders’ historic season, there are five moments that stand out above the rest.

Moments that defined and shaped this historic season, the best in JSU history.

The hiring of Pro Football Hall of Famer Deion Sanders as head coach was the beginning of change at Jackson State. Sanders assembled a respected and experienced coaching staff, and then he hit the recruiting trail and landed the No. 55 class in college football. It’s the highest-ranking class ever in FCS or D1-AA football.

HBCU Football has never been so visible. So respected. Sanders has raised the brand and masterfully marketed everything that’s great about a Black college football school. His game-changing talent has once again been recognized.

Congratulations to @DeionSanders aka Coach Prime…who was named by EBONY as its "Game Changer of the Year", in part of the magazine's 2021 Power 100 List!https://t.co/XDRuD0VEpN pic.twitter.com/YJHH4Gd2f4

The Tigers traveled to Miami to open the season and faced conference foe Florida A&M in the Orange Blossom Classic. On a hot, humid day the Tigers eked out a tough 7-6 win. Their only time touching paydirt came on a Sanders QB sneak from the 1-yard line. But the biggest moment of the day came in the pregame speech given by Coach Prime.

He called it his “It’s Time” speech, and it seemed to resonate with his players as they executed at a fast and furious pace until the final gun.

During the SWAC’s hyphenated spring season the Tigers lost to eventual champion Alabama A&M 52-43. Following the loss, Sanders’ was needled by opposing coach Connell Maynor. Maynor insinuated that Sanders should step up his recruiting game and check the culture of his media-darling program.

“Coach Sanders says he wants some dogs,” Maynor announced. “Well, I’m about to turn some dogs loose on him.”

“Coach Sanders says he wants to see some dogs. Well, I’m about to turn some Bulldogs loose on him.” – Connell Maynor

Congratulations and safe travels back to “The Hill!” pic.twitter.com/YUU03P876i

Coach Sanders used that loss as motivation for this season. During the loss he turned to his son Shedeur, who wasn’t eligible to play yet, and said:

“This is never gonna happen on your watch.”

'This is never going to happen on your watch:' What Deion Sanders told his son during loss https://t.co/d8sxousInB

Fast forward to the 2021 fall season, and the next meeting was completely different. With Shedeur under center, the Tigers throttled the Bulldogs 61-15 at their homecoming. The ribbing between the two coaches wasn’t anywhere near done, as Sanders, who’d just had surgery on his foot/toe was using a scooter to get around.
So in typical Maynor fashion, prior to the matchup he had to mess with Coach Prime about his compromised state, making it personal.

Sanders obliged and did just that, sending Maynor a scooter to rest his butt after the whupping his team took at the hands of JSU.

“With love, #CoachPrime. I apologize for giving him what he asked for!!! I’m from Florida y’all know he we get down. THEE I LOVE JSU!!! 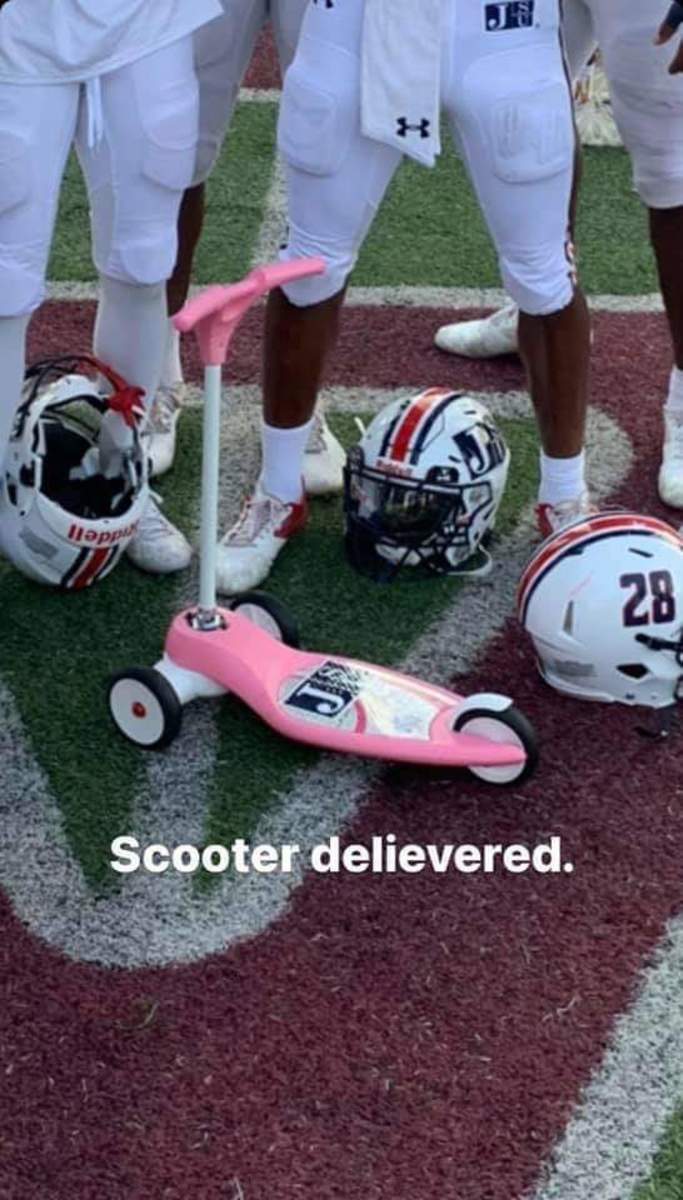 4. Sanders Hospitalized After Doctors Order To Stay Off Surgically Repaired Foot/Toe: Team Rallies Around Him

Sanders was hospitalized prior to the Tigers game against Bethune-Cookman. What was originally predicted to be a one-game absence turned into three consecutive games missed for the hospitalized — and per reports — very sick Sanders.

Deion Sanders Has Been Dealing With ‘Significant Trauma’ | Coach Prime Sends Out Tweet, Could Return To Sidelines In Two Weeks

The team played well under the leadership of assistant head coach Gary “The Flea” Harrell, while rumors of TCU being very interested in possibly hiring Sanders as their new head coach swirled. There were even reports of an in-hospital interview between the two. Through it all, the team kept winning.

‘TCU Is Not The Only One Interested In My Services’ | Deion Sanders Is Staying At Jackson State, But Says People Are Trying To ‘Figure Out The Formula’

As recent as Monday, Sanders’ name was surfacing as a potential candiate for the Colorado State job since the school has parted ways with Steve Addazio. The Rams eventually hired Jay Norvell, but the Coach Prime name is being mentioned in hiring circles all over the country.

5. The Play Of True Freshman Shedeur Sanders Was Expected, But Not To This Level

In the game of football, quarterback is the most influential position. It can make or break a team. That’s why the signal callers get all the garbage and all the glory. If you have one that you can build around then you’ll compete with the best teams. If not, then it’s hard to compete at a high level on a week-to-week basis.
Shedeur has provided the Tigers with elite play at the position. Each week Sanders played like a 10-year pro, dissecting defenses, while making quality decisions. He was named SWAC Freshman of the Year, and 2nd Team All-SWAC. His dad thought he got snubbed and deserved to be SWAC Player of the Year and a First-Team selection.

‘Give Him What He Should Have Coming’ | Deion Sanders Wins Coach of the Year, Hot About Son’s All-SWAC First Team Snub

Minor conflicts about awards shouldn’t stain what was a landmark season for HBCU football. Although we know Deion wants to eat everything on the table. Shedeur will be the favorite to win SWAC Player of the Year next season, and the young phenom is still a finalist for both the Walter Payton and Jerry Rice Awards.

The Sanders Family Effect set a new standard at Jackson State, and the future is bright. There’s one more hurdle to leap in the Celebration Bowl.