The core of the 08 Celtics championship squad had a reunion of sorts on Kevin Garnetts Area 21 show and there was one notable piece to that championship puzzle that was missing in sharp-shooter Ray Allen, who fled Boston after a Conference Finals loss to Miami in 2012.

Some say he broke up The Big Four to chase a ring in Miami with LeBron and Co.

The fact that Allen fractured Boston’s five-year run as chip contenders is not why Kevin Garnett, Paul Pierce, Rajon Rondo, Kendrick Perkins and Big Baby Davis excluded him from their trip down memory lane and used the first six minutes of the show to lick shots at Allen.

Kevin Garnett and company left Ray Allen out though. pic.twitter.com/OQZucmpM3D

Style is everything, especially in basketball, and the way Ray handled his free agency was suspect. Garnett, who opened the discussion as a way to clear the air on the subject and clarify some things for the public, spoke first and kept his tongue-lashing brief and respectful.

When Ray decided to go to the Heat I feel like he moved on, Garnett said. 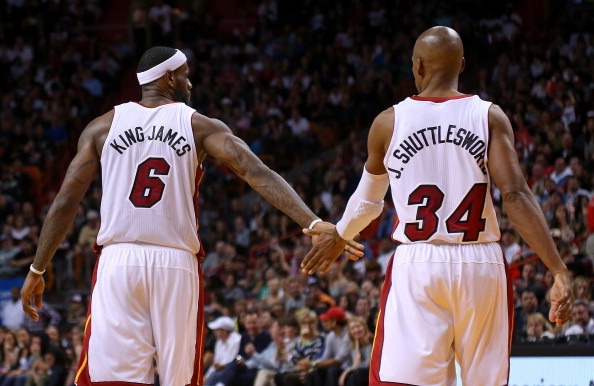 I was initially hurt by the whole way it went down, the recently retired Pierce added, but I dont have any beef with any of my teammates.

We talk everyday…then when it was time for free agency.., Pierce continued, I thought we formed a brotherhood here in Boston…That’s what I was hurt about when Ray didnt give us a heads up about it.

Said Perkins: It ain’t what Ray did. Its how he did it.

Those fellas developed a tight bond and feel like Allen snaked them. Ray didnt give them a heads up and they felt like his rocky relationship with Doc Rivers or his desire to move on shouldnt have stopped him from being honest with a group of guys who were all depending on each other.

If we all just talked about it, we could have worked it out, was the prevailing theme.

Its like a family dispute and everyone feels that they were betrayed and deserve an apology from one specific member of the family. Allen probably feels he doesnt owe them an apology because he gave his brothers his heart and soul for five years and helped bring a ring back to Boston for the first time since 1986.

While each player, except for Rondo who remained curiously silent on the issue, dispensed some verbally potent tough love towards Allen, Big Baby and his Big Brothers left the door open for a reconciliation, but they arent going to be the ones to text Allen or hit him on The Gram.

Its on Ray to break the ice, said Perkins. Its on him to reach out and say, hey P, I handled this wrong, we better than that.

These ole’ heads are taking this real personal. When in reality they should have listened to rapper Nas on the song “Watch Dem N*****.”

LeBron changed the game and Allen was just staying ahead of the curve. Never personal, nowadays it’s the wave.