Spurs head coach Gregg Popovich went in on “President” Donald Trump once again this weekend after the inauguration.

Prior to the Spurs tipping off against the Cavs, Pop commented on the problematic inaugural speech, the bizarre false claims about the size of his inauguration day crowds, the womens marches which took place all over the world, and the folks now sitting in the presidential cabinet.

Id just feel better if somebody was in that position that showed the maturity and psychological and emotional level of somebody that was his age, Popovich said. Its dangerous and it doesnt do us any good.

Popovich has not shied away in showing his disdain for Trump recently. Following the election he said he was sick to his stomach, and he has continued to speak about the things that trouble him with the current administration. 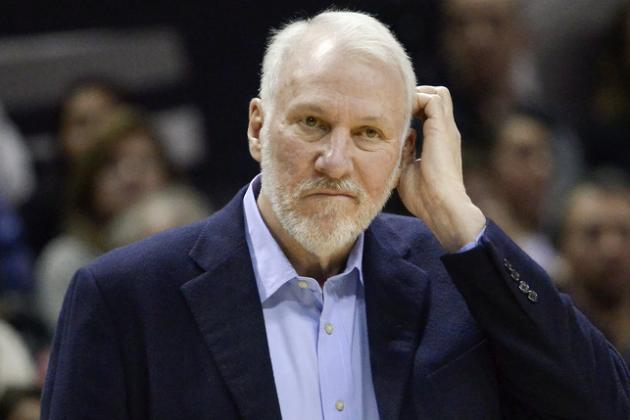 Here are his comments from this weekend:

“The march today was great. That message is important and it could have been a whole lot of groups marching. And somebody said on TV, Whats their message? Well, their message is obvious. Thats, our president comes in with the lowest (approval) rating of anybody whoever came into the office. And theres a majority of people out there, since Hillary won the popular vote, that dont buy his act. And I just wish that he was more had the ability to be more mature enough to do something that really is inclusive rather than just talking and saying, Im going to include everybody. He could talk to the groups that he disrespected and maligned during the primary and really make somebody believe it.

But so far, weve got to a point where you really cant believe anything that comes out of his mouth. You really cant. All those thousands that were over on the rooftops after 9/11? There were like two. And, We went to Hawaii and checked (Barack Obamas) birth certificate and investigators couldnt believe what they found! There wasnt anything there. That kind of thing.

So, its over and over and over again. With the CIA today, instead of honoring the 117 people behind him where he was speaking, he talked about the size of the crowd. Thats worrisome. Thats worrisome. Id just feel better if somebody was in that position that showed the maturity and psychological and emotional level of somebody that was his age. Its dangerous and it doesnt do us any good.

I hope he does a great job but theres a difference between respecting the office of the presidency and who occupies it. And that respect has to be earned. But its hard to be respectful of someone when we all have kids and were watching him be misogynistic and xenophobic and racist and make fun of handicapped people. And what really bothers me are the people around him. The Sean Spicers, the Kellyanne Conways, the Reince Priebuses that know who he is and actually have the cynical approach and disingenuous attitude to really defend him and try to make it look like he didnt say what he said. And so when hes mad at the media for them reporting what he said, that just boggles my mind.

Kellyanne Conway the other day said that he wasnt really making fun of that handicapped person. Its beyond, its incredible. It just really makes you wonder how far would someone go to actually cover for somebody that much. The comment was, Well you have to look in his heart, you dont know whats in his heart. He wouldnt do that. Well, no, he did it. And all the things that he said during that time, if our children wouldve said it wed (have) grounded him for six months. Without a doubt. But we ignore all that because, because why? That says something about all of us and thats whats dangerous, or thats what scares the hell out of me to this day. It makes me uneasy.

But I felt great today watching the march in protest to how he has conducted himself, because it tells me hey, I really do live in a country where a whole lot of people care. And we have to be vigilant to make sure that, although we all hope that he does good things for our country, that we dont get, you know, embarrassed by him, and roll back liberties that have been worked for so long in so many different areas. So, I think thats enough to make somebody think I sound horrible.

Well, I think you know when the media reports what he says, Im not sure why he can get angry about that. But it is, it does boggle the mind how somebody can be so thin skinned. Its all obvious, its about him. If anything affects him, if its Saturday Night Live or Hamilton, or she got three more million votes than you. Theyre illegal. It doesnt matter what it is, theres a pattern there. And thats dangerous. Id like to have someone with gravitas, but he got there through the electoral college which is part of our system, and I hope he does some good things. I just, there was a young lady on TV today who said I just wished he had gone up and said something like, And I know I said certain things …, or, You know I would really like to bring the people who dont feel …, or, I know some of you are scared. But he cant do that because bullies dont do that. Thats why.