Tom Cruise has a stranglehold on the box office once again as Mission: Impossible-Rogue Nation knocked off Ant-Man with a $121 million global weekend. The $65 million international tally bested Ghost Protocol, the last film in the M:I franchise, by 49%, according to deadline.com.

Today the nation prepares to set their hair ablaze once again with Mission:Impossible-Rogue Nation.

Fans will look at the ageless 53-year-old get it in this Brian McQuarrie directed film. And he does indeed get it in. In Rogue Nation Ethan Hunt, played by Cruise, finally meets his match with the Syndicate-a highly-trained secret organization that wishes to operate around the globe with impunity.  They know they have to destroy the IMF to get it done, and thats something your boy Ethan Hunt is not trying to hear it. As is often the case with sequels, this Mission:Impossible features a new cast of characters headed by Jeremy Renner (CIA attach William Brandt), Sean Harris (Solomon Lane), Rebecca Ferguson (Ilsa Faust).  You will also find mainstays Simon Pegg (IMF associate Benji Dunn) and Ving Rhames (Luther Stickell) to show up as well.

Okay, heres the skinny and fat of the matter:

The film opens with a group of IMF agents attempting to extract some very hellacious weapons of mass destruction from a group of Chechen separatists that will not hesitate to use them on civilians. As Benji is in the field trying to remotely hack the plane, Luther is in on an entirely different mission but is sidetracked by Benji for assistance with a satellite link that will in turn allow him to hack the plan. Tension mounts as the rotors on the massive military transport plane begin to power on. Benji begins to sift through multiple protocols to try to stop the plane, but to no avail. The plane taxis onto the runway when, lo and behold, the legendary Ethan Hunt can be heard on the two-way radio as he sprints toward the aircraft and mounts the left wing as the plane begins to accelerate.

Benji finally gets the aircraft door open, but its the cargo bay door and not the personnel door on the side of the plane.  Hunt clings to the plane with all his might as it lifts off. His person is thrown to and fro by the wind, tugged to the extreme by gravity as the aircraft begins to go vertical. Just when it seems as if Hunt will be yanked to his doom Benjis hack finally goes through-which is both a good and bad thing. Yes, the door is open, but the sudden change in air pressure sucks him through the door and almost ejects him right out the still open cargo bay door.  Luckily theres was a large crate filled with shells some really bad people killing juice that stopped his momentum. All this was within the first ten minutes of the film. That was when it became quite obvious that this would be the most action-packed, super-spy slap down weve seen in within the entire Mission: Impossible franchise.

Back stateside the IMF is being accused by a new, no-nonsense CIA director Alan Hunley (played by Alec Baldwin) of being too reckless, out of control and obsolete given the evolved state of world affairs relative to the Cold War era. He lobbies a Congressional Oversight Committee to have the group disbanded and declared criminals after the IMF is implicated in bombing the Kremlin, which happens.

Just as the IMFs fate is being decided in the United States, Ethan Hunt is locked in a dungeon at an obscure location in a foreign land after being forced to helplessly witness the murder of his secretary before being gassed. He wakes up to the sound of a mysterious but beautiful young woman who appears to be on the verge of torturing him.  She approaches our hero slowly and sexily before another party enters.  It is a typical Eastern European-looking henchman with a typically bad guy-sounding name, the Bone Doctor aka Janik Vinter.

Here we find out the mysterious womans name, and a brief part of her game.  Her name is Ilsa and she kills several men who appear to be her allies then assists Ethan Hunt with his escape.

After he emerges and tries to call for extraction, then realizing his organization has been outlawed by the United States government while he was detained, Hunt goes underground and becomes more dedicated to solving the mystery of the Syndicate than ever. 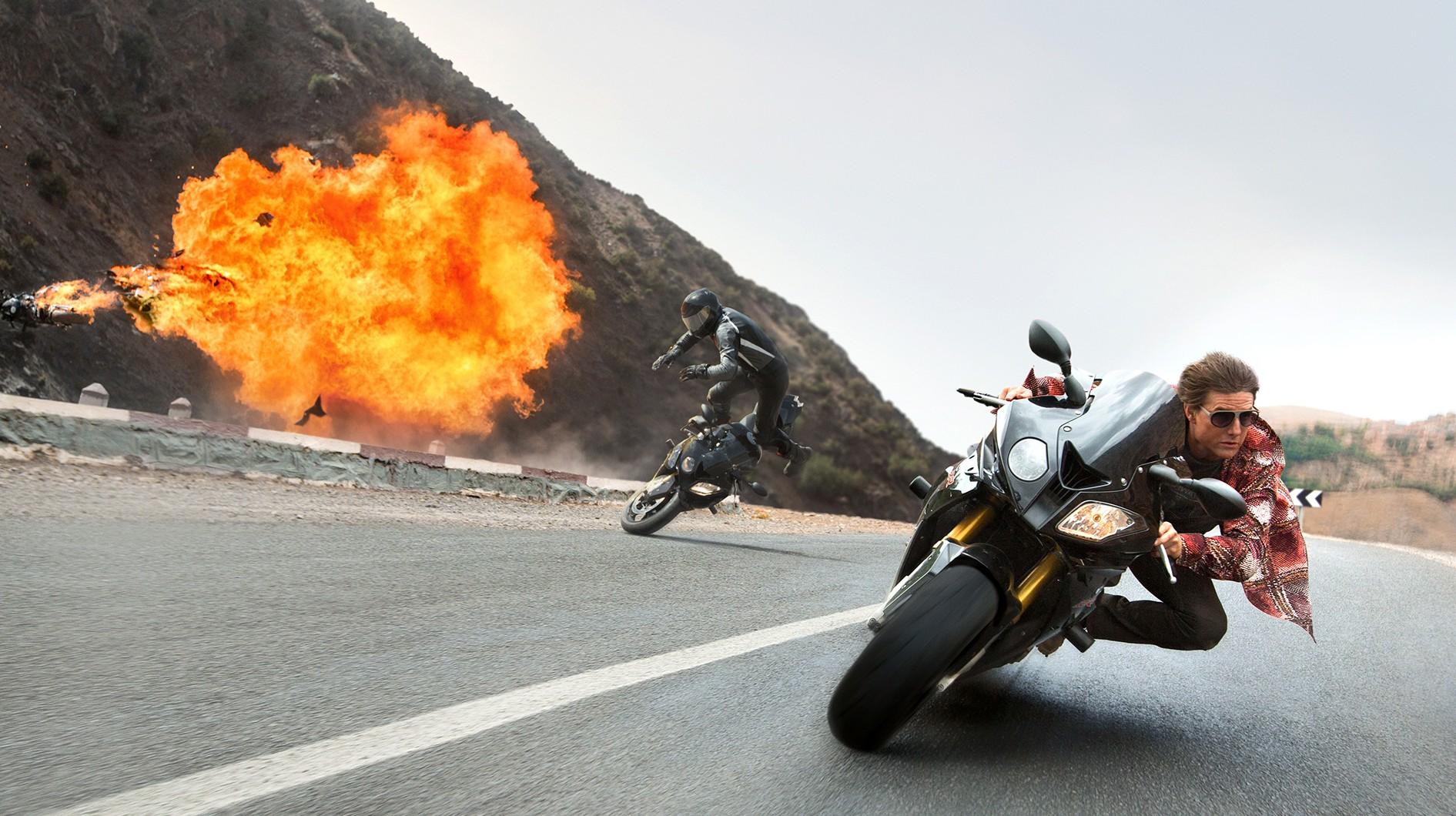 Some its easy to forget that Tom Cruise is still a big time blockbuster draw. Thats why he gets the big money.  This Mission: Impossible franchise started as just another action movie for a man whose career includes such classics as Top Gun, Jack Reacher, The Last Samurai and Collateral. But this might be one his most thrilling films Cruise has ever appear in. Thats saying a lot.

Writer/director Christopher McQuarrie was able to meld together a series of thrilling cliffhangers in rapid succession, keeping the viewer on the edge of their seats regarding what was coming next.  Underwater with no oxygen mask, in an opera house in search of a master in espionage and counterintelligence, or riding motorcycles on the streets of Morocco, Rogue Nation never let up for a second. While not giving anything away regarding the relationship between Ilsa and Ethan, I can say there were some well-worn spy film troupes that got their fair share of massaging in this film. But they didnt choke it to death.

Every spy movie has to have a lovely fem fatale on deck. While Rebecca Ferguson isnt the most obvious or convincing choice at times she does an adequate job. But many of my frustrations with the character had little to do with Rebeccas acting but the manner in which she manages to betray everybody in the film at one time or another then return to their good graces.

Alec Baldwin does a good job as a joyless government stiff hell bent on shutting down the IMF and absorbing all of their assets into the CIA.  Not a role with much meat on the bone for Baldwin to chew on, but he does it with great professionalism topped with his own signature style. Ving Rhames plays the role of Luther Stickell the same as he ever did; intelligent, discerning, loyal and tough. Albeit, a bit older and rounder than he was 19 years ago.

Some people believe that a great action film really is only as good as its antagonist. While I dont necessarily agree with that, those very same people will find no fault in Sean Harris’ portrayal of Solomon Lane- a rouge former British intelligence agent leading a cabal of specialists from across the globe to foment global unrest and destroy the IMF.  Theyre not particular about the order either. He’s callous, murderous, disenfranchised and all about payback.

None stop action, eye-candy automobiles, death-defying stunts (Many of which Cruise performed himself), Mission:Impossible- Rogue Nation is worth the price of admission.

The Shadow League gives it an A. Its a perfect summer blockbuster.