In real life, the world of international espionage is a deadly game of cat and mouse, spy versus spy, and the like. Films that depict this world fall into two categories more often than not; the super-sleek, stylish and incredible dapper mythos of James Bond, and the almost superhuman, indestructible, killing frenzy-filled stories of the Jason Bourne ilk. However, with Kingsman: The Secret Service, director Matthew Vauhgn finds a happy and bloodythirsty medium but with additionally levels of gleeful absurdity.  Based upon the Mike Millar and David Gibbons comic, Kingsman stars Taron Egerton as Eggsy, a lower class punk from the streets of London who is a Royal Marines dropout and nonconformist almost to a fault.  Living a life filled with petty crimes and petty beefs, he is approached by Galahad (Colin Firth) and is recruited into a clandestine group of superspies who have been protecting Great Britains dignitaries for over centuries.

Just as Eggsy is finishing his training as one of the Kingsman, a megalomaniacal super villain with a familiar real life template named Richmond Valentine, played by Samuel L. Jackson, is taking steps to cull the worlds population to, as he put it, cure the planet of the fever that is humanity.

Much of the early half of the film is rather predictable, following the arc that most spy films follow; a rich and powerful villain, an evil plot to destroy the world, yadda, yadda, yadda. However, Kingsman deviates from that formula with its protagonist. Eggsy isnt a super spy, and he isnt particular smart from a contemporary education perspective. Basically, hes a kid from the hood.

But he is recruited into the Kingsman due to a personal depth that Galahad feels he owes Eggsy due to the latters father having sacrificed his life during a mission when Eggsy was a child.

What he lacks in education he more than makes up for in ingenuity. During the training phase, Eggsy constantly outwits, outsmarts and out-toughs all of his peers.

Also, being from the poor part of town, his character feels at odds with the way the world is tiered along class lines and mentions it throughout the picture. It is this angst that often causes him to stumble, but it also drives him to protect his mother and loved ones from those that would do them harm.

The Kingsman have unlimited funding and are independent of any government or international party. Thus, are free to operate without impunity. This makes them the perfect group to take down Valentine and his gang as they kidnap world dignitaries and celebrities en route to unleashing their diabolical plan. Speaking of henchman, Valentine is protected at all times by his femme fatale bodyguard Gazelle (Sofia Boutella). She is beautiful, she is deadly, and loyal, and shes doing it all with razor sharp foot prosthetics that double as knives in the thick of the moment. 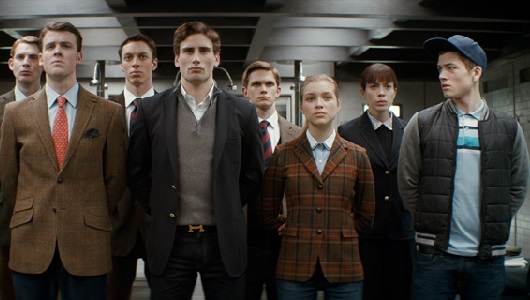 Kingsman also stars Mark Strong as Merlin. Like the mythical wizard of centuries ago, this Merlin supplies the Kingsman with an assorted allotment of weapons, bulletproof suits, gadgets and other technical support. As the film begins to crescendo into an apocalyptic event, the Kingsman find themselves staring down failure and its up to Eggsy to pull them out of the fire.  It wouldnt be too much of a spoiler to suggest that the good guys win in the end. However, the manner in which they save the day will totally blow you away. I would say that Kingsman: The Secret Service is nothing but good clean fun, but it isnt. Its raunchy, its uncouth, its bloodthirsty and its just what the doctor ordered. Don’t take it too seriously. Its everything but gentlemanly. The Shadow League gives Kingsman: The Secret Service a solid A.