In Get Out, first time director Jordan Peele crafts what can only be called a masterpiece.

Starring Daniel Kaluuya and Allison Williams, the story revolves around Chris Washington, a photographer who has been dating girlfriend Rose Armitage for four months. Despite the warnings of his best friend Walter, Chris and Rose drive from their own urban dwelling to her parents home in their suburban lakeside residence.

Her father, Dean, is a neurosurgeon and mother Missy is a psychotherapist. Get Out taps into a vein of black struggle that even some other black folks fail to detect. In American history, whenever black people have allied themselves with whites throughout history, it has been in a white first paradigm, with a few exceptions.

Opposite the hateful, ignorant and historically bloody, we find the idealism of the American liberal. From an interpersonal perspective, these allies appear to have one’s best interests at heart. Many of us champion them and cheer for them. But, from a social paradigm, that liberal white ally has his own best interests at heart, and will only wish to see himself on the top rung of any circumstance as it pertains to Blacks in America.

This is not a controversial statement, dear reader. This is an American fact.

Every culture has things that frighten them. Perhaps irrationally so, but hearing your girlfriend say, “My parents wanna meet you,” would give me coronaries in high school and college. But it was exponentially more uncomfortable when the girlfriends were white. Because I already knew it was going to be weird as hell for me. And, with a couple exceptions, it was always weird. Either they were way too nice, or irrationally uncomfortable. Both behaviors gave me the creeps. I once had a girlfriend’s father ask me did I want to go hunting with him. Yeah, so, the angst of ‘going to meet white parents’ is a palpable, and sometimes deal-breaking concern for a lot of brothers. But that’s just one layer Jordan Peele slices into.

Mind you, I’m writing this trying to be as spoiler-free as possible, but hypnotism is a key component in the plot of the film. The protagonist is made more suggestive to hypnotic commands by revealing an underlying, hidden pain when prompted by a stimulus. In the context of the film, the pain for Chris is the guilt of feeling responsible for his mother dying when he was a child. Missy seizes upon this pain to manipulate him and subdue his free will, putting him in a state called ‘the sunken place’. 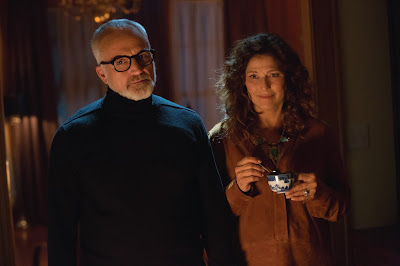 In the contemporary mind of many Americans that fall into the African Diaspora, much of our pain reverberates from America’s original sin – slavery. And there are many who have seized upon that pain and manipulated it to their advantage as well. Another significant and striking artistic affirmation to real world phenomenon that some black folks fear has to do with white liberalism being more about satiating and controlling black longing for independence and not real justice.

And, indeed, that same scene can be interpreted as a fictional reflection of how some of us are really just black on the outside, both in thought and action.The editing and cinematography added to the eeriness of the entire film.

Despite the many well placed comedic interludes to the mounting tension, the chill factor remains at a constant -32 degrees Fahrenheit. The entire cast was brilliant, but I feel like Daniel Kaluuya was exceptional as Chris. His ability to sell emotions; fear, anger and helplessness, with his face was instrumental in for various scenes, as well as the film overall.

Actress Allison Williams plays the manipulative and conniving Rose, who represents yet another boogeyman to the Black experience. The nefarious white woman whose goal is to gain a brother’s confidence, and even his love, only to manipulate him.  Yes, this takes place in all cultures and settings, but for us it has a great deal of cultural and historical context as well.

Actor comedian LilRel Howery was amazing as best friend Walter, and is certain to be in many more quality offerings after this. With elements of Alfred Hitchcock and Rod Serling, Get Out is one of the smartest, scariest psychological thrillers I’ve seen in my life. What scares us partially defines who we are.

That being said, this scared the sh*t out of me. Bravo, Jordan Peele, Bravo!