One of America’s favorite summer time movie genres is the shark-based horror film, with the classic film Jaws in 1975 being the Gold Standard.

The Shallows, starring Blake Lively, is looking to follow in that tradition. It’s about a young woman looking to connect with her deceased mother. She visits a secluded beach in Mexico where she took photos while pregnant with the protagonist.

Just before the press screening at AMC Regal in Times Square, I quietly chanted, “Let’s go shark! Let’s go shark,” while standing in line for popcorn.

Truthfully, I really didn’t care about yet another beautiful blonde actress glistening in the sunlight in all her privileged obliviousness. But this was a bit more than your typical mindless chomp-fest, and it was made apparent early on. 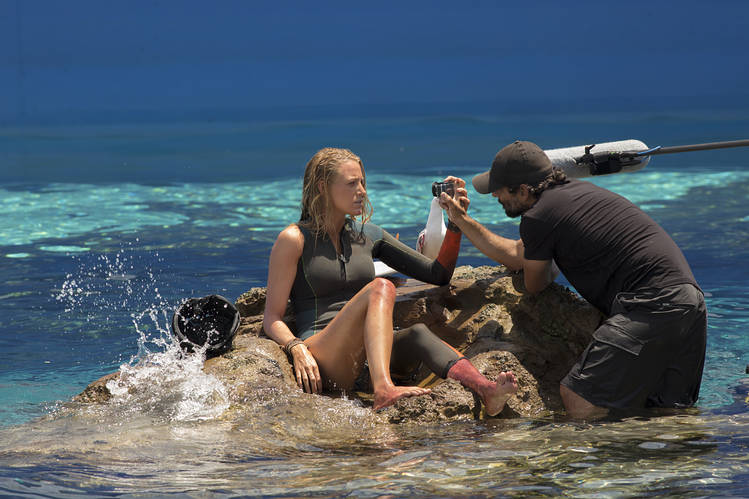 I recently spoke with director Jaume Collet-Serra (House of Wax, Orphan) about his recent foray into this treasured yet well-worn piece of American cinema to gain some incite on his creative thought process.

The Shadow League: This is a well-worn genre, the shark movie. What are you trying to do in The Shallows that hasn’t been done in other shark movies?

Jaume Collet-Serra: For me, I’m trying to be fair to the script and to the character. This movie gets started where other movies finish. Usually the attack is the last thing or somebody gets attacked then the movie gets started.

For me it’s about trying to tell the story. It’s a very contained movie. You don’t really see the shark for a long time. I try to portray the shark in the most realistic way possible for most of the movie, but towards the end you kind of have to have those movie moments.

TSL: Fear drives this movie. Can you explain how you culled this resource?

All movies need an arc. The fight is an expression of the character becoming strong, and that’s when it becomes a movie. Other than that we tried to be very minimal in the action part of it. Other shark movies don’t show the shark either because it’s difficult and expensive.

TSL: Explain what it was like to shoot in an environment that left you with limited angles with which to work?

JCS: The whole movie we only used like two angles, (horizontally or vertical) and it was really, really tough. I think it’s very important for (viewers) to know where they are in time and space. It’s very difficult shooting in water because you need references. That’s why when above the water, I thought it was important that she wouldn’t just have horizons, but rock formations so you can have a sense of reference.

So, she has rock formations, horizon and beach to give a sense of tension. Establishing geography is very, very important. That’s why we used the surfboard with the face. Not because it’s cool, but because when you see the surfboard that establishes geography.

Also, it’s all about rhythm. You play with the minds of the audience. They have been scared by movies before, they’ve seen shark movies before, they expect for it to be done in the same way. But, like a comedy, you have to do the unexpected.

TSL: There are many metaphors for the viewer within this film. What is the main one, in your opinion?

This is a movie about young people, for young people, that are going through certain things for the first time. She crosses certain boundaries because she felt she needed to be tested. She crosses into the shark’s territory, the shark didn’t go looking for her.