Draymond Green took his respect back as a basketball player in one mighty five-game stretch.

His brief fall from grace, as Golden State struggled through an intense, tumultuous, seven-games series with OKC, was another life lesson for a guy that has no turn down.

The way he regrouped and re-asserted himself as a leader and kept coming 100 mph is classic. And after last nights 28-point performance in Game 2 of the NBA Finals, in which he unmercifully and emphatically terrorized the Cavs, he is all the way up.

Hell never get the commercial props that scoring Gods like Chef Curry and KD get, but informed basketball domes understand that his value as a teammate and player is on par with that of any superstar in the league.

Since Draymond shed 20 pounds following the 2013-2014 season and was inserted into the starting lineup on a full-time basis, hes become the teams most valuable asset. Golden State is averaging an unfathomable 70 wins per season as hes become the heart and soul and pulse of Dub Nation. The Warriors went 67-15 and won it all in 2015. This year they eclipsed MJs Bulls and went 73-9.

Hes the engine.  said Sports Guru Champ, who has followed Green throughout his career and coached against him in high school.

He does everything LeBron does as far as playing within offense and keeping the ball moving, but his teammates love him. They feed off his emotions and they know how to play with him. They don’t feed off LeBrons emotions. He has none, Champ bluntly stated.

“Draymond is one of the best players in the NBA because he doesnt believe anyone is better than him. If LeBron had Draymonds attitude, hed be the greatest athlete ever, not basketball player…athlete. Draymond is special.”

I thought it was interesting that Champ would give a Tom Izzo player such props, considering the fact that his relationship with Izzo and Michigan State appears rocky at best and he’s been publicly critical of  T-to-the-Izzo over the years.

“Everybody thinks I’m an anti-Michigan State guy. I’m not, Champ told TSL. I just don’t like their style of play. But Tom Izzo always gets his basketball team to play hard.”

“But dont get it bent up…the development of Draymond Green… Tom Izzo had nothing to do with it. Draymond played the same way he plays now in high school, he was just 30-40 pounds heavier..He didn’t play like that in college because he wasn’t allowed to…Just in spurts. Draymond Green is the ultimate leader he has all of the qualities that define a winning, super basketball player. Heart, IQ, toughness, attitude.” 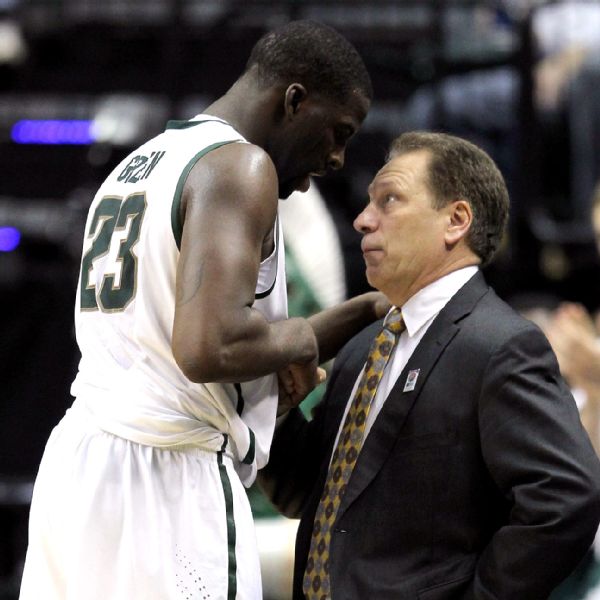 Green is the poster-child for the belief, If we aint talking wins and losses, it aint all about the numbers.

The problem with these new guys …these new GM’s, new reporters and writers… they are the new age analytical guys and the only thing they look at is numbers. How many shots, assists, rebounds a guy has…with terms like PER Player Efficiency Rating (a catch-all stat that aims to capture a players overall production). These guys dont know the game of basketball,” Champ insisted. “They cant break the game down and tell you how it feels. They have no understanding of how incredible and selfless a general Green is on the court.”

Green has one of the biggest IQ’s in the game. He is the first point-power forward. Other guys have gotten credit for it, but hes mastered the craft. He knows how to play the game AND hes a tweener at 6-foot-7, who could have gotten lost in the NBA sauce.

It took an innovative mind and a person with a cultural understanding of Greens demeanor, personality and motivation to allow him to express himself and assert his talents without changing his authenticity as a player.

“Thank God for Mark Jackson, who was able to give this guy an opportunity, Champ said. “On top of what most of these scouts consider physical limitations, hes a second round pick with a big mouth and hes black and from the inner-city, entering a corporate world where white culture sets the standard of behavior. Mark allowed him to keep his identity and build his confidence and the rest is history.”

The first time Champ laid his eyes on Draymond Green was at a Christmas Tournament in the 06-07 season. Champ was assistant basketball coach at Detroit Redford (2005-07). Coming into that game Redford was the back-to-back defending city champions and former NBA player Manny Harris was considered the No.1 player in the state.

Said Champ: “Draymond was clearly the best player on the floor that night. When I left the building, ” I said Draymond was the second coming of Antonio Gates. A future Hall of Famer.”

He was a monster.

When Green was at Saginaw, they didn’t make it out of the state districts in his sophomore year, but Green made promises that they would make it back there and win the next season. True to his word, Saginaw won the title in 2007 and then repeated in 08. He went 52-2 in his last two years and defeated the squad with a Detroit’s Mr. Basketball on it each year. He beat Redford in ’07 and Pershing in ’08. He is known to be the giant killer.

You saw his championship pedigree right there. The will win to win, the understanding of how to get it done, the leadership and confidence to make a promise and prove good on it. That cant be explained with advanced analytics.

People also forget that Draymond was offered a full ride to Kentucky, but turned it down to stay at home and play for Tom Izzo, Champ added. His biggest issue was getting the weight off of him. Once he got the weight off he was going to be a great ball player.”

Another sports media boss, whos also an MSU alum and covered Green every step of the way, told me that the thing that stands out about Greens time at Michigan State was that, Draymond absolutely hated to lose. And I know a lot of players say they hate losing, but for Draymond, its no cliche.

His transformation during the Western Conference Finals proved that much.

Down 3-1 to OKC, Draymond was going through a rough stretch and fans, Stans and shock jocks were switching up on him faster than Curtis Granderson turns on a fastball.

They did that and are still winning five games later as they are making quick work of Cleveland, up 2-0 in the NBA Finals after Sunday nights 110-77 licking of King James and his court.

At the end of the day, real recognize real.

Kobe texted him after Golden State went down 3-1 in the Western Conference Finals and Green went 2/16 from the field, with 10 turnovers and only five assists in two games.

Green responded with his best game of the series, chipping in 11 points, 14 rebounds and blocking four shots as he also flexed his defensive muscles. And he hasnt stopped balling out since.

“Again I give all the credit to Mark Jackson because if it was another coach, Green probably would have been out the league,” Champ stressed. “A lot of guys get in the NBA and get soft because they try to fit in rather than be themselves. And guys like Steph Curry, Klay Thompson and David Lee accepted Draymonds emotion and confidence and passion, and all that it entails, because the coach accepted it and now its paying off.”

The NBA is full of rich guys with watered down games. Draymond Green is bringing basketball back. He doesnt play cute ball. Hes not a numbers guy. Hes a blood and guts guy who intellectually understands the game and dismantles and dissects competition like Troy Ave and Bobby Shmurda destroy promising rap careers.

Hes a kid from the inner-cities of Michigan who got an $80 million NBA contract, came back and played even harder the next season. No amount of championships can erase the chip on his shoulder. He’ll let you know it himself, ” I got heart.”

Props are due and Draymond Green is sending a powerful message to the Cleveland Cavs, haters, fair-weathered fans and guys who make numbers matter more than the people who feed the games growth. Your soul is required.