As part of his continued mission to erase anything President Obama has done from the history books, newly elect Prez Trump — increasingly know to the world as Agent Orange — has said he will not continue the tradition of filling out a March Madness tourney bracket on ESPN as Obama did the past several years.

The network reached out to Trumps staff and invited the president to continue the wildly popular tradition of filling out a bracket on-camera. The network recently received word that Trump has walls to build, Mexicans and Muslims to deport and will reportedly pass on the NCAA bracket.

This is more about Trump laying his own kind of sports legacy than him not being a sports fan.

Obama hosted an ESPN crew each March and filled out brackets for both the mens and womens tournaments. Two of those brackets are now property of the Smithsonians National Museum of American History. 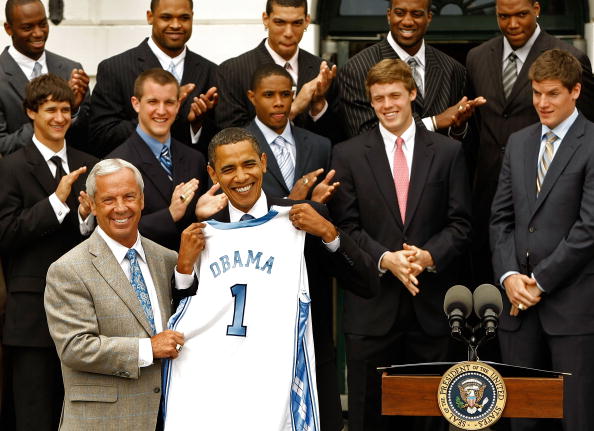 Trump actually has a long business relationship with the universe of sports that exceeds Obamas. Obama is just a more passionate fan of basketball and studies the actual craft for personal satisfaction not financial gain.

Hoops expert Andy Katz often helped Obama through his brackets and said Obama had conversational knowledge to offer his own analysis on the NCAA tournament for the mens and womens game. Baracketology was a success because it was clear he was a fan of the sport and the NCAA tournament, like millions of other Americans.”

However, according to The Washington Post, Donald Trumps name is on 17 golf properties around the world, and he claims to be a three handicap. He was a skilled first baseman for the baseball team at the New York Military Academy in the early 1960s and also competed in basketball, football, soccer, bowling and wrestling. Years later, he owned a professional football team in the short-lived (but talent-producing)  USFL and staged cycling and powerboat racing events.

White House spokeswoman Hope Hicks said in an email to The Washington Post: We look forward to working…on another opportunity in the near future.

If its about that paper, Trump will be all in.