As Senior Director of Supplier Diversity and Strategic Sourcing at MLB, Brooklyn native Corey Smith has a publicly unheralded job that awards him great power, influence and essentially makes him a tastemaker in corporate sports America.

In every aspect of corporate America there should be diversity and inclusion just across the board, Smith told The Shadow League in a recent interview, shortly after he attended the annual MLB Winter Diversity Summit at the Gaylord National Resort in D.C.

If I can walk past a conference room on any given day and only see one type of person, Smith passionately said, “whether it’s a room full of white men or women or whatever, then something is wrong with that picture.There should be diversity in every room…There should be women in every room and people of color in every meeting. So my ultimate goal is that people embrace diversity of thought. This is not about sports, what color you are, gender, sexual orientation, religion and not about your politics at end of day.

We should be appreciative of diversity of thought because that’s what drives innovation,” Smith, who secured the position with MLB in 2011, told TSL. “If you have different thoughts in the room somebody will come up with an idea that everyone can build off of… and that only happens when you have different cultures, lifestyles and backgrounds in the room and all that comes into play when creating innovation, efficiency and awesome ideas — building businesses. If every organization really embraces and utilizes diversity of thought in their overall infrastructure and operations I think we are doing a great thing. Universal diversity is an ultimate goal for Smith and his perfect vision for corporate board rooms across the globe. In the meantime, he meticulously and effectively influences how MLBs billion dollar business spreads its wealth while helping to shape the philosophy of this process.

Only two things affect your net profit; either the money you’re bringing in or the money that’s going out the door, Smith told The Shadow League. “So I’m focused on controlling how much money is going out the door at any given time and like I said, to be able to do that and inject diversity into the situation is a win-win for all involved.

During the summit a specific track of events and engagement opportunities are created between diverse suppliers, MLB Procurement and key decision makers to increase the possibility for purchasing transactions. The diverse suppliers included current as well as new Diverse Business Partner suppliers to MLB.

Corey Smith was this years moderator for the How To Do Business with MLB panel. The panel was a discussion on how the procurement process works within the League, what the teams look for in selecting a supplier and how suppliers can have opportunities to work with MLB.

It’s an extension of meaningful measures baseball has taken to root out the systematic oppression that still exists within corporate structures. It’s also a focus that affects far more lives than what’s happening on the field. 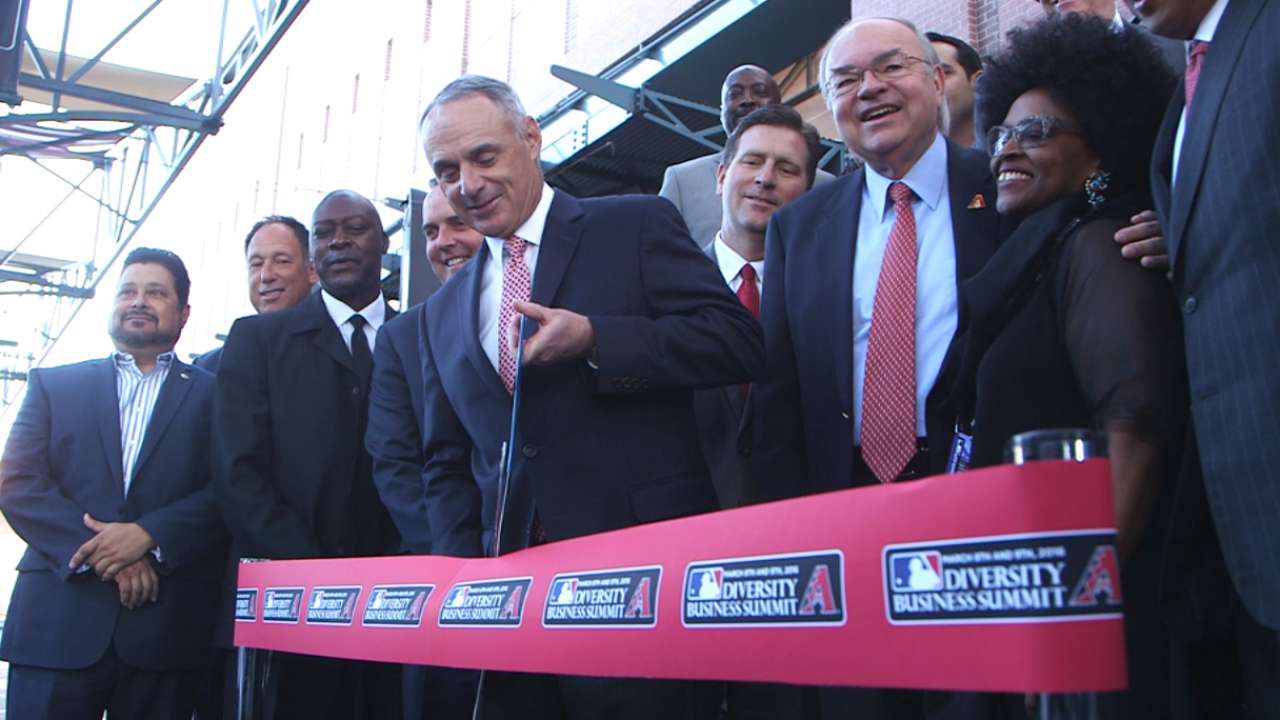 Smith is the leader of this vital function of baseballs multi-faceted conglomerate.

My overall job scope with MLB…I’m responsible for the 30 clubs, the Commissioner’s Office, MLB Network and Advance Media, which is our digital area…just ensuring that we have procurement processes on how we purchase goods and resources around the league and make sure we are efficient in doing so.”

Smith says the diversity component of that is to make sure that a subset of people MLB conducts business with falls under the category of diversity, whether they be minority-owned, women-owned, LGBT-owned or veteran-owned.

Out of all products MLB buys, from promotional products to office furniture and anything from light bulbs to bobbleheads… we make sure that we’re getting the best product at the best price and also doing business with diverse businesses in the landscape as well.

MLB is the only sports league with full-time dedicated supplier diversity professionals with the exception of the USTA. The other leagues focus on supplier diversity as a part- time or event specific initiative such as NBA All-star, or the Super Bowl.

“We have a lot of suppliers who start small and by just having MLB as a client we help them grow their revenues and their overall business such that they are hiring more employees just to service our account,” Smith said. Smith was the perfect candidate for the position when MLB decided to increase its dedication to improving, expanding and diversifying its business philosophies. Smith says hes been doing procurement for well over 20 years.

Prior to joining MLB, Mr. Smith worked at NBCUniversal as the Director of Supplier Diversity where he grew NBCUs diverse spending over 400% in a five-year time span.

This is actually the fourth or fifth company Im doing this for, Smith told TSL.  “Halfway through my career this idea of supplier diversity landed in my lap and the idea that I could be doing something really good for the company in terms of helping save money while at the same time helping and grow diverse businesses across the country. It’s a win-win for me and it’s really about the economic impact of a major corporation’s ability to influence, grow and develop the small business economy in this country.”

Smith also serves as Board Chair for Diversity Information Resources (DIR), an organization that focuses on developing and supporting supplier diversity programs by enabling both the corporations and the suppliers to achieve their goals. Another of his many positions of influence is Vice-Chair of the board for the NY/NJ Minority Supplier Development Council.

Smith, who holds a BS in Mechanical Engineering and a MBA, both from Columbia University, is a first generation child of parents who immigrated from Panama and didnt speak a lick of English when they came to America. Despite the language barriers, his dad knew the value of hard work.

Said Smith: “Diversity is something that has been passionate to me before I even realized that there was an actual term for it. My dad was an entrepreneur and ran his own small business Brooklyn, NY for 40 years. He ran an auto parts store in Park Slope. Six days a week for 38 years that man worked hard. For me, he’s the classic American success story.

“He had to learn English and started out working for the guys that owned the business, literally sweeping the floor and rose up through the ranks. When those guys were ready to sell he was able to — with family help and some support– be in a position to buy the store from them.

Then the building that it was in, the landlord kept raising the rent…so again, blessed and favored my dad was able to buy the building. As young minorities growing up we don’t hear enough of these stories but for me it was daily life in my household.”

Smith was never a huge baseball guy and wasnt very good at it. His Dad was a huge fan, but a grueling work schedule took precedence over his kid’s recreational sports. Instead, Smith absorbed his father’s work ethic and is now a master at making the numbers work and satisfying a corporations financial goals.

There is a plan and process behind everything in baseball, even the rarely-discussed supplier diversity side. While he loves his job, Smith says theoretically hed love to see a day where there’s inclusion and minority participation across the board and his position wouldn’t even be needed.

Until then he’ll just keep making sure everybody eats.