Nobody minced their words during the press conference for the Terence Bud Crawford vs Hammerin Hank Lundy fight scheduled for February 27th at MSG and airing on HBO. The two fighters challenged each other, traded insults, disparaged each others boxing skills and got downright gully at the pre-fight media gathering promoted by Top Rank at Chase Square in Madison Square Garden on Tuesday. 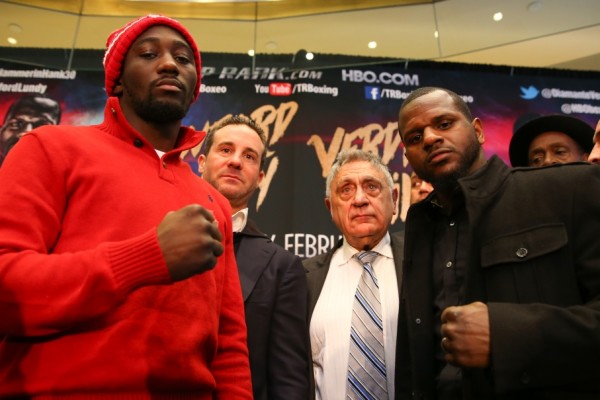 Crawford (27-0, 19 KOs), The Pride of Omaha , the 2014 Fighter of the Year and a two-division world champion, will be defending his World Boxing Organization (WBO) junior welterweight world title against Top-10 contender Lundy (26-5-1, 13 KOs), of Philadelphia, PA.

Crawford accused Lundy of being a fake tough guy who shows up for the cameras, but not the actual fights. Crawford, flanked by his right hand and co-manager Brian McIntyre, challenged Lundys record, highlighted his five losses and questioned his heart.

You like the boy who cried wolf Hank, Crawford said looking back at Hank from the podium. Every Time you lose, you got an excuse. You talk about how street you is.We heard about you getting socked up in the gym and not doing anything. But when you look at me in the eyes…you heard about my background..you know it’s real.

Crawford, one of our TSL Leadership Award winners, is one of boxings rising stars. I interviewed him in 2014 before he successfully defended his WBO lightweight title on HBO in his hometown of Omaha against Raymundo Beltran.

The piece, The Hitman of Boxing Horticulture is Terence Crawford, provided an in-depth look into the life and career of a man that exudes star power, but nobody seems to want to fight.

Lundy, a tough journeyman, who has mixed it up with some dangerous fighters in his career, doesnt like being presented as a second or third option for Crawford, who has his eyes set on some mega fights after disposing of Lundy.

Lundy, however, intends to bring the belt back to Philly.

When reporters asked him his feelings about the fight, Lundy showed the lightening quick, undefeated champion no respect, calling Crawford a sucker.

Hes acting all big and bad, Lundy told The Shadow League. …walking down the escalator like hes tough. Cmon man…I say one word and its over for you, but I want this fight, so Im not going to do none of that. I tell ya’ll. Im a Broad Street Bully for a reason. Nah’mean? He better take heed. For now Im going to hold the boys off, but when that time comes, Im on his ass…We can take it to the streets but Terence dont want that.

In all honesty, Lundy should be credited for stepping in the ring, when fighters such as Mauricio Herrera, Ruslan Provodnikov, and Viktor Postol all turned down fights with Crawford.

Thats me. Im from the gritty city of Philadelphia, Lundy boasted while sucking on a toothpick. We dont back down

Crawford looks forward to giving Lundy a boxing lesson and  once again dazzling the crowd while leaving a lasting impression and proving his gate presence in the sports Mecca.

Cameron Dunkin, one half of Crawford’s management team, says they are still holding out hope that he will get into the ring with Manny Pacquiao one day.

We also hope to get him two pay-per-view fights this year,” said Dunkin. “Hes ready. Even if Pacquiao was to fight to a draw or lose to Bradley, hed still be a name. Thats the fight that will put Terence in business.

Dunkin says Floyd Mayweather would be a great fight too, but Floyd picks his fighters like women chose their high heels — very carefully. Floyd would never risk his legacy by stepping into the ring and risk an unblemished record at this stage in his career against a fighter that can actually match him in certain technical and physical areas.

Terence just has to stay in the ring and on the grind and winning convincingly, Dunkin told TSL.His time will come. Hell open the door. I know he will.

Lundys camp thinks this fight has a chance to be the top fight of 2016.

In any event, Crawford can give his career another boost by captivating the big city MSG crowd and introducing them to the finest pair of hammer-hands in the state of Nebraska..