A month ago the NFL world thought Tony Romo and the Dallas Cowboys would execute a clean break and the veteran would be released and free to sign with any team he chooses. The Cowboys committed to Dak Prescott as the new face of the franchise and his first-year performance earned him those props.

It’s turning out that Jerry Jones pump faked the entire football world because Tony Romo is still a Dallas Cowboy. Jones wavered back and forth in the press about his intentions with Romo and as rumors of Romo’s imminent departure from Dallas spread throughout the league, speculation exploded about where the former Pro Bowl QB would sign.

As Dallas heard the reports and realized that their broken QB sill had major market value, the Cowboys began thinking trade. Why just release an asset if you can get something back in return for him ?

Team such as Denver and Houston have dragged their feet on pursuing Romo once Dallas hesitated on releasing him and started contemplating trade possibilities. At this point we have an old fashion Texas poker-faced staredown. Reports are that Romos ultimate destination wont be determined until after training camp.

We are in a wait and see mode, said HC Jason Garrett on Monday about Romos status going forward. Hes still part of our roster. We havent made any roster moves,

Broncos President John Elway has been at the NFL owners meetings at the Biltmore Hotel this week and says hes had no conversations with the Cowboys in regards to a potential trade. 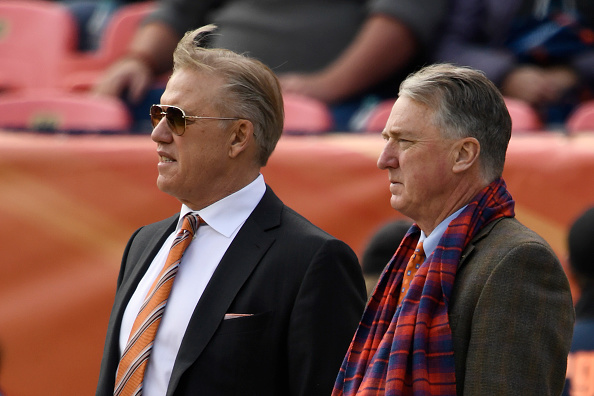 Nope. Same old thing. Hes still under contract with the Cowboys, Elway said on Monday. Like weve said, we really feel good about the two young ones that we have. The plan is to stay the course there and see whats available in the draft. Well go from there.

We know that the Broncos  and Texans would be trying to sign Romo if the Cowboys release him. In the meantime, Dallas is content with using Romo as bait and waiting to see if any suckers emerge that are down for a trade.

Romo has three years left on his Cowboys contract at $14 million, $19.5 million and $20.5 million. Romos extensive history of injuries makes it almost impossible for anyone to assume that kind of financial responsibility on a wing and a prayer.

Eventually Dallas will release Romo because he has said that he wants to be a starter somewhere and his days as Dallas go-to guy is over. The fans have already accepted it. Tony Romo has accepted it. The Romo-loving media has accepted it. It’s time for Jerry Jones to accept the fact that Romo had some tremendous moments as a star QB for America’s Team. The two grew close over the years and there was no bigger fan of Romo than Jones, but those glorious days are gone and its time to cut ties and move on.