Michigan has a “branding problem” and it’s not all athletic director Dave Brandon’s doing.

In the past week, the criticism over the mishandled protocol following Shane Morris’ concussion has sent Michigan fans over the edge. Not only was it the last straw for Brady Hoke, but it’s also brought powerful emotions suppressed by Michigan fans to the surface.

In a world of cutthroat college football, Michigan fans feel like Brandon has commercialized their quaint college football program. He also ruined their student seating tradition, which placed seniors at the 50 and freshmen in the end zone.

With those concerns in mind, it’s hard to imagine Brandon, much less Hoke advancing into the New Year as a team.

The real loser in this is Doug Nussmeier, whose old boss at Washington took the USC job last December. His successor at Alabama, a former USC head coach, has engineered the most potent Bama offense we’ve ever seen. Nussmeier’s 104th ranked scoring offense is setting the new standard of ineptitude and he’ll probably be out of a job in two months.

Brandon’s tinkering with the Michigan Wolverines football product has been presented as the root of the animosity directed towards Brandon. However, let’s be real, Michigan is staler than moldy bread. It needs to be revamped.

As Brandon often opines with advice derived from his venture capitalist experiences, “If it ain’t broke, break it.”

Here are TSL’s alternative solutions to solving Michigan’s woes and infusing its stale brand with a 21st century update.

Jim Harbaugh shouldn’t be the only NFL quarterback the Wolverines are attempting to lure the back to campus.

If the 49ers play in late January, will the Wolverines be willing to wait on a coach and risk tanking the 2015 Signing Day as their remaining recruits ponder the limbo they’re being left in? I doubt it.

Brady on the other hand likely won’t be playing too late into January. Besides who has more cache between Jason Kidd coaching the Brooklyn Nets, Derek Fisher serving as Phil Jackson’s host on the bench of an inelegant Knicks squad. He’ll be the Big Ten equivalent to former Aggies offensive coordinator Kliff Kingsbury. The only problem is getting Giselle to acclimate to life in Ann Arbor.

2. Incorporate Michigan into the Marvel Universe

In the 14 years since the original X-Men Hugh Jackman has become an international icon, replacing Michigan’s muscular carnivore as the pre-eminent Wolverine in pop culture. These things matter. Even director Bryan Singer forced Wolverine to revamp his color scheme for the motion picture because it looked to cheesy for film.

Kids love Marvel. The teens who grew up watching X-Men will appreciate anything linking the Wolverines with Wolverine.

One of the possible autonomy changes coming to Power 5 conferences involves allowing draft-eligible players better access to agents who can give them a better understanding of their potential draft standing. That's more important than ever as the number of undrafted underclassmen has reached record highs in recent years.

Tellem and Pelinka are two of the most prominent sports agents on the NBA side and with the recent trend of sports agents and lawyers.  The hard part will be convincing them to give up their exorbitant salaries. Pelinka went to both undergrad at U of M and Michigan Law School, but he’s only 44. Conversely, Tellem a law school grad could be easier to convince at 60.

The best part is that once the dust settles from these class action lawsuits and student-athletes are negotiating contracts, who else would Michigan want on the other end of the table?

4. If They Can't Reel In A Harbaugh, Re-hire Rich Rodriguez

Rich Rod is 53-15 is the three years before & three years after his time at #Michigan and that includes 4 Ws over Top10 teams.

How’s that Michelin Man the base wanted working out? In the four seasons since Rodriguez was dumped like Quasimodo on the steps of Notre Dame, Michigan has become a basketball school while its football program has caught a flat tire and Rodriguez has hoisted Arizona to new heights. He was never truly given a chance to succeed in Ann Arbor. It took a few years to recruit a whole new style of athlete and in what would have been his fourth yea, Hoke rode the coattails of Rodriguez’s players and system to a Big Ten title.

Michigan's marketing department needs work. Lou Holtz was onto something when he called Charlie Strong a hip-hop coach. Unfortunately, he was inadvertently describing Kevin Sumlin, whom Brandon passed over in favor of Hoke, not Strong. An actual hip-hop coach, as in someone who can recruit artists and celebs to adopt Michigan as their team as Drake has done with Kentucky basketball, could get Michigan more buzz. As it stands Michigan is as insipid as Brent Musburger in the booth with Eminem. 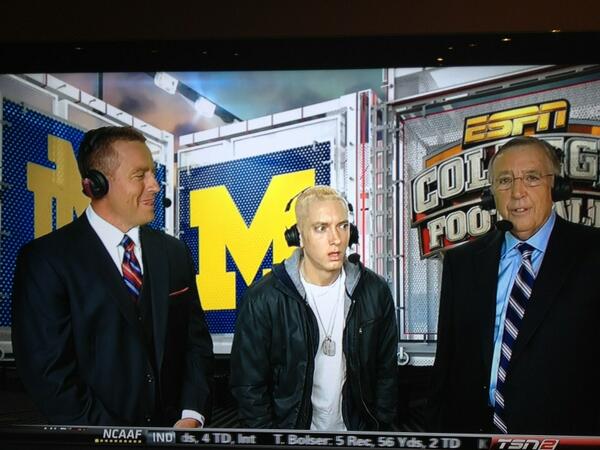 1. Todd Gurley (UGA, RB) – He can leap over a Tennessee defender, but the real question was whether he could leap Marcus Mariota. On Friday morning, Gurley woke up as the Heisman frontrunner after Mariota screwed the pooch against Arizona for the second consecutive year. Those 208 yards he gained against the Vols must be just the beginning if he’ll end the season as the Heisman winner. Like the BCS Top 25, the top spot in this Heisman race is always up for grabs.

2. Amari Cooper (Alabama, WR) – Bama’s No. 1 receiver is still on track to shatter a slew of national records. However, last weekend, there were no defenses to slay. Instead Cooper went one-on-one with the melancholic Tom Rinaldi.

This upcoming week, Ole Miss steps into the Danger Zone. The world is all upside down. Cooper is putting up Michael Crabtree-like video game numbers while Ole Miss is rated as the nation’s No. 2 defense.

Amari Cooper has more yards after the catch (320) and receptions of 20+ yards (10) than Ole Miss has allowed in four games this season.

3. Ameer Abdullah (Nebraska, RB) – That’s right, we’ve got a quarterback-less Heisman top three. Soon enough, the college football Skull and Bones society will prop up a quarterback like a junkie with an itch, but until then Abdullah deserves to be here after rushing for 200 or more yards in three consecutive weeks. This fluctuating list could keep shifting if Abdullah stumbles or excels against Michigan State on Saturday.

THIS IS WHERE HIS JOURNEY ENDS

Mariota did yeoman's work throwing the football, but his 276 yards, two touchdowns, on 20-of-32 passes was nothing flashy in an offense that regularly scores in an instant. On nine rushes, Mariota gained just one yard. On Oregon’s final possession, Mariota had an opportunity to flow Oregon’s offense through the end zone and keep the night going, but he was quickly sacked and mugged before they could even hail a cab. He thrives within the system, but he’s not this transcendent quarterback that he’s been made out to be. For once and for all, Mariota will not win the Heisman Trophy, fortunately, though, he appears to still have the inside track on being 2014’s No. 1 overall pick—whether he actually should be is another story.

Gerod Holiman (Louisville, DB) – Charlie Strong left a few jewels behind on that Louisville defense. The brightest has been their sophomore defensive back.

Or he can disrupt the quarterback—receiver exchange by plucking the ball out of the air, which he’s done more than any player in the nation this season.

Greek frats can steal argon lasers from manufacturing companies and return them on Amnesty Days without facing repercussions. College football players have assaulted, stolen, driven drunk and stomped on opposing players and given nothing, but a slap on the wrist.

However, if you disrupt the pageantry of a major football game during a break in play, that is the limit. Don’t mess with a man’s money and football is a major moneymaker for Ohio State.

Ohio State’s been known to distort their values. Let’s not forget that this is the same school that pushed Terrelle Pryor out the door over the bartering of official Ohio State merchandise he earned in exchange for tattoos and now employs 13 people on their compliance staff.

Urban Meyer’s Florida teams were a catalog of Gainesville’s Most Wanted. At Ohio State

Perhaps it begins with Tracy Sprinkle?

In July 2013 recruit was dismissed for his involvement in a bar fight. Actually, it wasn't the bar fight that earned him his walking papers. Instead, it was the scuffle that occurred after officers advised him to leave the area. The 19-year-old was also found with a sprinkle of cocaine, which he allegedly stuffed into the backseat of a police cruiser.

At a time when professional leagues are cracking down on domestic violence among its player population, The Ohio State is taking a stand against fans who trespass on the field.

By now, the image of Ohio State strength and conditioning coach Anthony Schlegel puttin’ a hurtin’ on Ohio State student Anthony Wunder as he eluded security has gone viral.

If Wunder had shown the necessary lateral agility to sidestep Schlegel, he may have been given access to the field to audition as a walk-on, alas that’s not what happened.

Instead to everyone’s amusement, Wunder got jacked up like a scatback getting steamrolled by Brian Bosworth. However, the bruised bones and fractured ego don’t compare to the additional punishment Ohio State is prepared to administer.

This victimless crime may result in one casualty.

Wunder's fourth-degree misdemeanor may cost him a free education.

Ohio State is reviewing whether to revoke Wunder’s place in the Evans Scholars program for former golf caddies, which begs the question as to why exactly he retired. Carpal tunnel?

Whether or not you think that’s a heavy-handed punishment for a first-time offender in the fourth year of his five year engineering program is a secondary concern. The precedent of his discipline is somewhat incongruent considering the nine lives awarded to the Buckeyes’ felonious faction.

However, he’s not even a collegiate golfer. He’s a retired caddie. That’s the difference between being ambient noise amid 10,000 anonymous faces and being a component of the campus money machine. Money Talks, BS walks.