LeBron James loves attempting to control an uncontrollable environment. Sometimes, this guy is a little too smart for his own good. Then again, maybe hes just the most selfish player in the NBA. LeBron has a legion of fans who blindly follow him and support his every word and action. The people of Cleveland have forgiven him for leaving the city in ruins and bouncing to Miami. He probably feels like a spinmaster the way he got his two titles and was able to come home and save face.

With Cleveland looking like a team that’s good enough to win the Eastern Conference, but a few pieces short of being able to dethrone Golden State, it seems like LeBron is on his BS again.

First, he unfollows his own team on Instagram and Twitter. Then he takes it to a next level by throwing reporters a bone that he had to know they would run with.

On Wednesday LeBron decided to help what is becoming an increasingly uninteresting NBA basketball season by pontificating  about his desire to play with his best friends and fellow All-Stars Carmelo Anthony, Chris Paul and Dwyane Wade and forming a Super Team before his career ends.

LeBron even said hed take less money to get it done.

“I really hope that, before our career is over, we can all play together,” James said. “At least one, maybe one or two seasonsme, Melo, D-Wade, CPwe can get a year in. I would actually take a pay cut to do that.”

Maybe at the end of their careers, James said. Maybe sooner. One more ring chase, this time with everyone on board.

“It would be pretty cool,” James said. “I’ve definitely had thoughts about it.”

“We’ll see, he said with one of his classic Im smarter than you smiles. 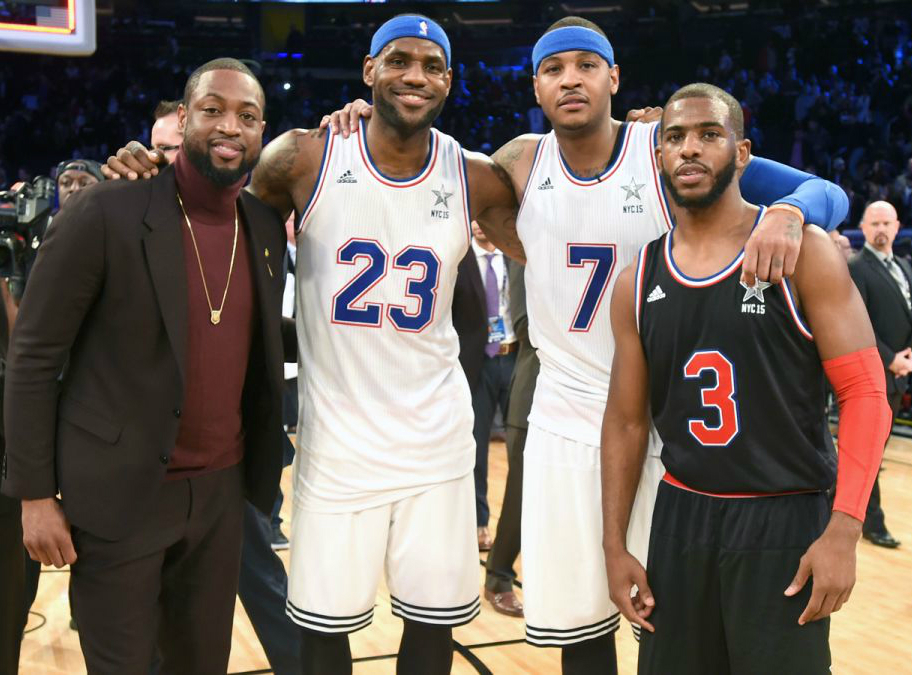 Why would LeBron put something like this out there while the Cavs are still trying to develop that championship chemistry as the playoffs creeps nearer ?

Its almost self-destructive. Its the same behavior his boy Melo is exhibiting by telling reporters different things each week about his health and his relationship with the Knicks. Its just so ironic that as Melo attempts to plan his exit from NY, LeBron disses his team, then slights his point guard and blatantly puts it out there that hes trying to form another Dream Team eventually.

That comment alone has the wheels of possibility churning for fans in Miami, New York and LA. If this Super Team ever did form it would probably be in one of those fancy NBA power markets and probably not in Cleveland.

This is all bad for Cavs fans, who know they desperately need to win it this season because its likely LeBron will bounce if he doesnt win.

Who does this guy think he is? Why does LBJ feel like hes the only guy in the league who can hand pick his own championship team?  Despite his business acumen and success, his basketball ventures havent always been slam dunks. He went 2-2 in NBA finals with Miami and he is 0-1 and looking at a probable 0-2 in the finals with Cleveland.

Im sure Cleveland fans dont care about his plans for the future. They want to hear The Savior tell them that his team looks ready to bring an NBA chip home to Ohio. Instead of creating a positive and confident atmosphere for his team and city, this guy wants to start acting erratically and making folks worry.

According to basketballinsider.com, it’s gotten so bad that coach Tyronn Lue and general manager David Griffin have had conversations with James over the past few days regarding two separate incidents.

Lue spoke with James after Saturdays 122-101 loss in Miami, during which at halftime James was outwardly cordial and excessively chatty with Heat star Dwyane Wade, instead of warming up with the Cavs down by 21. He clowned his team, whether he sees it that way or not, because if anybody comprehends the power of perception and images, it’s LBJ.

Griffins talk with James on Wednesday afternoon was a little more general, but it was reportedly sparked by those aforementioned comments James made to The Bleacher Report about wanting to play with his boys.

Is this the behavior of a King?

It’s almost like LeBron knows his Cleveland team isnt loaded enough to defeat the chemistry, continuity and championship pedigree of Chef Currys Golden State Warriors.  Its almost like hes setting the tone and making sure that the blame for failure lands on everyone except him. If he can’t get it done on the court, he will at least stay relevant in the headlines.

Im sure Carmelo and CP3 love the idea. Paul was robbed of a potential chip when his trade to the Lakers was nixed a few season ago, when Kobe was still killing. Melo feels almost doomed to failure as a member of a dysfunctional Knicks franchise.

However, why should anybody make it any easier for these max-money superstars to win championships? If you take the money to be the man, then lift your team to greater heights. Anthony hasnt made the Knicks any better. He doesn’t deserve to be able to form a Super Team and get a cheap ring.

And LeBron needs to stop getting passes when he starts up with this immature, self-centered, Machiavellian madness. If Kyrie Irving was from Brooklyn, when LeBron came to practice today, he would slap the Akron black off him for his comments.

How are you a leader and the face of the League and the hometown hero talking junk like that? LeBron was supposed to lift Irving and Kevin Love to another level when he arrived. Remember the comparisons to Magic and Bird and Jordan when he was with Miami and gaining a reputation as the Great Facilitator?

Last year he threw a tantrum and got JR Smith and Iman Shumpert. This season he got coach David Blatt axed and shipped back overseas and had one of his sons promoted to head coach.

Where did that uplifting skill go when he got to Cleveland?  Love and Irving are super dope pieces. Lately, an obviously frustrated LeBron has been the great obliterator when it comes to team chemistry, encouraging his teammates and showing loyalty to the fans.