Dont get me wrong. Russell Westbrook definitely deserves his day in the sun . First off, for being half human and part machine. This guy returns from injuries quicker than the hit TV series Empire helped FOX (The KKK of major network news) become the station for black culture (LMAO).

The brother also deserves serious dap for that 41-point, NBA All-Star exhibition he blessed The Garden with .

Five days ago, The Oklahoma City Thunder point guard literally mangled his face. On Wednesday night, he donned a protective mask and looked like a possessed alien, conjuring memories of other masked-marauders, as he racked up 49 points, 16 rebounds and 10 assists in a 123-118 overtime victory over (NBA doormat) Philadelphia 76ers, becoming the first player since Michael Jordan to record four straight triple-doubles .

Its not quite Big O in the 1961-62 season, when he became the only hardwood warrior in NBA history to average a triple-double (30.8 points, 12.5 rebounds and 11.4 assists ), but Jordanesque is the standard for todays Me Generation bucket kings, so Westbrook is floating in rarified air on his way to that two-handed tomahawk.

The mask was a neat, artistic enhancement and the talk of the town, but it has been done before as well. 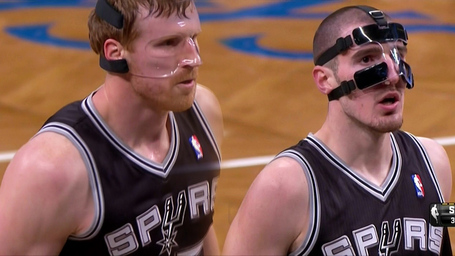 LeBron James rocked the Batman mask in his early days with Cleveland, compliments of a Dikembe Mutumbo smack down. He wore it again to protect a broken nose against the Knicks in February. Kobe Bean Bryant flossed a similar protective mug in July of 2014.

In November of 2013, Kyrie Irving rocked the mask after suffering a broken nose against the Timberwolves.

Rip Hamilton sported it when he was with the Pistons and his Bad Boy championship-predecessor Bill Laimbeer had to wear a clear protective mask back in the head-hunting 80s, when the rowdy forward was regularly catching and dispensing elbows to the grill.

Toughest Man award goes to Manu Ginobili who broke his nose in a game in 2010, taped it up and kept on balling on some hockey player sh*t. 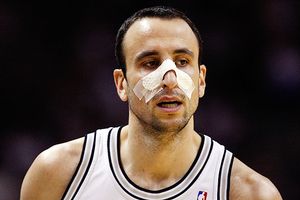 Reports say Westbrook was unhappy he didnt get 50. I say he should be unhappy that the OKC Thunder is fighting for a playoff spot. While Westbrooks streak of all-around court dopeness is worth the praise, it will soon be forgotten, especially if OKC fails to maintain that 8

Its fitting and funky that Westbrook is finally The Man. Finally garnering the deserved recognition as the big-time backcourt scoring stud he knew he was. He hated being considered Kevin Durants sidekick and acquiescing to a guy who he rates a notch below himself as a court-killer. You know he was loving those “MVP” chants. His swag was on 1000 no doubt. He had the shimmy and the shake and the bake. Then he filled the stat sheet up like Ron Jeremy on the coco.

We love individual stats in the NBA. We boost guys pedigree and boast about their scoring prowess, only to tear them down when they dont win any rings or play Alvin Robertson-type defense. We underrate eliteness when the perpetrator of that standard isnt who we choose to embrace. NBA fans are weird as heck. They love to ride a wave.

Remember Linsanity? He was like Bruce Lee in Air Jordans for one mythical NBA month. His first four games out the shoot he was averaging damn near 30. From Harvard to Hollywood, but was he that good?

How about Kevin Durants MVP season when Westbrook was out and he was posting 40-point games like he was Wilt Chamberlain. Individually, he got his props. The NBA community raved about his George Gervin smooth game and Larry Bird range. Some even inched him ahead of Lebron as the games premier player. Since when do we anoint ringless ballers as the best in the game? Not often. You usually have to be a 6-0 white, point guard to get those props.

The NBA is the one sport where you can never be called the best player if you dont rock any bling. But when these young, aerodynamic, ultra-athletic guys get in a mind-boggling zone, we all begin to project and compare and get giddy, because we all want to see the next Jordan or Kobe emerge. We want one player from this new generation of ballers (besides the obvious dudeLBJ) to ascend to the top of the food chain and put his hat into the ring as wrecking boy of the league. Wed also love for it to be a guard because they have the flashiest, prettiest games.

This is Russell Westbrooks time to be called the best something. He should beware however, that status and ranking and worth changes every 24-hours in this digital, social media-inspired age, where every opinion is considered a valid one because Mark Zuckerberg and our friends over at Instagram say so.

There are definitely levels to this NBA props machine. If anything, Westbrook is proving that he is on par with any guard in the game. Fans of the former UCLA Bruin are laying back and saying, I told you RW was the beast of beasts.

Its true, Westbrook has a gear and acceleration to the rack that is unrivaled in todays game, especially since Derrick Rose became a walking knee injury. Maybe he was underrated and its good to see the truth come to light. This triple-double streak by Westbrook is a personal victory for a guy that plays like he has shotgun shells on his shoulder. However, doubt still lingers about the chemistry and ability of Durant and Westbrook to figure out how to have these same HOF-type games on the court together, while winning championships .

We loved watching Charles Barkley, Vince Carter and Chris Webber and Allen Iverson and other highflying scorers, but they never completed the immortal journey to a chip.

Westbrook is showing us he can ball like MJ and take a punch like Pacquiao. Now that he isnt the disrespected stepson anymore, maybe he can lift OKC closer to the inevitable dynasty that they were supposed to be building after that 2012 NBA Finals loss.