Down through the years, the mega metropolis of the South has been an eyewitness to major historical and cultural events. Among the highlights which expanded beyond the local limits: Union Gen. William Sherman setting the city on fire during his March to the Sea in 1864. A Baptist minister named Martin preaching of a revolution from his pulpit during the 1960s.

Artists such as Jermaine Dupri, TLC, Xscape, OutKast and Usher spearheading an emerging music scene in the 1990s, reminiscent of the Motown sound, which spawned a new dialect, groove and fashion sense.

On the sports landscape, the ATL has produced some marquee home-grown athletes such as Bobby Jones, Evander Holyfield and Cam Newton just to name a few.

Sports are a standard of Southern culture, but on a national level, Atlanta was labeled as a bad sports city due to the fickle fan base. More times than not, the home venues for the Falcons, Braves and Hawks have seen their share of empty seats. The city has also lost, gained and lost two NHL franchises since 1980. While some elements of the national court of public opinion have merit, true loyalists know theres no denying the pro teams deep-rooted bond with the community.

Perhaps no other team personifies this connection better than the Atlanta Falcons.

From the plethora of Steve Bartkowski No. 10 jerseys flooding the stands at the old Fulton-County Stadium in the mid-to-late the 1970s through the early 80s, to the popular chants of #RiseUp and #Brotherhood, the Dirty Birds embody all the elements of player-fan interaction.

The competition on the field was lackluster after Bartkowskis heyday, but as Hip-Hops Golden Era began to pick up steam in the late 1980s and early 90s as a force in pop culture, the vibe of the genre also served as a bridge to unite the team and city.

While there was a boatload of players jamming to the likes of Run-DMC, L.L. Cool J, Eric B. & Rakim, KRS-One, 2 Live Crew and N.W.A., the teammate who stood as the poster child of Hip-Hop culture and sports was Deion Sanders.

Prime Time rocked thick gold rope chains like Rakim, Slick Rick and L.L. He played with the flair of a Whodini show and had an army of women in his circle that rivaled the video vixens/stage dancers with 2 Live Crew.

He talked the talk and walked the walk as a two-sport athlete playing Major League Baseball, first for the Yankees and then with the Braves.

From his rookie year in 1989 until his final down in a Falcons jersey on Jan. 2, 1994, Prime Time was the most popular player on the team. For some, he stood as the unofficial mayor of Atlanta. He was a personal V.I.P. section in the club, rolling deep with the heavyweight stars of the day. One of his B.F.F.s during this period was M.C. Hammer. The Oakland-based rapper topped the charts with his 1990s pop-rap crossover hit, Please Hammer, Dont Hurt Em. He followed that up with another mega-selling album, Too Legit to Quit in 1991.

The albums lead single, Too Legit to Quit, became the anthem for the Falcons playoff run in 1991. From southwest Atlanta all the way up to Suwanee in suburban Gwinnett County, Falcons fans were dancing and making the hand gesture while screaming the chorus, too legit to quit.

This buzz later inspired Sanders, who was now with the San Francisco 49ers, to drop an album of his own in 1994 dubbed, Prime Time. This forgettable CD produced one single, Must Be The Money. Fortunately, Sanders music career came and went as fast as he returned punts for touchdowns.

Throughout the 1990s, it was commonplace to see stars like TLC, OutKast and Goodie Mob cheering for the hometown squad at the Georgia Dome. These visits werent limited to regular seats or the cozy confines of a suite box.

TLCs Lisa Left Eye Lopes was romantically linked to star wide receiver, Andre Rison. Their love affair was discussed in music circles and on the local news. She also sported a large tattoo with the teams logo with No. 80 on her upper left arm. The intricacies of relationship went from local and Hip-Hop roundtables to national headlines when Lopes set his house on fire in 1994 after an argument.

In the late 1990s, the Falcons and hip-hop embraced a new theme the Dirty Bird.

As a play-on-words of the phrase, Dirty South, the team adopted a new nickname and dance to match the identity. Leading the forefront of this craze was running back, Jamal Anderson. This famed step, which was Andersons trademark end zone celebration, was quickly adopted by teammates when they too crossed the goal line. The height of the dances popularity occurred in 1998 when the team posted a franchise-best 14-2 record.

The Dirty Bird took on a new meaning after Atlanta upset Minnesota in the NFC Championship Game and clinched its lone Super Bowl berth prior to this season. While on the stage after accepting the George Halas Trophy, 53-year-old head coach Dan Reeves joined the team in doing the Dirty Bird. 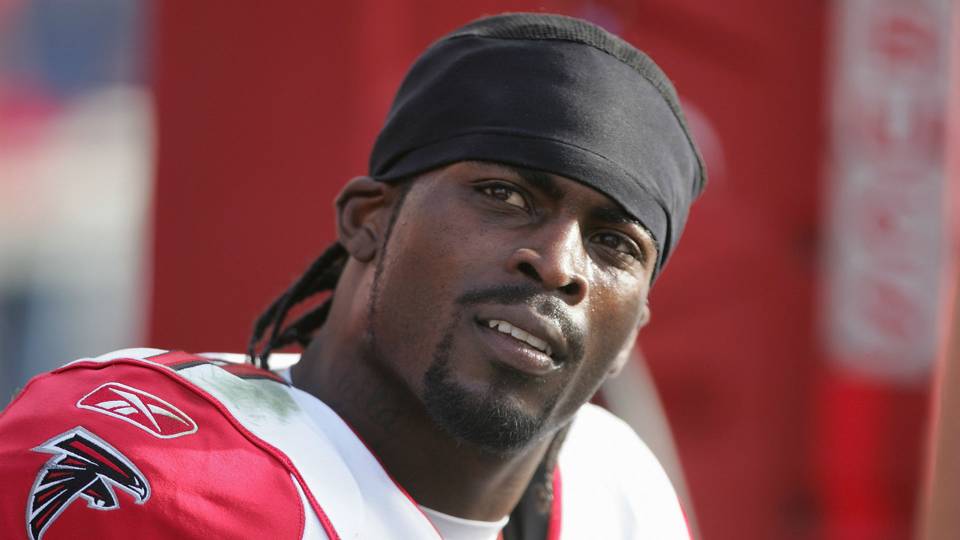 Atlantas infatuation with the Dirty Bird eventually flew away and was replaced by the incomparable Michael Vick.

Although scrambling quarterbacks was nothing new, Vicks skills were the first of its kind in the NFL. Vick was not only the franchise player, but with the help of Nikes and EA Sports marketing machine, he became the face of the league. Despite all the glitz of a $100 million contract and iconic endorsements, Vick stayed true to his raw Newport News, Va. roots. Just like neighborhood icon Allen Iverson, he proudly sported cornrows, tattoos and glaring iced out jewelry.

Both Iverson and Vick were superstars of their respective sports. They also were unapologetic about their Hip-Hop identities, making the world fully accept them instead of conforming to a safe mainstream persona. Sadly, all Vicks fortune and fame vanished after news broke of him heading up a dog fighting ring. He was eventually cut and served time in federal prison.

In the aftermath of Vick, the Falcons struggled with some up and down seasons. However, in 2009, the team initiated the slogan, Rise Up. Led by acclaimed actor and Morehouse College alum Samuel L. Jackson, who was accompanied by a Gospel choir, the team embraced its newest fan-favorite universal chant.

Now, the screams of Rise Up have crossed state lines and are heard in Houston, Texas at Super Bowl 51. Football boldly stands tall as the national pastime. The fanhood of all 32 clubs is intense with people proudly sporting team gear and bragging to the mountaintop following their teams victories. However, while fan bases of the Steelers, Patriots, Packers, Cowboys, 49ers, Giants and Broncos can boast of multiple championships and travel in droves for road games, they lack the unique kinship between Hip-Hop and the community like the Falcons.

Welcome to Atlanta where the players play and Rise Up with flavor. In the A-Town, Falcons fever and the rhythm of the streets are felt from metro area neighborhoods to the nose bleed seats at the new Mercedes-Benz Stadium.