It took a college football team to show us how things can get done when you unite for greater good.

Fed up with the calls for justice on campus by their black brothers and sisters under racial siege, the black players on the Mizzou football team simply stopped.

No practice. No team activities. No game.

There was only one way they would return to business as usual: the school president – who had basically ignored the concerns of black students – would have to resign or get fired.

When faced with a similar moment recently, the Los Angeles Clippers fanned, took the easy way out.

Faced with racist revelations of owner Donald Sterling, the Clippers simply turned their jerseys inside out. Easily, they could have boycotted all playoff games until Sterling was removed from ownership. 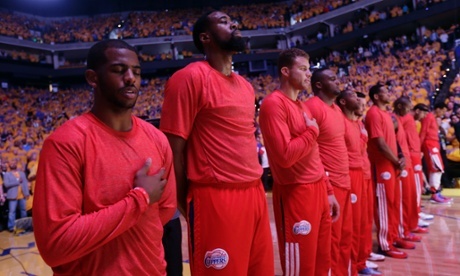 It’s the blueprint black players should now show against the Washington Redskins and their racist logo.

To this point, the players and the NFL Players’ Union have said nothing. That has to change now.

Without question, the Redskins’ name controversy could be solved instantly.

You wouldn’t need Native American groups to protest or picket outside stadiums around NFL America. You wouldn’t need the NFL commissioner to step in and use his ultimate power to get this name change to happen.

All it would take is for all African American players on the team to stand together and demand it.

They can tell Washington owner Daniel Snyder that they won’t play again until the name is changed.

Snyder, who can’t give a good reason on why he won’t change the racist name, told the media it won’t happen under his watch: “We’ll never change name. NEVER – you can use caps.”

We can already hear the cry babies out there, saying why should players have to fight this battle against their boss, possibly losing money.

Many have made such sacrifices to get things changed. It normally takes brave people to speak out about the ills in a society in order for things to get better. Mizzou players are a prime example.

It’s shameful that players have largely remained silent through this controversy.

Actually, it’s pathetic, especially since NFL commissioner Roger Goodell has softened his stance, saying the league should listen to these concerns. NBC sportscaster Bob Costas took on the controversy on a national broadcast between Washington and Dallas. “It’s an insult, a slur,” Costas said.

Even conservative newspaper columnist Charles Krauthammer, not big on political correctness, wrote it was offensive and should be changed.

But the lame union hasn’t said a word. So sad. That organization stands for nothing, never has.

Some might think it’s not our fight. But it is.

The Civil Rights movement wasn’t just about black people, either. And don’t forget that more than just black people put their necks on the line for equality for all.

We wouldn’t stand for a team that was called the Alabama Sambos. Heck, the restaurant, Sambo’s, was forced to change its name.

Why should we accept Redskins when we know what it stands for. It’s unacceptable.

The name is clearly offensive, not a sense of pride for Native Americans.

It shouldn’t be just journalists and reporters staging protest. Some reporters, including Sports Illustrated NFL columnist Peter King, have even refused to write or say Redskins.

We’re not asking for players to get up on a soap box and get involved in matters that don’t concern them or their business. We get it. They are players, not activists.

But when you can change things in your world, the sports world in this case, you should feel compelled to do it.

Sadly, players were willing to stand up for things. Now, they are mostly driven by money, even if they have to ignore what’s right just to get paid.

It wouldn’t be the worst thing in the world to change a team name. It has happened before. Fans will get over it and cheer their team no matter what.

It happened in Washington, DC as recently as 1995. Then-owner Abe Pollin changed the Washington Bullets’ name to the Wizards.

Pollin had compassion and didn’t want to be associated with the name anymore after so many were killed by gun violence in DC.

That’s an owner who didn’t worry about profits, history or stand on silly principle.

Snyder should follow suit. The only people who could persuade him to do the right thing are HIS players.