As LeBron continues to dominate on the court, the debate rages on as to who is the most dominant athlete currently. Our debate took us to the octagon and the clay, where we discuss two athletes who are destroying their opponents and are, arguably, the most dominant today on a long list of amazing athletes.

At the top of the list are two women; unstoppable forces in their respective pro sports- Ronda Rousey and Serena Williams.

Although Rousey and Serena will never face each other in anything in real time action, Shadow League All-Stars J.R. Gamble and Rhett Butler decided to go head-to-head and debate which athlete is the most dominant.

With the recent success of Rousey and the way she is changing the face of MMA, of course Im taking Ronda and her arm bar accuracy over the rejuvenated love for Serena who’s coming off her second French Open win. Both women are pioneers in their respective fields, but Rousey is the future. She is the most dominant athlete we have seen in a long time. Her gender is irrelevant.

Rouseys name is now synonymous with firsts as she is a true pioneer and a major ticket draw in a combat sport traditionally reserved for men to generate the lions share of the income and global praise. Well Rousey began eroding at all preconceived notions from the moment she stepped on the world stage at the Olympics.

In 2008, Rousey won a bronze medal in judo at the Summer Olympics in Beijing, China, becoming the first U.S. woman to win an Olympic medal in the sport. Looking at her lineage this should come as no surprise as her mother, Ann Maria De Mars, had a decorated Judo career and was the first U.S. citizen, male or female, to win a World Judo Championship in 1984.

If I were to list her accomplishments, which of course I will for this tale of bragging rights, before she earned a medal in Beijing you would think her athletic career had peaked and expired. Nope. She would eventually became a World Champion MMA star.

Rousey decided to train and compete in MMA to avoid getting a real job and man was this a home run decision. If there were bonuses for speedy finishes, Rousey would have won it every time as she compiled an amateur career record of 3-0, with each fight ending in the first round, in under a minute via an arm bar submission. From the moment she went pro in 2011 it took her just four fights to be in title contention and those fights all ended less than one minute via an arm bar submission victory. She met Miesha Tate for the Strikeforce Womens bantamweight belt and although the fight went over a minute for the first time in Rouseys career (4:27) she still pulled out the win over Tate with her now perfected arm bar technique.

And the biggest proof of her greatness is that Rouseys performance convinced a former staunch hater of womens MMA, UFC President Dana White, that womens MMA would not only be a viable entertainment option and good business move for the UFC but that it would overshadow mens MMA when she fought. Ronda literally was the impetus to create a womens division in MMA!

Did you hear me?

She IS the reason it exists in the UFC. Ronda Rousey is now 11-0 with two wins coming from KO and she has only gone to the third round once in her entire career. Talk about the G.O.A.T.!

That’s a solid argument from my compadre, Mr. Butler, but Rousey still doesn’t have enough plaques up on the wall to let her run my most dominant record label. She’d still be a VP in training compared to Serena. All of the Sports Illustrated covers and social media hype in the world can’t allow me to realistically place any female athlete of our era above the statuesque chocolate goddess. Sister to Venus and Daughter of “The Legend Maker” Richard Williams.

Serena is not only the most dominant athlete in the world, she’s one of the Top 5 most influential athletes in American history. She’s not a product of the social media age. Her fame and celebrity came from being the first of her kind. Similar to Rousey’s effect on an exclusive, male-dominated MMA culture, Serena’s entrance into pro tennis was impactful. Tennis had never seen a woman who could impose her will on opponents, execute with consistent efficiency and deal with the negative racial component that comes with minority athletes infiltrating and dominating traditionally white sports.

While Rousey benefits from her automatic embrace due to skin color, Serena started her rise behind Eazy-E’s 8-ball. She was black and big-boned and able to meet the standards of a sport that emphasized a combination of beauty, grace and strength. She was from the hood and she was the face of Women’s tennis, and when the American men began to falter and fade out of relevance, she became the face of American Tennis.

In total, she has reached 84 career finals (67 titles, 17 runner ups) defeating a plethora of great female tennis players with comparable skills along the way. Rhett, you credit Rousey’s versatility, switching from Judo to MMA, as part of her extraordinary dominance. Well Serena is equally a beast in women’s doubles (13 titles ) playing with her sister Venus and even has two titles in mixed doubles. She makes cool videos too.

During a career that has spanned two decades, Serena’s endured injuries, age, other interests, the racial and cultural pressure and the taxing effects of supernatural celebrity. At age 33, when most tennis stars are talking about the good ole’ days, Serena still has enough talent, savvy, dedication and drive to accomplish the same feats and dismantle up- and-coming stars as she did when she first bum rushed the game with sister Venus as a 14-year old-martian in 1995 out of Compton California.

The Williams Sisters’ impact on American culture could never be duplicated by Rousey. The number of girls they have inspired to pick up a tennis racket and the way they have carried the banner as a source of pride for the African-American community, gracefully and successfully handling all obstacles (personal or professional), has only been accomplished by a handful of athletes in history. Serena is No.1 on the tennis court and the all-time money-getter among all women athletes having won close to $70 million in prize money (doesn’t include endorsements). That places her fourth all-time among tennis players of any gender or era. Her overall career record of 716-121 clearly expresses the magnitude of her dominance and leaves no competition from any woman in any sport to date.

Rousey is exciting, sexy and good at her craft, but she will have to continue to win, build her legacy and touch people for another decade before you can even begin to compare her with a worthy icon such as Serena.

RHETT: Thumbs Down For Serena Williams 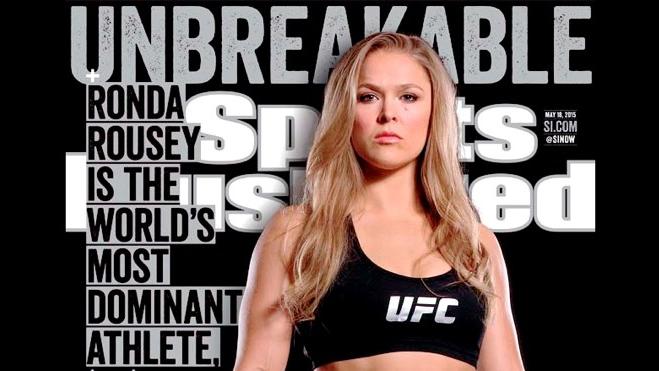 Serena Williams is truly dominant in her own right. Coupled with her sister, Venus, the tandem have been at the forefront of tennis for over a decade and a bit of ring rust, as it were, has always been a problem for both sisters.

But we are discussing Serena today who, although she just won the French Open again for the second time, still pales in comparison to MMAs firebrand champion, Ronda Rousey.

Even Lebron James cant say that.

Now in womens doubles, which she has been competing in from 1999 until her last appearance in 2012, Serena is undefeated showing me that she needs her big sisters help. This is an accomplishment that Rousey has done by herself for a long time in a sport where you are either getting punched in the face or your arm popped out of its socket.

In closing, this comparison is a joke as Rousey clearly is the more dominant athlete because she is undefeated, beautiful in a beastly sport and has only seen the deeper minutes of round one and only seen round three once in her entire young life. The church, and those who watched what Mike Tyson did to his opponents in his prime, say amen.

GAMBLER: Thumbs Down For Rousey

It’s almost laughable to compare a woman with 11 quick pro fights against inferior opponents to a women who has dominated her sport as a pro since high school and is still trucking the comp. Serena has a heavy-hitting 24 Grand Slam finals (20 titles, 4 runner ups) and she’s already won the French and Australian Open this season .

Legends aren’t made in 11 contests no matter how dominant they appear at first. Serena has stood the test of time. She’s not a shooting star that had a moment among the Titans and then faded out. Competition among women in MMA is not at the level it will be years from now.

She’s not even on the level of boxer Christy Martin, who is said to be the most successful and prominent female boxer in the United States and the person who legitimized womens participation in the sport of boxing. Martin’s story is just as legendary too. She began her career fighting in Toughwoman  contests and won three straight titles. Then she whooped ass from 1989-2012, fighting everyone including Laila Ali.

The caliber of Rousey’s challenger pool is thin to say the least. I can’t help but think she is more marketing and promotion for the MMA than a legendary fighter. How would I even know? She makes every challenger submit. Same way Iron Mike did before he met his match.

Some say she’s attractive. She’s white (note: she is part Venezuelan) and she’s blonde, two things which this country traditionally holds as the “standard” for beauty.

Just to do some “most dominant” revisionist history, Mike Tyson was 36-0 and considered — in Mike’s words — “impregnable” before Buster Douglass dropped him. Heavyweight great Larry Holmes won his first 48 career fights, falling one short of matching Rocky Marciano’s questionable 49-0 record, when he lost to Michael Spinks in 1985.

All of these guys were considered most dominant until they lost, but it took years to build up that reputation. Saying Rousey is the most dominant athlete today is totally discrediting Serena and the work she’s put in over a considerable period of time. The world has a firm, clear grasp of who Serena Williams is and what she means to the fabric of pro competitive sports in this country. Serena has won with injuries, with the crowd totally against her.

On grass and clay. Rousey’s true tests of dominance lie ahead, Serena’s already conquered hers.

VERDICT: The best part of this debate is that it will continue to rage on. Fans will go back and forth as to who’s the most dominant, but the greatest thing is that we will all be able to watch these amazing athletes win and dominate for years to come.

And who doesn’t want to watch greatness?