Larry Bird or Dirk Nowitzki. Who would you you pick?

We recently brought the argument out of the barbershop and into our Madison Avenue offices. Shadow League All-Stars J.R. Gamble and Ricardo Hazell make their arguments and debate who’d get the nod if they could only have one of these amazing players on their team.

“Larry Bird and Dirk Nowitzki are two ballers with esoteric swag and a pill game colder than a Polar Bears nuts in the winter.

Their careers were a generation apart.

Bird played in the rough and tough, team-orientated’ 80s and helped lift the NBA to new heights. During his rookie year, Bird led a Celtics Dynasty revival and helped lift the Green Machine from a 29-53 record to an NBA-best 61-21 record. Arguably the best power forward to ever play the game, Bird was elected to the All-Star team in each of the 12 seasons that he played. He was elected league MVP three consecutive years, a feat only matched by Bill Russell and Wilt Chamberlain.

Then Dirk Nowitzki hit the NBA scene right before Y2K hit. His center size and guard shooting ability fit perfectly into an NBA that was based around marketing and endorsement deals, becoming less physical and more isolation-based to feature the teams star player.

They come from different countries and lifestyles, thousands of miles apart.

Bird is the curly-haired legend from small town French Lick, Indiana. He dominated in high school and college, and then helped change the face of modern basketball.

Nowitzki is Germany’s greatest basketball prize. He is iconic on the level of a Bird, and he didnt spend his teenage years destroying boys at Spring Valley High School like Bird. Nowitzki spent his teen years competing against grown men.

He turned pro at 16, playing for Germany’s second-division team DJK Wuerzburg. He earned an invitation to the Nike Hoop Summit where he mashed out on future pros like Rashard Lewis and Al Harrington.

The rest is history.

Both ballers, however, shared a destiny and are cultural icons who defied the mathematical and statistical odds to become modern day NBA legends.

They are both white in complexion, but their prolific basketball prowess oozes a soul in the hole that made them the Eminem of their respective eras. Not only similar in shooting ability, height and fan appeal, but as unique wizards of the hardwood, inspiring generations of ballers.

It can be argued that Nowitzki’s had a larger global impact than Bird. Hes probably the greatest European product in NBA history and entered the league at a time when international players were becoming coveted commodities and the new draft day flow.

If not for Dirk, the NBAs obsession with international stars probably would have disappeared, as many of the international players NBA teams pursued, fizzled and flopped.

Thanks to pioneers such as Dirk, the NBAs international platform and appeal is now the driving force behind its financial and marketing success and popularity. Bird and Magic helped make the NBA an American Pastime. Dirk took it to next levels and introduced the game to fans from places where soccer rules the sports landscape and who would not otherwise care to see a bunch of brothers jumping, dunking and fist-pumping.

Dirk came into the league as a 7-footer with handle, a deadly J and some serious moves to the rack. Forget being Larry Bird. Dirk was the LeBron James of Germany. All of Europe knew he was a prodigy and eventually he became a game-changer.

He’s the blueprint for the way the bigs ball today, the reason why Karl-Anthony Towns has three-point range. Dirk was a matchup nightmare for any forward because of his height and the way he stroked it. He changed the way defenses handled a guy of his length. He got buckets, and lots of them.

Larry Legend is credited with turning the Celtics franchise around and saving the NBA audience by allowing marketing power to pit him against every other black superstar and add a racial and emotional element to every game he participated in and every championship he won.

The Mavericks were always solid, but never loaded like an ’80s Celtics squad. Dirk carries a bigger burden in this new build around one star NBA philosophy than Bird ever did.

As the basketball gods would have it, Mark Cuban was able to put enough pieces around Dirk to upset LeBron James in his first season with “The Big Three” in Miami. Dirk became the first Euro-bread star to lead his squad to an NBA championship in the 2010-11 season.

It was the Mavericks lone NBA Championship, but it solidified Nowitzkis place as an immortal player. With the exception of aging future Hall of Famer Jason Kidd, who was in his 16th season, Dirk was the lone star on a well-balanced team of solid vets.

Theres a lot of talk from fans and prognosticators about max-money superstars winning championships by themselves” these days, as if the game changes or a player improves once they start making $100 million.

Why do you think Carmelo Anthony gets so much heat? Because Dirk did what everybody expects Melo to do and what LeBron James (before he got to Miami) and Patrick Ewing couldnt. Now, any superstar that complains about a lack of talent around him gets labeled a failure, which is messed up because winning chips for dolo doesnt really happen in the NBA.

However, Dirks championship run defied the odds. He was the Finals MVP and he was virtually unstoppable as Dallas defeated a dynastic team that would go on to win two chips in four straight NBA Finals trips. 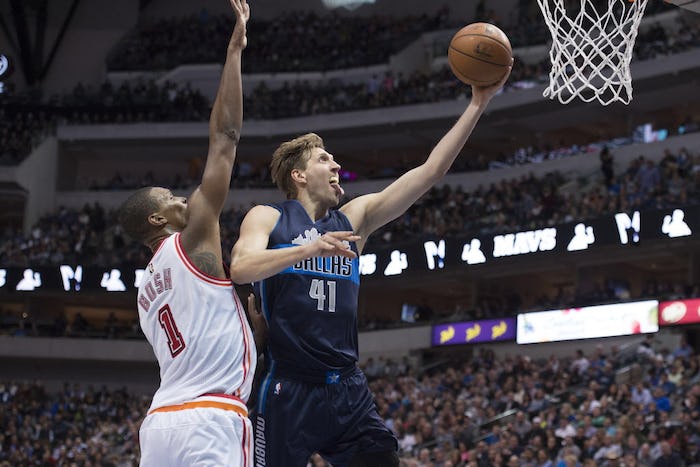 Theres no disputing Larry Birds excellence. As two of the purest shooters the game has ever known, Bird and Dirk have to get props for influencing basketball and planting seeds that have blossomed into multi-faceted perimeter assassins like the 6-10 Kevin Durant and 7-3 Kristaps Porzingis.

When I think Larry Bird, I think, ‘great player on an even greater team.’

But when we use the term One man wrecking crew,” Dirk Nowitzki immediately comes to mind.

I was 11 years old during that infamous fight between Bird and Julius Erving. The normally level-headed, cool customer that was Dr. J lost his composure and started swinging on him.

I remember sitting in my living room yelling at the big-black TV, Kick his a**, Doc! Kick his a**!  Ultimately, it was thr one I who got my a** kicked by my mother when she walked in and found her youngest child cursing like a battle-scarred Marine.

As much as I hated Larry Bird, and the Boston Celtics by proxy, I eventually came to miss him.  When he initially retired, I assumed there would be another funky-fresh white guy to come along to take his place in no time.  It wasnt until 10 years later that I came to realize that would likely never happen again. 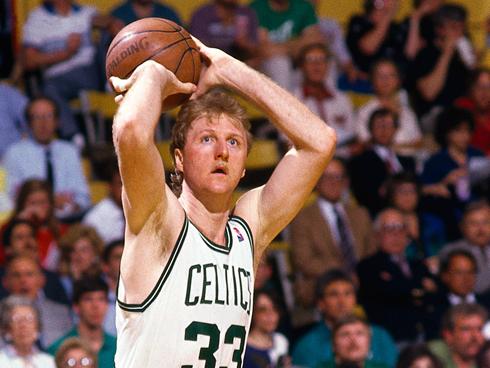 I got my hopes up with Tom Gugliotta before his knee problems, thought maybe Mike Dunleavy, Jr was going to pan out as a go to guy, and even held out hope that Adam Morrison would accept the challenge before him rather than shrinking under pressure of being a high draft pick, which is what he actually did.

I was sorely disappointed by each of those guys. One was injury-prone, the other was mediocre, and the last just wasnt good enough.

But no player reminds me of how crazy Larry Birds game was more than Dirk Nowitzki.   With all of his considerable gifts, Dirk is but a shadow of the player that Bird was.   Bird was the better scorer, the more clutch player, the better defender and he had the ability to make his teammates better.

Are you kidding me? Is this even a contest?

In the immortal words of the late Tony Burton of Rocky fame, Dirk needs to Throw in the damn towel! on this one.  I didnt even mention Birds three All-Defense selections to Dirks none.

Yes, Dirk Nowitzki is a phenomenon unto his own, with his own considerable legacy. But compared to Bird, hes just a pretty decent player from Germany. Word up!

Bird was a better scorer, better defender, better rebounder and better passer. Id say that makes him the better player.”