Its that time of month again. Thats right ladies and gentlefolk, its time for TSL Comic Book Convo Presents to drop some science regarding the whats been going on in comic books, comic book-related films, science fiction and other things pertinent to our nerdy Nephilim. Who would have thought that Tuesday would be your favorite day of the week, huh?

Were pretty sure youve heard by now that the lovely Jada Pinkett-Smith has hinted at not returning to the hit Batman-prequel series Gotham next season. Thats right Fish Mooney fans. Heres what she had to say about the matter when asked to elaborate by Comic Book Resources.

I dont think so, no, said Smith when asked about a potential return. I signed for a year, and the year is up. But, there are some great things coming ahead on Gotham – believe you me, theres a lot of good stuff coming.

Smith didnt reveal exactly how her character might be written out, but an official statement from the shows producers teases that, Fish Mooneys storyline takes a lot of interesting twists and turns into the finale of season one of Gotham.

But this isnt a situation where theyre just going to purge a sister off the show and simply replace her with another Black face, is it? Well, something like that. You see, it has also been reported that actor Chris Chalk will be making his entrance as a young Lucious Fox, played by Morgan Freeman in The Dark Knight and Dark Knight Returns. But we would be derelict in not mentioning that Ms. Pinkett-Smith was purposefully being vague and theres still a chance that Fish Mooney might pop-up next season when we least expect it.

Speaking of next season, recent rumors regarding an Arrow/Flash spinoff appear to be coming to fruition. Well, at least the RUMORS of the upcoming spinoff are starting to bear some kind of fruit.

According to TV Line, the upcoming spinoff is currently in development at the CW and will include Flashs Captain Cold (Wentworth Miller), Firestorm (Victor Garber), and Brandon Routh (Atom) and the original Canary of Arrow (Caity Lotz), who is actually suppose to already be dead on that show. But you know how superheroes get down. Dead one moment, not so dead the next. Heres a brief whiff of the character descriptions as they appear on TV Line.

THE TRAVELER | Described as a Han Solo-esque rogue who gets by with his charm, this hero hails from the future, and has journeyed back in time on a secret mission. His razor-sharp wit hides the pain of a man who has lived through serious conflict. He also harbors many secrets, always leaving both his teammates and the audience unsure of his true allegiances.

FEMALE WARRIOR | This twentysomething Latina is pretty but unassuming, book smart and socially awkward by day. But by night, when she hears the cry of battle, her fury is ignited and she becomes a fierce warrior so much so, that sometimes she can become a threat to others.

MYSTERY HERO | An African-American male in his twenties will fill the role of a regular, street smart guy who unexpectedly gains powers, and then, as part of the team, regularly quips about the insanity of the situations. 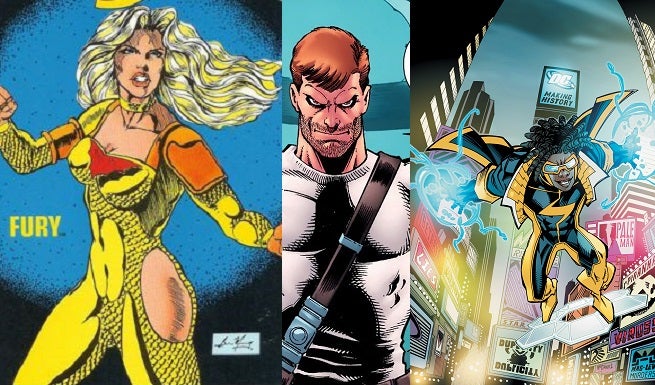 Okay, before we go any further here, we just have to pause and pick fun at that last character description. The line that reads unexpectedly gains powers? We were, like, duh! Who expects to get superpowers? But, for the sake of time, we must digress.

Last and certainly not least we bring news that Run All Night star Joel Kinnaman will take part in Warner Bros DC Comics adaptation Suicide Squad. That news was confirmed by ComicBook.com and Allocine. Though theres no word on who or what role he appear in, early speculation is he will appear as Rick Flag Junior, son of the original Suicide Squad member of the same name who fought in World War II.

The film already stars Will Smith as Deadshot, Jared Leto as the Joker, Margot Robbie as Harley Quinn, Jai Courtney as Captain Boomerang and Cara Delevingne as Enchantress.

Pre-production on Suicide Squad is already underway, and the film is expected for release on Aug. 5, 2016.